The Complete Chess Course by Fred Reinfeld (Unwin Paperbacks, London, 1983) is a compendium of six separate books pasted together to offer a single volume that is good value, if confusing reading.

At a time when 1...a6 is being accorded serious theoretical consideration and Kasparov’s famous remark ‘Chess is not skittles’ is being unfavourably received in the context of 1 c4 g5, it is quaint to read some of Reinfeld’s flat statements on the openings:

Surely even beginners should not be deceived to this extent. And talking of deception, the publisher’s blurb tries hard to make out that Reinfeld is still alive, while darkly calling him ‘a former chess master’.


Annotating a game Judd-Ware in the Philadelphia, 1876 tournament book (reprinted by Olms), B.M. Neill writes of 1 e4 d5: ‘Inferior, and containing the seeds of defeat’ (page 99).


Ed Tassinari (Scarsdale, NY, USA) points out that many assessments of the kind quoted in C.N. 1131 are to be found in the Hastings, 1895 tournament book, edited by H. Cheshire:


Another over-vigorous bashing of the Centre Counter Game is by Burn (BCM, September 1914, page 335). He gives 1...d5 a question mark and writes: ‘Not a good move, as Black, on re-taking the pawn after the capture, has to lose time in retreating his queen.’

‘In C.N. 1131 you quote B.M. Neill in opposition to the Centre Counter. C.N. 1210 contains another disparagement, by Burn. I now offer the peak of the nineteenth century, Wilhelm Steinitz, who wrote in the International Chess Magazine (April 1885, page 116):

“The centre-counter gambit is unfavorable to the second player, being contrary to the principles of development, for it brings the Q too early into play in the centre and allows the opponent to gain time by attacking her with minor pieces.”’

In each of the above cases the player of the ‘weak’ move lost the game.

‘Fairly tried and found wanting, the Sicilian has now scarcely any standing as a first-class defence.’


Ed Tassinari quotes a few comments by Max Euwe on page 32 of the November 1951 CHESS:

‘Bizarre - and Bad - Lines against the Nimzo-Indian Defence’

After 1 d4 d5 c4 one would hardly expect to find a twentieth-century master questioning the continuation 2...e6. Richard Teichmann did so, on page 463 of the November 1906 BCM. Following Black’s second move he wrote:

‘The latest experiences of Masters’ Tournaments shew that after all it is best to accept the Queen’s Gambit at once.’

The score is taken from page 77 of L’ABC des échecs by N. Preti (Paris, 1906), a 566-page volume whose coverage of the main openings was revised by Janowsky. We note in passing that when discussion of the Sicilian Defence began on page 355, the move 1...c5 was given a question mark.


An addition comes from Chess Recipes by E.A. Greig (Stroud, 1914). Below is the book’s full coverage of the Sicilian Defence, which includes, at one point, a question mark for 1...c5: 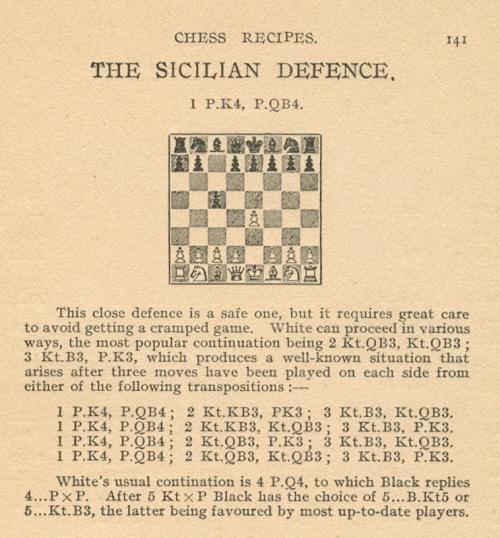 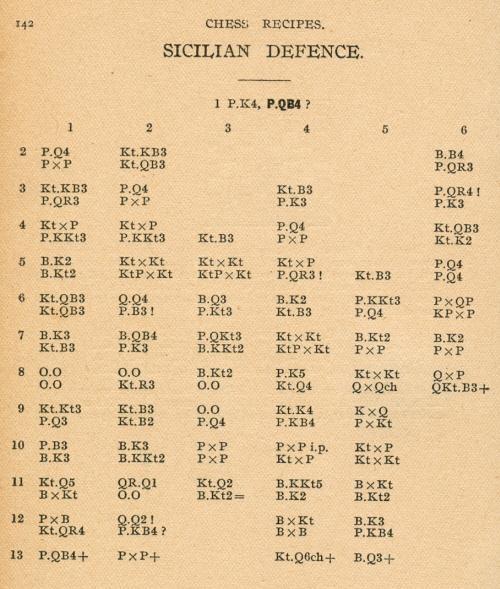 
Olimpiu G. Urcan (Singapore) notes a case of a leading master strongly criticizing an opening shortly before playing it in an important game. Our correspondent sends these extracts from the February 1905 American Chess Bulletin (pages 29-30 and 31 respectively): 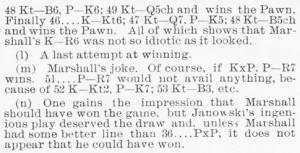 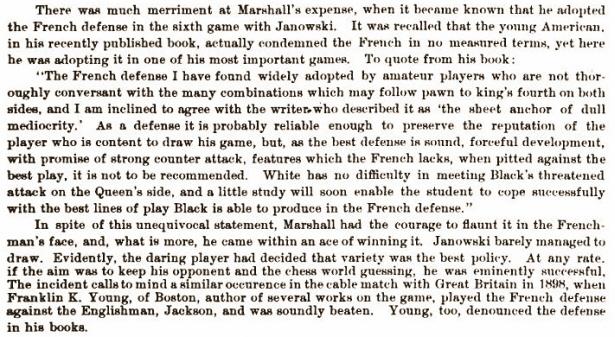 It will be recalled that Marshall played the French Defence (by transposition) in his most famous game, against Levitzky at Breslau, 1912. We add in passing that on page 27 of the February 1935 Chess Review Arnold Denker wrote regarding the conclusion of that game:

‘This is by far the finest and most artistic queen sacrifice that I have ever seen.’

‘Habituated to the giving odds in every game for the last two or three years, White labours under a temporary disadvantage in playing “even” games with a player thoroughly versed in, and daily practising, the “book” openings; he very prudently, therefore, begins in a way to throw each party on his own resources as much as possible.’

‘It is curious that nearly all the contemporary annotators condemned this move. It is, of course, one of the best methods of declining the Queen’s Gambit.’

From the book’s Introduction (page 11):

‘... the solitary Slav Defence played by Schlechter against Lasker’s Queen’s Gambit caused a buzz of astonishment throughout the chess world. One English commentator went so far as to place a note against Black’s second move: “To this weak move may be attributed the loss of the game.” He quite ignored the fact that, at one period, Black held a winning position, but the remark is interesting as indicative of the narrow outlook on the openings during the first decade of the century.’

A spot-check of annotations written in 1910 suggests that the comments in Kings of Chess about the reaction to 2...c6 are an exaggeration. Two rare cases of outright condemnation of the move are on page 130 of La Stratégie, April 1910, attributed to, respectively, Tarrasch and the New Orleans Times-Democrat: The New Orleans Times-Democrat (13 March 1910, page 9, part three) had not only the incorrect date 1885 but also a longer text whose second and third lines were inverted: