An oddity was shown in C.N. 5218: a promotional photograph, probably from the 1950s, for women’s pipe-smoking:

We found the picture on page 182 of The Ultimate Pipe Book by Richard Carleton Hacker (Beverly Hills, 1984).


C.N. 7513 showed a selection of chess-related advertisements in an article ‘Echecs et publicité’ by Jean Buchet on pages 28-30 of L’Echiquier de Paris, March-April 1949:

It was stated that the three olympiad posters (by, respectively, B. Juan Dell’Acqua, Ernesto M. Scotti and Alfredo Franzetti) were the winners of a competition set by the organizing committee, that the Norwich Union poster appeared during the Nottingham, 1936 tournament, that the photograph in the top right-hand corner was published in the Schweizer Illustrierte Zeitung of 10 February 1937 in an advertisement for the painkiller Togal, and that the light-bulb advertisement (Philips) was taken from the Algemeen Dagblad of 16 March 1948. Posters with chess connections are also of interest. In C.N. 7524 Michaël Smorowski (La Garde, France) reported that he had acquired the one below, dated 1972 in St Petersburg. It concerns a production of The Apple Cart by George Bernard Shaw:

Finally, C.N. 7533 reproduced an advertisement for Probak blades which we found on page 65 of True Detective Mysteries, December 1931:

The above article originally appeared at ChessBase.com. On the left is the former (and future) Australian chess champion John Purdy. The page has been provided courtesy of his widow, Felicity.


Information is requested on a chess problem featured in advertising by Fry’s Cocoa over a century ago, as mentioned in the correspondence section of Thomas S. Johnston’s ‘Gems, Old & New’ column on page 151 of the February 1911 Chess Amateur:

The solutions were discussed by Michael McDowell (Westcliff-on-sea, England) in C.N. 10350.

‘The front page of La’Merhav, 27 October 1957 has been brought to my attention by Moshe Roytman: The caricatures by Buchwald are of all the players in that year’s national championship, in Tel Aviv, and below it is an article about the tournament by Eliyahu Fasher. The headline reads, “Porat won Israel’s chess championship”. The advertisement is for Ariston cigarettes, and the text explains why the position – after “Black has just conquered a piece with his queen” – is stalemate.’ Peter Anderberg (Harmstorf, Germany) notes that the advertisement, placed by Felix Semmler, was in the May and June 1962 issues of Schach, on pages 160 and 192 respectively: 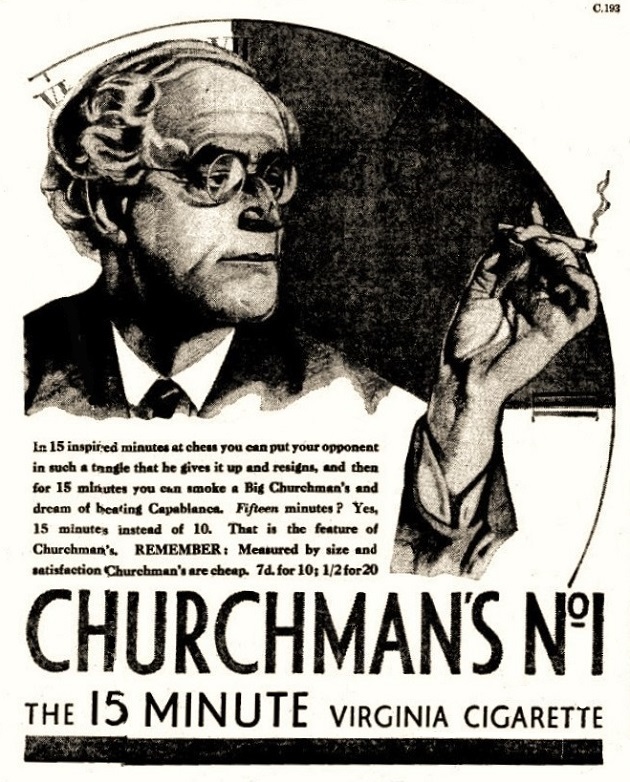