‘Many of the spectators and the managers were disappointed in Mason. He was pitted against D.G. Baird, but when he came into the hall he was laboring under excitement, and it was said that he had been imprudent enough to visit a barroom with some friends. Nevertheless he insisted on playing, but after making eight moves he had to retire, giving up his game to his opponent.’

Page 293 of the New York, 1889 tournament book published the game-score:

On page 237 of the August 1890 International Chess Magazine Steinitz described how in the New York tournament Mason ‘forfeited a game “by time” on the 8th move, and on several occasions, to speak in plain language, simply created disgraceful drunken disturbances’.

A further remark by Steinitz:

‘… Mr Mason when he descends from the heights of his obfuscated philosophy into the sober region of fact, has, so to speak, “no leg to stand upon”, which, of course, does not matter much to Mr Mason, who is notoriously rather unfamiliar with that sensation, outside of chess controversy.’

These matters were originally discussed by us in Kingpin, and on page 15 of issue 10 we turned to J.H. Blackburne and, in particular, Stephen Fry’s comment on the well-known anecdote about a simultaneous exhibition at which a glass of whisky en prise was supposedly taken en passant: ‘What I like about that story is that it is so completely unfunny.’ Asking whether such an incident had occurred, we mentioned a letter to us from Bent Larsen (Buenos Aires) reporting that at Teesside in 1972 he had met an eye-witness to the episode (alleged to have occurred in Manchester).

Joseph Henry Blackburne was certainly fond of a sip, even though page 401 of the October 1924 BCM recorded his remark ‘my favourite beverage is castor oil’. Page 494 of the June 1899 American Chess Magazine quoted from the New Orleans Times-Democrat an interview which Blackburne had given to the Licensing World, an anti-temperance journal:

‘I find that whiskey is a most useful stimulus to mental activity, especially when one is engaged in a stiff and prolonged struggle. All chess masters indulge moderately in wines or spirits. Speaking for myself, alcohol clears my brain, and I always take a glass or two when playing.’

The Times-Democrat commented: ‘Mr Blackburne, with great frankness, proceeded to dilate further upon the joys of the bowl and the misery of its deprivation.’

Concerning the dark side to Blackburne’s drinking, see the statements about him made by Steinitz, as related in Chess with Violence.

A number of webpages and other outlets specializing in (i.e. making do with) unattested ‘chess quotes’ loosely attribute to Blackburne the remark ‘chess is a kind of mental alcohol’. The observation is to be found in an interview with Blackburne which originally appeared in the Daily Chronicle and was reproduced on pages 87-88 of the 1 May 1895 issue of the Chess Player’s Chronicle. C.N. 5940 gave the full item.

Alexander Alekhine’s heavy drinking is not in doubt, and Pablo Morán’s monograph on him has a chapter entitled ‘Exhibitions Under the Influence’. There are, though, inferior writers (which is certainly not a description of Morán) who enjoy pouncing on and blowing up any great master’s adversities. See, for instance, the examples quoted at the start of our article The Games of Alekhine. A person who writes that a champion played a world title match ‘more or less in a perpetual stupor’ is capable of writing any old thing about anyone.

In the interests of maintaining a sense of proportion, C.N. 3005 quoted pages 410-413 of the August 1978 Chess Life & Review, where Max Euwe was interviewed by Pal Benko. The exchange concerns the 1935 world championship match:

‘Benko: I have heard many rumors that Alekhine was drinking heavily during the match and was behaving strangely sometimes. Can you comment?

Euwe: I don’t think he was drinking more then than he usually did. Of course he could drink as much as he wanted: at his hotel it was all free. The owner of the Carlton Hotel, where he stayed, was a member of the Euwe Committee, but it was a natural courtesy to the illustrious guest that he should not be asked to pay for his drinks. I think it helps to drink a little, but not in the long run. I regretted not having drunk at all during the second match with Alekhine. Actually, Alekhine’s walk was not steady because he did not see well but did not like to wear glasses. So many people thought he was drunk because of the way he walked.’


With regard to Morphy’s origins, C.N. 3015 asked what was known about the connection between Morphy, Murphy and beer. It was recalled that H.R. Sadeghi (Lausanne, Switzerland) had sent us a beer-mat which bore a coat-of-arms identical to that of Morphy’s family: 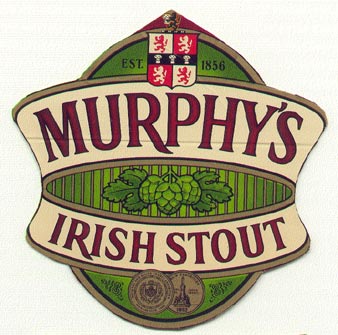 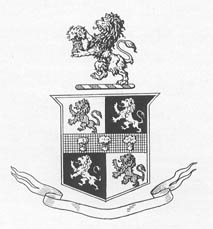 The black and white illustration comes from page 2 of the 1926 booklet Life of Paul Morphy in the Vieux Carré of New-Orleans and Abroad by Regina Morphy-Voitier, where the coat-of-arms was described as follows:

‘Morphy, alias Murphy. Quarterly argent and gules; four lions rampant interchanged, over all on a Fesse Sable three garbs or, Crest; a lion rampant holding a garb. (No Motto.)’

‘Murphy and Morphy are derivations of the same name, both being Gaelic in origin, derived from “Murchadh”, meaning “sea warrior”. The Murphy brewery website states:

“The Murphy name is in fact the most popular name in Ireland and the Murphy family ... started the brewery back in 1856 as a noble family of the Cork region.”

The Brewery’s founder was James J. Murphy. An excellent website shows the Morphy coat-of-arms to be the same as the one you have displayed. There are six separate Murphy coats-of-arms given, of which four are almost identical to the Morphy one. Thus the Morphy and Murphy family histories are shown to be inextricably linked.’


As noted on page 228 of Kings, Commoners and Knaves, almost a quarter of the entry on Bogoljubow in The Encyclopaedia of Chess by Anne Sunnucks (London, 1970) was devoted to the well-known anecdote about how the master, beer mug in hand and looking out of place, was cut from a photograph. Sunnucks’ book stated that this had occurred in Switzerland, but other secondary sources were quoted by us which gave Spain and England. We also reported that the story had appeared on page 13 of CHESS (14 September 1935):

That, in fact, is the first appearance recalled by us, and it may be added here that the following year CHESS (14 November 1936, page 85) described it as ‘the joke about Bogoljubow which Koltanowski contributed to the first number of CHESS’.

Was it really no more than a ‘joke’? That is certainly not the impression given by, for instance, Koltanowski’s rifacimento of his story (‘a ten-board simultaneous blindfold exhibition against all the members of a small chess club in Switzerland’) on page 13 of Chessnicdotes 1 (Coraopolis, 1978). Finally, a discrepancy which we are unable to explain is that pages 28-29 of the 1936 edition of Chess Pie comprised an advertisement for CHESS which featured ‘some extracts’ from ‘the magazine that has taken the chess world by storm’. These included the Bogoljubow story but not only in a different wording but even with a switch from Switzerland to Spain: 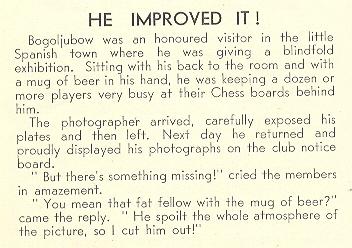 ‘Efim Bogoljubow (1899-1952) was a chubby, bombastic drunkard known for his delusional thinking that he was invincible ...’

‘Lasker is said to have won a game of “Alcoholic Chess” by sacrificing his queen in ridiculous fashion at the very outset of the game. The queen contained about a quarter litre of cognac; quaffing this seriously incapacitated his opponent in the ensuing complications – B.H. Wood.’

Page 283 of the August 1959 CHESS had an account reproduced from a chess programme on BBC radio: How far back can the story be traced? We recall an editorial account of a lunch with G. Koltanowski, one of the least reliable of all chess chroniclers, on page 255 of the November 1938 Chess Review:

In his Field column on 24 January 1880 Steinitz reproduced a paragraph from the Daily Telegraph, 7 January 1880 about an ‘extraordinary’ case involving chess and alcohol. We do not have that original publication but can show what appeared in the Leeds Times three days later, i.e. on page 7 of the 10 January 1880 edition: ‘Blackburne showed how a chessplayer could drink, poor Mason, on the other hand, how one chessplayer would drink.’

See too Alekhine and Alcohol.