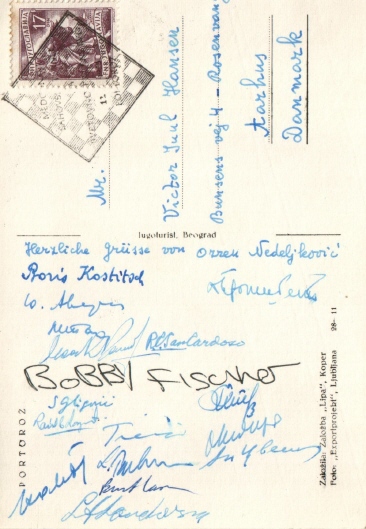 We are grateful to Charles Milton Ling (Vienna), Hassan Roger Sadeghi (Lausanne, Switzerland) and Dan Scoones (Victoria, BC, Canada) for identifying various signatures, in addition to those mentioned in C.N. 4319 (which were Cardoso, Fischer, Gligorić, Kostić, Larsen and Pachman). The collective result of our three correspondents’ submissions is the following:

Averbakh (below Kostić) and Tal (below Averbakh). To the right of Kostić: Bronstein. Below Gligorić: Sanguineti. Below the word ‘Fischer’: Petrosian.

Martin Spies (Munich, Germany) asks about the final page of the book Russians versus Fischer, which was published by Chess World Ltd., Moscow in 1994. It carried an announcement for ‘The next item in our series “Chess books”’:

The author of this book is Grandmaster Yuri Averbakh, a well-known chessplayer and writer, who has for over 30 years been at the head of the magazine Shakhmaty v SSSR, now The Chess Herald.

All these years he was a leading figure in the USSR Chess Federation. In his memoirs he speaks in a lively and engaging manner about chess activities in the former USSR, discloses many hitherto unknown facts, describes how ideology and politics influenced chess, and, vice versa, how some chessplayers exploited ideology and politics to further their own interests.’

We have no knowledge of such a book in English, but in 2003 Averbakh’s memoirs appeared in Russian under the title Shakhmaty na stsene i za kulisami.

A question prompted by Centre-Stage and Behind the Scenes by Yuri Averbakh (Alkmaar, 2011): can any reader provide a potted biography of the Soviet chess official Dmitri Postnikov? He is seated between Vladimir Rydin and Semyon Tsarapkin in the photograph below from page 39 of Life, 12 July 1954, the occasion being the USA v USSR match (C.N. 7144): 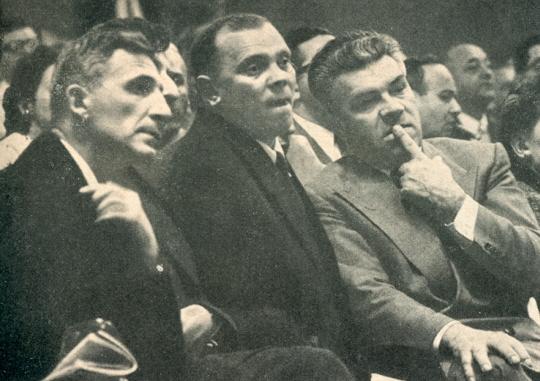 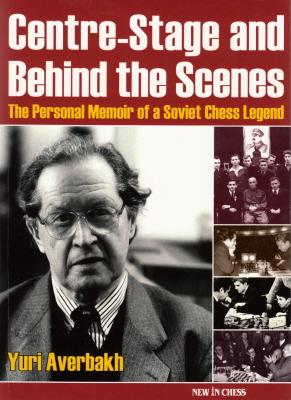 Simon Spivack (London) informs us that he has been studying Centre-Stage and Behind the Scenes by Yuri Averbakh (Alkmaar, 2011), comparing it with the original Russian, and that he is posting regular reports on his findings. 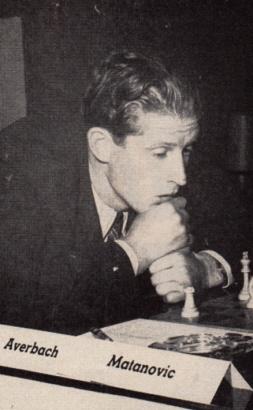 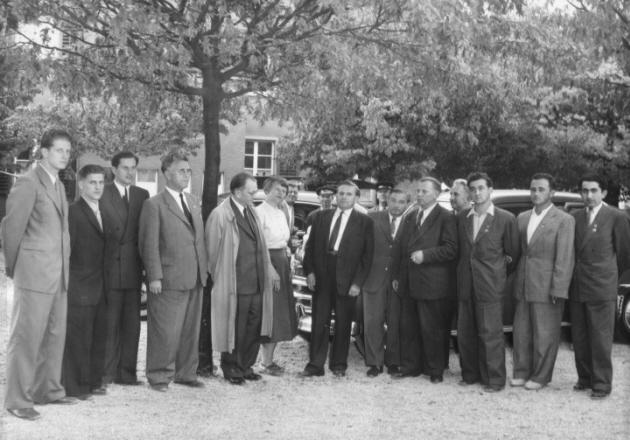 Regarding this photograph taken during the 1953 Candidates’ tournament in Neuhausen and Zurich (C.N. 3956), we are informed by Grzegorz Siwek (Warsaw) that the figure on Kotov’s left is D. Postnikov.

Daniel Naroditsky (Foster City, CA, USA) offers some examples of errors in Chess School 2 The Manual of Chess Combinations by Sergey Ivashchenko (Moscow, 2002), including the following: 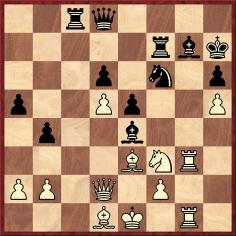 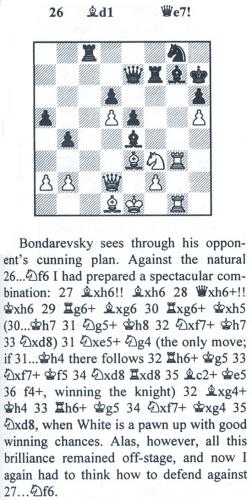 In Ivashchenko’s book the game is misdated 1961 (it was played in the USSR Championship in Moscow in 1951), and it is not specified that the position did not occur in the actual game.’ The above photograph of Yuri Averbakh, Jacqueline Piatigorsky and Pal Benko has been forwarded by John Donaldson (Berkeley, CA, USA).

‘On pages 167-170 of 7 Ways to Smash the Sicilian (London, 2009) Yuri Lapshun and Nick Conticello analyse a game cited as “Y. Gusev-Y. Averbakh, Moscow, 1951” and marvel that one of the stalwarts of the Soviet chess establishment could be so comprehensively beaten by a relatively unknown master. The source was stated to be Rolf Schwarz’s 1966 work Die Sizilianische Verteidigung.

Gusev’s opponent was not Yuri Averbakh but a minor Soviet master named E. Auerbach. The game was played not in Moscow in 1951 but in the championship of the Molniya Sporting Society in 1946. It was published on page 300 of Shakhmaty v SSSR 10/1951: 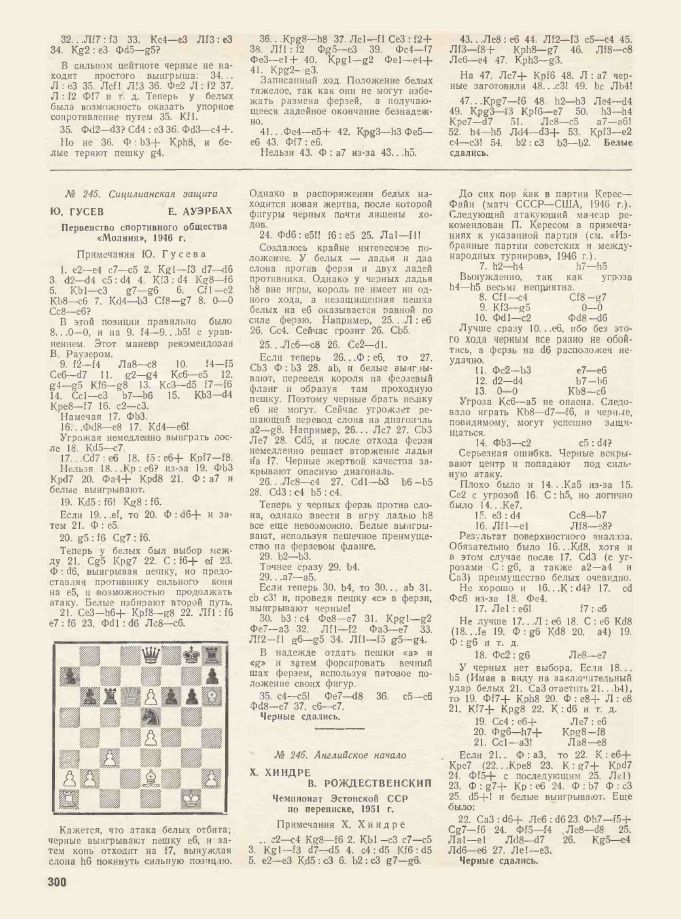 I have not been able to trace the venue or any other games from the event.’

We note many sources which gave incorrectly Black’s identity and the game’s date. An exception is Queen Sacrifice by I. Neishtadt (Oxford, 1991), which has a footnote on page 210 stating that Black should not be confused with Yuri Averbakh; the occasion was given as ‘Moscow, 1946’. On page 212 Neishtadt commented:

‘Virtually the most impressive of all queen sacrifices.’


Uncertainty over the rules 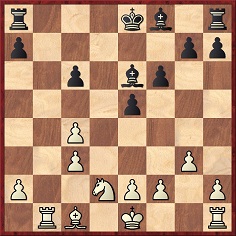 C.N. 795 mentioned the castling incident which occurred in Averbakh v Purdy, Adelaide, 1960, as reported on page 110 of Wonders and Curiosities of Chess by Irving Chernev (New York, 1974). In The Facts about Larry Evans we commented:

In July 2000 [Chess Life] Evans presented a diagram from the famous game between Averbakh (Evans writes ‘Averbach’) and Purdy, played in 1960 in Australia (‘Austalia’), which had been published in his book Chess Catechism. In that volume (page 39) Evans had given an inaccurate diagram, omitting a white pawn on g3, so has his level of accuracy changed in the three decades since the book appeared? Yes, indeed. In his July 2000 column the white pawn on g3 is still missing, but now there is a second absconder, from the black side: a pawn at a7.

Chernev’s above-mentioned account quoted Purdy’s words (albeit without specifying their provenance) and is the most detailed and accurate version found in a secondary source. Later writers took the matter backwards, not forwards. 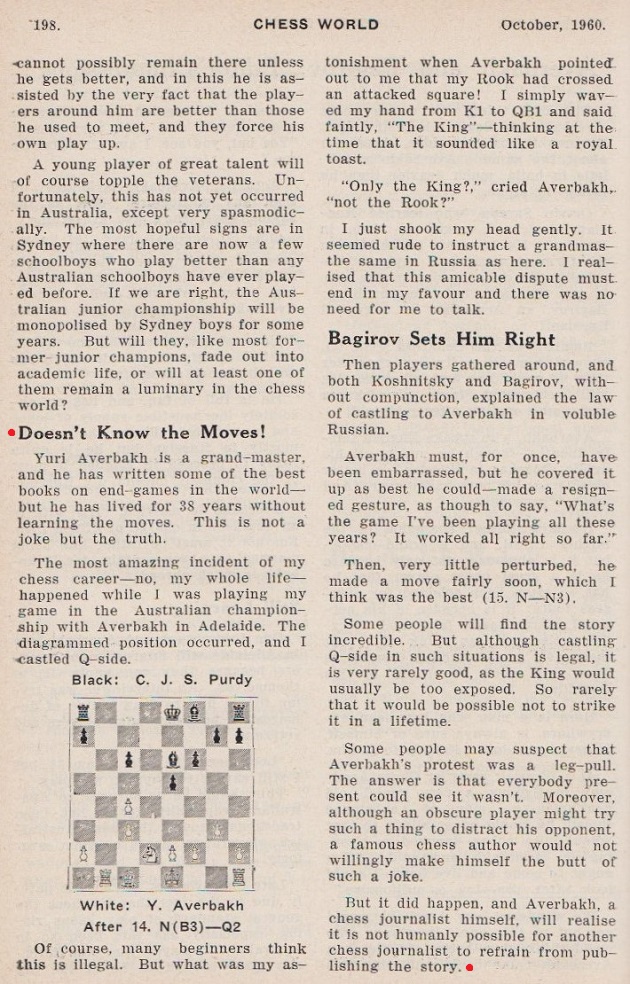 The episode was referred to again by Purdy on page 124 of the July-August 1967 Chess World (which included an impossible date, Sunday, 17 January, in connection with Averbakh’s further stay in Australia): 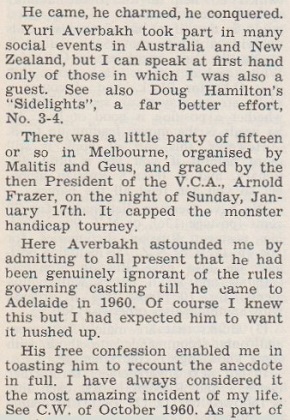 As regards Averbakh’s side of the story, however, the final paragraph of a review (by ‘B.C.’ – Bernard Cafferty) of his book V poiskakh istiny (Moscow, 1967) on page 2 of CHESS, October 1967 deserves attention: 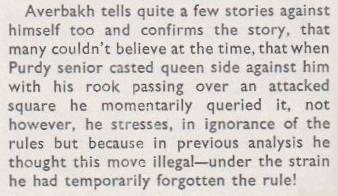 Towards the end of the Adelaide tournament Averbakh spoke highly of Purdy in an interview with W.J. Geus (Chess World, October 1960, page 211):

‘One of the oldest competitors, but put all his strength into his games. His qualities as a fighter are wonderful. Had no luck in this tournament. His technical positional knowledge is first class, and one could say: “Understands chess.”’