Breyer and the Last Throes


The Hungarian master Gyula Breyer (1893-1921) is regularly quoted as saying/writing that after 1 e4 White’s game is in the last throes, and C.N. 9 asked if this was apocryphal.

‘On page 141 Breyer is quoted as saying that after 1 P-K4 “White’s game is in its last throes”. But this is scarcely hyper-modern, for H.E. Atkins made a similar joking remark to the present reviewer if his memory is not at fault, 25 years ago.’

‘M.V. Anderson. We have looked further into the Breyer dictum. Réti, in his Modern Ideas in Chess (English translation, London, 1923), makes a long quotation from, he says, a booklet by Dr Tartakower: “and above all (as Breyer preaches in one of his published treatises), ‘After the first move 1 P-K4 White’s game is in the last throes’ ...” We wrote to Dr Tartakower and asked for particulars of the “published treatise”. In a typically courteous reply he says: “I am astonished that Réti quotes me in speaking of Breyer, for it is precisely from Réti himself that I learnt all about his friend Breyer ... I do not know whether Breyer did publish a book ... Breyer’s (or perhaps Réti’s own) dictum was ‘the initial position is a very difficult one to judge’.”

Any conclusions from this we leave to you.’

As also pointed out in C.N. 1549, it is curious that when M.V. Anderson referred to this enquiry on page 8 of CHESS of 24 October 1959, he twice mistakenly wrote ‘Bogolyubov’ instead of Tartakower, concluding:

‘The truth may be traceable from another remark in Réti’s book; on page 122, there is a diagram of a chess board with the pieces in position for the commencement of a game, entitled, “A complicated position”.

Réti says there that Breyer “in an article some years ago” (In the original German editions of 1922 he has “vor einigen Jahren in ungarischer Sprache”) i.e., some years prior to 1922 Breyer wrote an article in a Hungarian magazine “to prove 1 P-Q4 better than 1 P-K4”.

But there were plenty of players as far back as Staunton’s time that had the same view.

It can be concluded that Réti probably invented a dramatic statement from a mythical “treatise” just to dub it absurd, and it now goes round the world as the solemn belief of a man who probably never heard of it. Breyer died in 1921 before the first edition of Réti’s book.’

In the 7 November 1959 CHESS (page 42) A. Eccles pointed out that Réti had referred to Tartakower and not Bogoljubow, and said that Réti’s concluding quotation ‘Credo quia absurdum’ does not mean ‘which is absurd’ but ‘I believe this because it is impossible’.

Strangely, nobody seems to have turned to Tartakower’s ‘booklet’, Am Baum der Schacherkenntnis (Berlin, 1921), to check what he wrote. Page 16 has the passage quoted by Réti (and quoted with a few small changes). The Latin phrase is there; A. Eccles was clearly misled by the English edition’s faulty use of quotation marks into thinking that it was Réti rather than Tartakower who had picked the expression.

Below is an English translation of Tartakower‘s final paragraph:

‘The apparently unmasked idols of the old school are overturned; the favourite openings appear to be refuted: the Four Knights’ Game, childish; the Ruy López, ineffectual; the Queen’s Gambit, compromising; and in any case (thus preaches the Grand Cophta Breyer in a treatise published by him) White would be in the last throes already after the first move! Credo, quia absurdum!’

In his reference to Breyer, Tartakower used the word Abhandlung, which may mean ‘treatise’ either in the sense of article or book.

‘As far as I remember, it was Mieses who made the piquant remark that 1 e4 is a mistake which leads to the loss of the game.’

It is certainly surprising to see Mieses’ name mentioned. Moreover, can it be a coincidence that Barász’s remark appeared in annotations to a game from a tournament (Budapest, 1911) in which both Barász and Breyer were participants?

‘It was left for the brilliant young Breyer to pronounce that the first move was a disadvantage, presumably on the ground that White has to commit himself.’

From page 88 of Chess Beginner to Expert by Larry Evans (Wellesley Hills, 1967):

‘Breyer once began annotating a game by: “1 P-K4?” His terse comment, “White’s game is in its last throes!”’

‘Breyer once began annotating a game by giving 1 P-K4 a question mark, accompanied by the comment that “White’s game is in its last throes!”’

See too page 26 of the 2011 edition of New Ideas in Chess, where Breyer’s supposed comment was called ‘infuriating’. 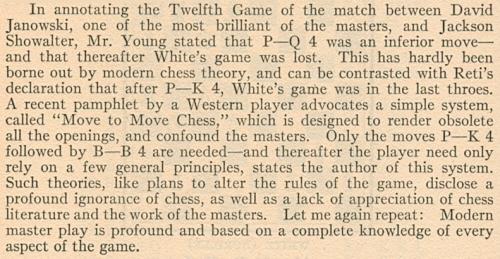 ‘... the Hungarian Breyer claimed that in the opening position (with all the pieces and pawns still unmoved) White’s game was in the last throes.’

‘The Réti standpoint has been well caricatured in the comment attributed to his friend Breyer:

‘Some enthusiastic young supporters of Nimzowitsch’s theory questioned the wisdom of starting the game with the customary double step of the king’s pawn even when playing White. One of them, the highly gifted Hungarian Julius Breyer, coined a chess epigram when he said that with the immediate advance of his king’s pawn White took the first step toward digging his own grave.’


An enquiry from Philipp Kaufmann (Zurich):

‘I am looking for a game commented upon by Samuel Beckett which began something like “1 e4 and now the difficulties begin for White”.’

The game in question was on pages 243-245 of Beckett’s 1938 novel Murphy, the exact wording of the note to White’s first move being: ‘The primary cause of all White’s subsequent difficulties’.

A descriptive passage about the chess encounters between Murphy and Endon appeared on pages 187-188 of the book.


Wanted: information about the origins of the Breyer Defence in the Ruy López, as featured in the Fischer v Spassky matches. When did Breyer play it or write about the line? Also, when was his name first attached to it?

Iván Bottlik (Budapest) draws attention to his account of this matter on page 221 of volume three of Magyar Sakktörténet (Budapest, 1989):

‘Here is the situation regarding the puzzle of the Breyer Defence in the Ruy López. This term has been adopted by chess literature throughout the world, although no-one has so far managed to discover a game played by Breyer with 9...Nb8. There is no trace of it even in his writings. The term has become so well established that Vienna chess players told Gideon Barcza in 1955 that this move had been recommended by Breyer. (Breyer visited Vienna regularly and also played in tournaments there in 1920 and 1921.)

A 1955 text by a Viennese contemporary of Breyer, the International Master and renowned theoretician Hans Müller, contains decisive information and confirms that this variation did indeed originate with Breyer. In Schach Echo, 1955, page 247, he writes as follows in explaining a game with the move 9...Nb8: “This strange, though well thought out, retreat was first recommended by the Hungarian master G. Breyer in one of his essays as an improvement on the classical Chigorin Defence.”

In this explanation, Müller quotes from memory several of Breyer’s observations. There is therefore no doubt that at some point he saw the essay. Unfortunately, so far neither we nor any foreign researchers into Breyer’s life and work have been able to find any further trace.

Nevertheless, the term “Breyer Defence” can be justified by Müller’s text.’

Mr Bottlik’s letter to us adds:

‘It is several years since I wrote the above, but neither I nor others have been able to make any progress whatsoever. Concerning the “essay” mentioned by Müller, it should be noted that either it existed in manuscript form and was lost (like the manuscript of Breyer’s book on the ending rook and bishop versus rook) or else it was published somewhere and remains to be discovered.’


Gábor Gyuricza (Budapest) has sent us a copy of a bilingual booklet A budapesti sakkozás rövid története / A Short History of Chess in Budapest by László Jakobetz (Budapest, 2010). A particularly interesting chapter, contributed by our correspondent and by Iván Bottlik, is entitled ‘The disputed origin of the Budapest Defense’ (pages 37-48). With the co-authors’ permission we reproduce this photograph: We appeal for good-quality photographs of Gyula Breyer. Tartakower’s Die Hypermoderne Schachpartie (Vienna, 1924) – see page 320 – did no better than this: Ross Jackson (Raumati South, New Zealand) reports that he recently acquired a number of photographs from a Hungarian dealer: On the first photograph (a postcard signed by Breyer) we have indicated Breyer and Réti. A full caption appeared in volume three of Magyar Sakktörténet by G. Barcza and A. Földeák and in Kis Magyar Sakktörténet by I. Bottlik (published in 1989 and 2004 respectively). Assistance with identifying individuals in the final two pictures will be appreciated. In the last one, Breyer appears to be standing third from the left, Maróczy being seated in the centre.


The superficial treatment of the ‘last throes’ topic in Gyula Breyer. The Chess Revolutionary by Jimmy Adams (Alkmaar, 2017) was discussed in C.N. 10563. See too C.N. 10661, which observed that much of Mr Adams’ response, at the Kingpin website, to our criticism of his book reads like a leg-pull. On the central issue we commented in C.N. 10661:

In recent decades, historical chess biographies have seen a major advance in scholarship, with far greater recognition of the need for precise sources. The world’s leading publisher in the field is McFarland & Company, Inc., and any list of its best biographical works is likely to include the following:

Question: How many of the above authors treat sources in a manner even remotely similar to Jimmy Adams’ method?

Jimmy Adams has an assured place on any list of chess writers who have discredited themselves by defending the indefensible.


From page 328 of the Australasian Chess Review, December 1936, at the start of an article by Lajos Steiner entitled ‘A Chat about the French Defence’: