A photograph of Jacob Bronowski opening the Hastings, 1961-62 event appeared on page 119 of the mid-January 1962 issue of CHESS:

The next page reported:

‘Dr Bronowski, opening the congress, disclosed that he had played chess all his life “with pleasure and passion” and considered himself fortunate to have lived through the most tremendous half century in the development of the game. It was just 50 years since the public had suddenly become excited about chess: it began with the great San Sebastián tournament of 1911,b when Capablanca first sprung to fame.

At the age of 14 Dr Bronowski learned chess and was taken by his father to a simultaneous exhibition by the then boy prodigy Reshevsky. When he entered the room, he was taken for Reshevsky and got a round of undeserved applause. In 1945 he had played for the Civil Service against a scratch team and found himself faced by a young boy in knickerbockers who had signed his score-sheet “Jonathan Penrose”.’


The quote below, from an obituary of Sir Maurice Kendall, comes from Morgan Daniels (London):

‘Life at St John’s was in striking contrast to that in Derby, and Maurice’s naturally gregarious nature brought him several circles of friends apart from the group reading Mathematics at St John’s: he played cricket for his college (and indeed was still a useful medium-paced bowler 25 years later); and he might have got a half-blue at chess had the company been less select – C.H.O’D. Alexander, later twice British champion, was one, and Jacob Bronowski another. Typically, Maurice enjoyed playing chess blindfold, and Bronowski and he played “negative chess”, where the previous moves had to be deduced from a set position.’

Paul Timson (Whalley, England) notes that Bronowski represented Cambridge University on board three against Oxford University in 1931, losing to E.S. Bensinger. See, for instance, page 357 of A Century of British Chess by Philip W. Sergeant (London, 1934). In the report on pages 157-158 of the April 1931 BCM the encounter was described as follows:

‘The third-board game raised Oxford’s hopes, Bensinger gaining a meritorious victory over Bronowski, winning a rook after having, apparently at least, had a ticklish position when the short middlegame commenced.’

‘The Yorkshire individual championship has been won by J. Bronowski, of Hull. ... Dr Bronowski is assistant lecturer in mathematics at the University College, Hull, and is also an M.A., Ph.D. of Cambridge. He is 28 years of age. He has lived in Poland, Germany, France and Spain, and had been in Hull for one year when he won the club championship, which he has now followed by winning the county championship as well.’

A game from the London Commercial League was given (with notes by Bronowski) on pages 119-120 of the April 1963 BCM:

Below is a list of problems by Bronowski that we have noted in the BCM:

The first of these:


Michael McDowell (Westcliff-on-sea, England) notes that a few more problems by Bronowski can be found at the Chess Problem Database Server website by entering in the search box the following reference: a = 'bronowski'

Paul Buswell (Hastings, England) mentions that a Bronowski Trophy is still played for in London.

The strategy of the mobile horde depends on manoeuvre, on rapid communication, and on practised tactical moves which can be strung together into different sequences of surprise. The remnants of that remain in the war games that are still played and that come from Asia, such as chess and polo. War strategy is always regarded by those who win as a kind of game.’


Pages 182-183 of The Fry Chronicles by Stephen Fry (London, 2010) relate a conversation with Alistair Cooke during a dinner at Trinity Hall, Cambridge in 1981. Cooke ...


C.N. 177 criticized a Bronowski tribute article by Harry Golombek on pages 441-443 of the December 1974 BCM on the grounds that Golombek wrote at length about himself. He did the same in an article also supposedly about Bronowski, ‘Master and man’, on page 13 of The Times, 5 October 1974.


The problem below was published by C.H.O’D. Alexander in his chess column on page 40 of the Sunday Times magazine, 29 May 1966 under the heading ‘Specially contributed by Dr J. Bronowski (La Jolla, California)’:

No report on the contents of the envelope has yet been found.


The game North v Bronowski, Yorkshire championship, 1936 was published by K.J. O’Connell on pages 298-299 of the July 1977 BCM, quoting from the Yorkshire Chess Association Bulletin:

A number of compositions have been listed on which Bronowski collaborated with Norman Martin Gibbins, and Steven B. Dowd (Birmingham, AL, USA) points out a website offering information about Gibbins.

We add that a brief illustration of Bronowski’s play was published on page 15 of volume two of Learn Chess: A New Way for All by C.H.O’D. Alexander and T.J. Beach (Oxford, 1963): ‘The congress was opened, after the Mayor (Alderman G. [sic – C.] Barfoot, JP) had welcomed the competitors, by a chessplayer of no mean skill in the person of Dr J. Bronowski, who discarded most of the usual platitudes in favour of a really amusing account of his own chess career, which proceeded rather on the lines of the applicant for the Indian Civil Service who had “failed entrance examination Allahabad University 1922”. The good doctor had managed to lose to almost every grandmaster in the room and quite a few more, some of them when they were of very tender years, such as Sammy Reshevsky when a boy prodigy (for whom he was momentarily mistaken at a display and given a big round of applause), and Johnny Penrose way back in 1945. It was all excellent fun, and when someone accidentally “crowned” chairman Percy Morren [the President of the Hastings Chess Club] with a demonstration board the large crowd’s day was really complete.’ 
Gerard Killoran (Ilkley, England) points out a passage about Jacob Bronowski on page 34 of Snapshots. Encounters With Twentieth-Century Legends by Herbert Kretzmer (London, 2014): 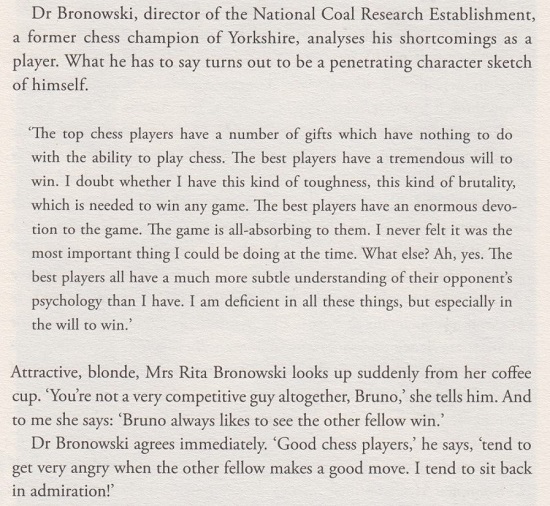 
Reference has been made (see above) to Harry Golombek’s self-centred ‘tribute articles’ on page 13 of the Times, 5 October 1974 and pages 441-443 of the December 1974 BCM. An episode related in both publications dates from the late 1920s:

‘... on holiday at a seaside resort on the southern coast I had a number of conversations with a worried looking gentleman in my boarding house while the rain was falling. This was Bronowski’s father, and the reason why he was worried was that he was full of forebodings about his son’s tendency to dissipate his undoubted gifts on what seemed to him mere side-issues. He was writing poetry and, as for chess, he was giving too much time to chess problems. “A waste of time”, I commented in the full certainty of my 17 years. “Yes”, said Bronowski père, “that’s what I’m always telling him.”’ (Times)

‘... he asked for my advice about his son. He was at Cambridge University and, according to the father, dissipating his undoubted talents in all sorts of unrewarding side-issues. He was even writing poetry and as for chess, he had recently taken up problem composing instead of the more solid pursuit of actually playing chess. What, he asked, did I think of chess problems. “A waste of time”, I replied. Before there are howls of protest, let me add that I have learnt better now. I consider problems just as much, or as little, waste of time as playing chess, going in for politics or religion, practising the law or train-spotting, negotiating to enter or leave the EEC or just simply, like Candide, cultivating one’s garden. Anyway, my reply appealed to Bronowski père, who said, “That’s what I’m always telling him.”’ (BCM)


When Jacob Bronowski was the guest on the BBC Radio 4 programme Desert Island Discs (an episode first broadcast on 5 January 1974), he chose as his luxury item an antique chess set and, as his book, an unnamed volume on the 1972 Spassky v Fischer match. The relevant sequence begins at about 26’00” in the archived version on the BBC website.

Olimpiu G. Urcan (Singapore) has sent us a 1973 photograph of Dr Bronowski which is shown here courtesy of Timelapse Library Ltd/Getty Images: