Agatha Christie’s 1927 book The Big Four included ‘A Chess Problem’, which mentioned Lasker, Capablanca and Rubinstein. A murder mystery solved by Hercule Poirot, it has often been anthologized as a short story, two instances in the chess world being pages 184-195 of Chess in Literature by Marcello Trutti (New York, 1974) and pages 222-233 of Sinister Gambits by Richard Peyton (London, 1991).

Did Agatha Christie refer to chess anywhere else in her writings?


When The Big Four was brought out by Planet Three Publishing Network Ltd. (no date given) the front cover had a chess illustration: Below is the remark about ‘even a Russian’ (which was addressed to Hercule Poirot) in ‘A Chess Problem’, as published in the edition of Agatha Christie’s book The Big Four referred to in C.N. 4105: ‘[“A Chess Problem”] reveals its author’s knowledge of the game, for she played from her childhood, and to the end of her life continued to enjoy games with her husband, Sir Max Mallowan, as relaxation after a day’s hard plotting.’

Peyton specified no source for this information.


In one of the best-known novels by Agatha Christie, Ten Little Niggers (London, 1939) – later retitled And Then There Were None and Ten Little Indians – the marooned characters are slow to realize that the name ‘U.N. Owen’ signifies ‘Unknown’. 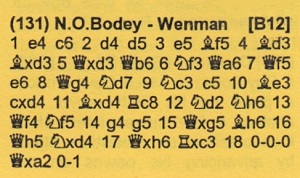 As so often, Gillam mysteriously omitted to specify the source of the game, and he gave no sign of realizing that the name ‘N.O. Bodey’ was a whimsical pseudonym.

Ten players participated in the Liverpool tournament, and the pseudonym was in quotation marks on page 165 of the May 1923 BCM:

The quotation marks were retained by Jeremy Gaige on page 592 of volume four of Chess Tournament Crosstables (Philadelphia, 1974), which duly gave a reference to the above BCM table. Neither the quotation marks nor the source reference appeared on page 56 of Chess Results, 1921-1930 by Gino Di Felice (Jefferson, 2006).

Of the contemporary newspaper reports that we have seen, none revealed the identity of ‘N.O. Bodey’. The Scotsman of 2 April 1923, page 9, reported that the Major Tournament included ‘a Liverpool amateur who prefers to remain anonymous’. Page 6 of the Daily Telegraph, 6 April 1923 referred to ‘the gentleman who prefers to play under the euphonious pseudonym of N.O. Bodey’.


There is a reference to the Wallace murder case in Evil Under the Sun by Agatha Christie (first published in 1941). The passage, at the start of chapter five part five, is shown below from page 71 of a Christie anthology published by Hamlyn, London in 1970. The two police officers and Hercule Poirot have just questioned Kenneth Marshall, the murder victim’s husband:

‘And Wallace, a quiet man whom the jury insisted did kill his wife, though the sentence was quashed on appeal.’

‘And it is in this respect that Agatha Christie repeats her Cards on the Table triumph and, as it were, plays and beats Steinitz with a single row of pawns.’ 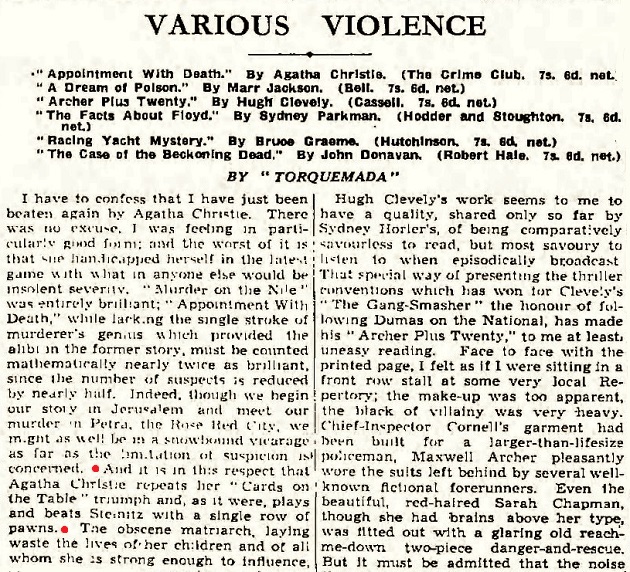 That review by ‘Torquemada’ of the Agatha Christie novel Appointment with Death comes from page 7 of the Observer, 1 May 1938.


Books by which chess author appear in both Endeavour (Shaun Evans) and Poirot (David Suchet)?

The answer is below. (The episodes of these ITV programmes were entitled, respectively, ‘Game’ and ‘The Big Four’.) Near the beginning of the Endeavour episode, the eponymous detective briefly handled a copy of Chess Lessons for Beginners: ‘The Big Four’ has a short scene, also early on, in which Hercule Poirot was researching the Ruy López in a large-format book with a fictitious cover and title (The 50 Greatest Chess Problems – author’s name indistinct). The content fleetingly shown is identifiable as being from Cunnington’s Chess Traps and Stratagems. Below are the pages from which fragments of text and diagrams can be seen, just about, in ‘The Big Four’, although the lay-out was altered: