The American’s move 40 Kxe1 is criticized as inferior to 40 Rxe1, which, it is claimed, would have drawn. Then Beheim comments:

‘The consequences of a tiny slip like this may have affected the whole of modern chess history. For Fine tied with Keres in this great AVRO tournament, but the application of the tie-breaking system gave Keres the official right to challenge for the world championship.

Had Fine been the winner, it is quite possible that his American compatriots would have found the backing for a title match with Alekhine – and Fine would have had excellent chances against an Alekhine who was, in 1938, well past his peak. It is scarcely exaggerating to suggest that Reuben Fine came within one move of becoming the first world champion from the United States.

What actually happened was that Fine, disappointed by not winning the AVRO tournament and his inability to dislodge Reshevsky from the United States championship, gradually withdrew from international chess.’

We have lost count of the fallacies in this fanciful speculation about the consequences of a game played as early as round seven out of 14. Can readers quote better examples of decisive positions in chess history? 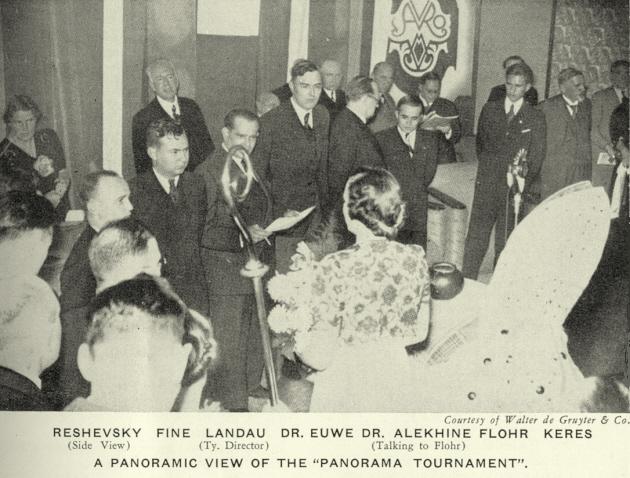 In his book Chess with the Masters Martin Beheim criticized Fine’s decision to capture the knight with the king rather than the rook. He claimed not only that 40 Rxe1 would have drawn but that ‘the consequences of a tiny slip like this may have affected the whole of modern chess history’. C.N. 1958 disputed Beheim’s words, not least because the game was played as early as round seven out of 14.

However, Ronnie Aker (Paris) now points out that Beheim seems to have been repeating Keres’ own view, as given on, for example, page 129 of the Batsford edition Paul Keres: The Road to the Top (London, 1996):

‘The present game was played in the last round of the first cycle and had a very important bearing on the further course of the tournament. Fine had started brilliantly and with 5½ points out of 6 games he had a substantial lead over his nearest rivals. In the event of his winning the present game, nobody could have threatened to overhaul him, bearing in mind the short duration of the tournament.’

‘The psychological impact of this first defeat was probably very significant for Fine, given his fantastic start. In chess, as in many other sports, the mental “will to win” aspect can be even more important than a simple mathematical accounting of points accumulated versus rounds remaining.’

We thank Mr Aker for an interesting contribution. It should, though, be observed that the annotations of neither Keres nor Fine (the latter in The World’s Great Chess Games) claimed a draw for White after 40 Rxe1. Beheim, for his part, was relying on the following analysis by Bronstein in the Soviet Chess Chronicle (no date given):

In the second of these lines, both Keres and Fine gave 43…Bd6 as leading to a win (with the continuation 44 Rxf5+ Kg6 45 Rb5 Bxh2 46 Kxc3 Be5+ 47 Kd3 Kf5 48 Ke3 g5). So is it indeed true that 40 Rxe1 would still have lost and that, consequently, Beheim’s assertions about the position’s historical importance are in any case invalid on analytical grounds?

‘The turning point for Fine at AVRO was probably the adjournment session of his game with Reshevsky on 21 November (see the article “Time Trouble!” by Prins, on pages 399-400 of the December 1950 BCM), followed by his loss to Euwe the next day. He had drawn easily with Botvinnik in round 8, adjourned with Reshevsky in an inferior, but apparently tenable, position in round 9 and drawn with Capablanca in the next.’