What do the following games have in common?

The answer is that all of them were annotated in depth by Capablanca in the ‘Illustrative Games’ section of Chess Fundamentals and all of them have been chopped out of the ‘completely revised & updated’ edition by Nick de Firmian (Random House, New York, 2006). Their removal makes space for some newer games, including five and a half pages devoted to N. de Firmian v P. Youngworth, Lone Pine, 1980.

We hope that anyone who chooses to sell the book will at least warn prospective purchasers about what Mr de Firmian has done, the above being, alas, just one example.


We now give further examples.

In his Introduction (page vii) de Firmian explains the philosophy behind the butchery:

‘New concepts, new strategies, and even new chess notation make for a need to revise this classic for the 21st century.’

This disregards the fact that an algebraic edition already exists, published by Cadogan Chess in 1994. Since it presented the integral text in a mere 121 pages, why would any other algebraic edition, even if needed, have to save space by omitting reams of Capablanca’s material?

‘I have endeavored to replicate the care that went in to the 1921 version, with the intention to make a work with which Capablanca would be happy.’

He has done nothing of the kind, and Capablanca would obviously be devastated. In the 1934 Preface to the US version he wrote:

‘... Chess Fundamentals is as good now as it was 13 years ago. It will be as good a hundred years from now; as long in fact as the laws and rules of the game remain what they are at present. The reader may therefore go over the contents of the book with the assurance that there is in it everything he needs, and that there is nothing to be added and nothing to be changed. Chess Fundamentals was the one standard work of its kind 13 years ago and the author firmly believes that it is the one standard work of its kind now.’

De Firmian’s Introduction also summarizes some of the changes made (e.g. ‘Chapter 5, Openings, is completely new’) and says bizarrely about the book as a whole:

‘The chess historian should have little trouble deciphering which material is original if he or she is observant.’

This ‘he or she’ stuff, incidentally, is de Firmian’s preferred usage, and he foists it on Capablanca throughout. The first sentence in the first chapter of the first part of the original Chess Fundamentals stated: ‘The first thing a student should do, is to familiarise himself with the power of the pieces.’ De Firmian puts instead: ‘The first thing a student should do is to familiarize himself or herself with the power of the pieces.’ Correcting or amending Capablanca on matters large and small is such a thrill that de Firmian becomes unstoppable. Three times on pages 103-115 he alters ‘Kupchik’ to ‘Kupchick’, even though Capablanca’s spelling of the name was right. It is unfortunate that nobody was engaged by Random House to correct de Firmian. For instance, his ‘completely new’ 17-page chapter on the openings includes, on page 79, references to the ‘Four Knight’s Game’ and the ‘Two Knight’s Defense’. At no stage does de Firmian evince any knowledge of Capablanca’s career or games, and on page 14 he even goes wrong with a famous pawn ending presented by Capablanca. (See pages 319-320 of Kings, Commoners and Knaves and C.N. 3830.)

Beyond issues of arrogance and ignorance, the remaining question is whether de Firmian’s book attempts to deceive readers over the nature and extent of the alterations made. His Introduction (pages vii-viii) has a 17-line section entitled ‘What has changed from the original version’ in which he writes regarding the ‘illustrated [sic] games’ section:

‘Here we start with five of Capablanca’s original games (the most instructive ones in my opinion). After this, there are nine games from his time up to the present.’

How many readers would imagine from such a wording that Chess Fundamentals originally contained 14 illustrative games annotated by Capablanca and that de Firmian has eradicated all but five of them?

Publishers know that indolent and/or time-pressed vendors often make do with quoting from the back-cover blurb. As shown above, the Random House book states:

The presence of Nimzowitsch’s name is inexplicable, but the damning, deceitful word is ‘supplements’. De Firmian has not supplemented Chess Fundamentals. He has destroyed it.

In his 2006 edition of Chess Fundamentals Nick de Firmian’s changes included putting ‘he or she’ where Capablanca had written ‘he’. If, heaven forfend, de Firmian were let loose on Alekhine’s book on Nottingham, 1936, he would come to this note, on page 56 of the original, concerning the third-round game between Alekhine and Tylor:

Or, in the ‘style’ imposed by de Firmian:


In 2006 there was an edition of Chess Fundamentals revised by Nick de Firmian which purported to improve on the text by giving the reader less Capablanca and more de Firmian.

Now, Emereo Publishing has brought out ‘The original classic edition’ of Capablanca’s work: 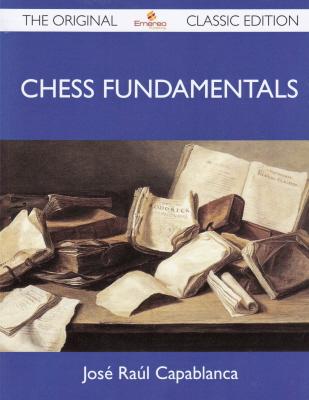 All the diagrams have been dropped, and the book is therefore unusable. For instance: 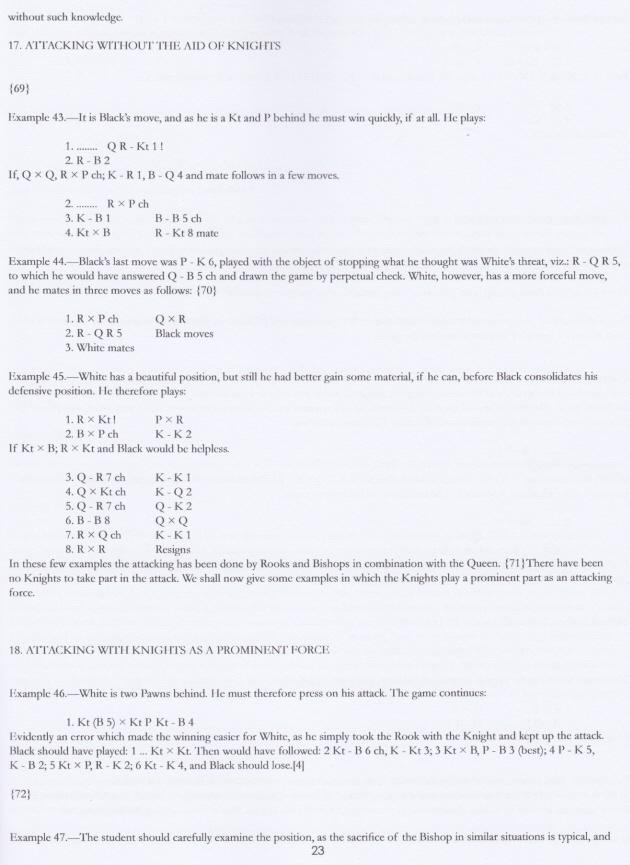