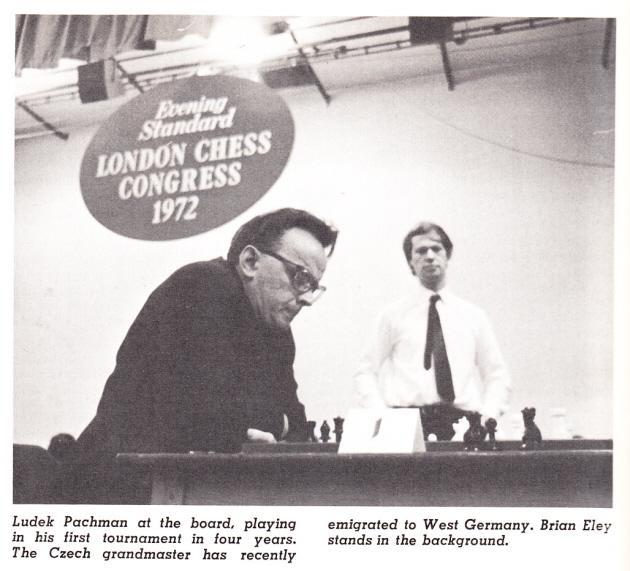 
In a detailed contribution on the Evening Standard tournament, Leonard Barden (London) informed us in C.N. 7668:

‘We wanted him [Pachman] to have an interesting first-round opponent, so Stewart Reuben adjusted the draw slightly so that Pachman was paired with Jonathan Speelman, then aged 16. Pachman won. Of course, he was not technically or psychologically prepared for a weekend tournament with three rounds on the Saturday, so it was no great surprise that the next day Brian Eley caught him in the “DERLD” [the Delayed Exchange Ruy López Deferred], which was then a much analysed opening in England.’


C.N. 7663 gave a photograph taken during Brian Eley’s well-known victory over Ludĕk Pachman at the Evening Standard London Chess Congress in 1972. The newspaper had a half-page tournament report on page 6 of its 16 December 1972 edition: 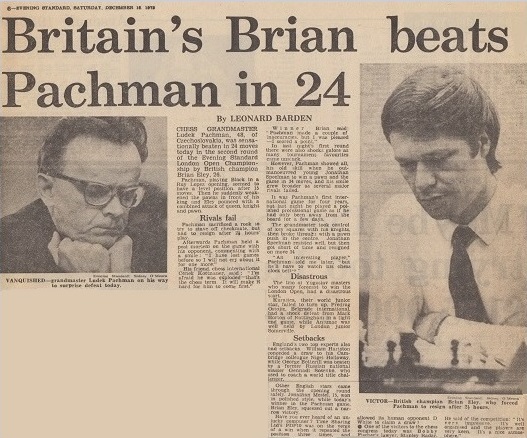 
From page 318 of the September 1972 BCM, following Eley’s victory in the British Championship: 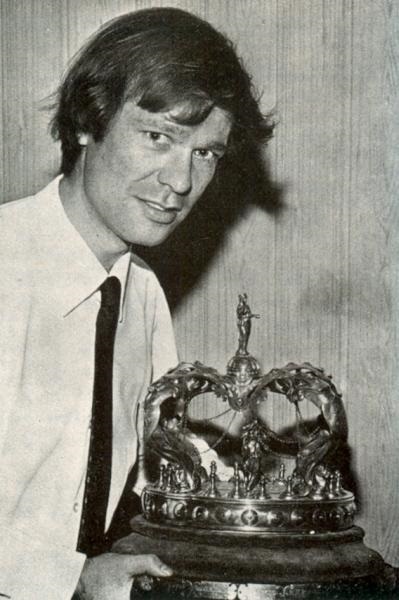 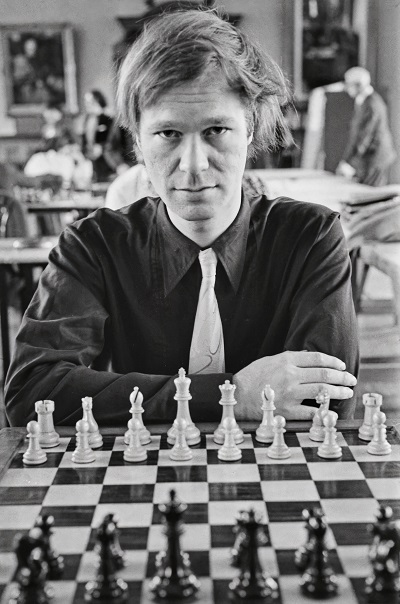 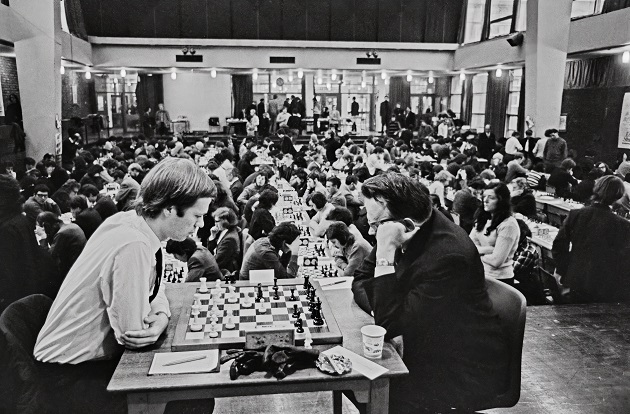 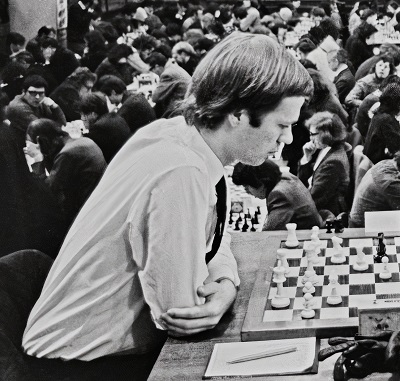 
We had no correspondence with Eley apart from a few book orders. For example:

The entry for Brian Eley in Jeremy Gaige’s Chess Personalia (Jefferson, 1987) had only ‘c1946’ with regard to his birth. The unpublished 1994 edition stated that he was born on 6 July 1946 in Don Valley, England, and the entry amended his name from ‘Brian Ratcliffe Eley’ to ‘Brian Eley’. The source added by Gaige in the 1994 edition was ‘personal interview’.


The Wikipedia article on Eley includes a link to a webpage stating that he died in Amsterdam on 6 April 2022. However, we note too a page about Eley’s ‘reported death’ on the Yorkshire Chess Association website.


An addition on 16 November 2022 from John Townsend (Wokingham, England):

‘C.N. 9034 advised that Jeremy Gaige had amended Eley’s name from “Brian Ratcliffe Eley” to “Brian Eley”. A third variant, “Brian Russell Eley”, was used by his mother in her will.

The National Probate Calendar shows that Eley’s mother, Jessie Eileen Eley, died on 19 March 2012 and that her will was proved on 12 October 2012 at the Newcastle upon Tyne probate registry. Regarding the will itself, one must respect the family’s privacy, but I feel that the following can be disclosed without being intrusive, especially in view of the public interest in Brian Eley.

The will shows that she appointed a firm of lawyers as executors and trustees with instructions to sell all her property and to hold the proceeds upon trust for the benefit of her son, “Brian Russell Eley”. However, if he could not be located within a period of six calendar months following her death, “with all reasonable steps being taken to locate him”, or if he did not survive her, then the proceeds were to go to another (named) relative, and if that relative were to predecease her, then to another (named) relative. The will was written on 25 September 2008. The probate grant indicates that the gross value of the estate did not exceed £325,000.

The interval between death and probate seems consistent with the specified six months having elapsed, though that is not certain.

Identifying the death of Eley’s father, Harold Eley, is less certain, but, from the information available, it seems likely that he had died in the Scarborough registration district in the fourth quarter of 1996. If that is so, his estate appears to have been the subject of an administration granted on 27 October 2005 in the Manchester probate registry, some nine years after his stated date of death, 17 December 1996.’