It has frequently been stated that this photograph of Alekhine and Capablanca was taken in 1927, but it is a demonstrable fake. The matter has been discussed in a series of C.N. items, and a digest of them (slightly edited) is presented below.

Luca D’Ambrosio (Bolzano, Italy) asks for information about the well-known photograph of Alekhine and Capablanca, which is generally said to have been taken during their 1927 world championship match. Mr D’Ambrosio considers that there are sufficient unnatural points (lighting, background, etc.) to suggest that it is a montage. We offer a number of observations:

1) The photograph is to be found on, for example, page 165 of Aleksandr Alekhin - nepobezhdennyi chempion by Y.N. Shaburov (Moscow, 1992), page 164 of Das Schachgenie Aljechin by I. and W. Linder (Berlin, 1992) and in editions of volume one in Kasparov’s Predecessors series which have illustrations (e.g. the Russian and Italian versions).

2) Capablanca appears in a reverse shot of the portrait given on page 14 of the ‘1. Extra-Ausgabe’ of Kagans Neueste Schachnachrichten, published in late 1925 or early 1926. This picture was also the illustration in the Wildhagen volume on Capablanca (Hamburg, 1963). [Later, C.N. 3519 reproduced the same photograph from opposite page 244 of the December 1925 issue of L’Echiquier.] For purposes of comparison with the above photograph, we give Capablanca facing in both directions:

3) The board position in the Alekhine-Capablanca photograph is identifiable as from Nimzowitsch v Alekhine, Semmering, 7 March 1926. Although we have not found such an Alekhine picture from that event, the tournament book by Robert Laseker (published in Mährisch-Ostrau in 1934) contains the following photograph of Gilg and Spielmann:

[C.N. 4532 remarked that when this picture was published on page 143 of the November 1926 American Chess Bulletin the third person was identified as ‘Washburn Jr., son of the American Ambassador in Vienna’.]

It will be noted that the board, pieces, clock and background correspond to those in the Alekhine-Capablanca photograph.

5) In view of the foregoing we believe that the Alekhine-Capablanca photograph must indeed be regarded as a montage.

From a plates section in volume one of Kasparov’s Мои великие предшественники (Moscow, 2003):

We have now found that the Alekhine-Capablanca picture appeared in the book on the 1927 world title match edited by Alekhine’s brother, Alexei, i.e. Match na pervenstvo mira Alekhin-Capablanca (Kharkov, 1927):

The caption asserts that the photograph was taken on the first day of the match.

We have also come across another Capablanca-Alekhine photograph which is a more obvious forgery:

It was given on page 267 of the December 1927 issue of the Swedish magazine Schackvärlden. The Capablanca part of the photograph is recognizable as coming from a shot of him with Emanuel Lasker (in Moscow in 1925). See, for instance, the picture section of the Dover reprint of the New York, 1924 tournament book. For some reason the manipulator altered the position and depicted the board the wrong way round.

‘I found an interesting drawing in a recently acquired book, Lehrbuch des Schachspiels by Emanuel Lasker (4. Auflage, 1927). Bound together with the book was a German-language newspaper cutting reporting on the third round of the Moscow, 1925 tournament and dated 13 November. The report included a sketch of Capablanca and Lasker seated at a chess board. The position on the board makes no sense.’

Capablanca and Lasker met in the first round of the Moscow tournament, on 10 November 1925, the opening being a Queen’s Gambit Declined. The Capablanca sketch is evidently based on the photograph of him given in our earlier items and published on, for instance, page 14 of the ‘1. Extra-Ausgabe’ of Kagans Neueste Schachnachrichten in late 1925 or early 1926, whereas the drawing of Lasker corresponds to a photograph given two pages earlier in the same issue:


The fake Alekhine v Capablanca photograph continues to crop up in various guises, and we recently even acquired a mousepad depicting it. As regards the Alekhine part of the picture, the German tobacco card below (which features A. Alekhine, V. Tietz and A. Nimzowitsch) may be noted, not least because C.N. 3513 reported that the board position in the Alekhine v Capablanca photograph was from Nimzowitsch v Alekhine, Semmering, 1926.

For another copy of the tobacco card, together with a discussion of the complete set, see pages 42-43 of the May 2005 CHESS (an article by Gareth Williams).

C.N. 4694 mentioned that the Alekhine part of the above tobacco card is a familiar photograph of Alekhine to be found on, for instance, page 72 of Schach – ernst und heiter by Rolf Voland (Berlin, 1981), but we have yet to find the full Alekhine-Nimzowitsch photograph. The main unresolved point in this affair is how the fake Alekhine-Capablanca photograph originated.


The fake photograph of Alekhine and Capablanca continues to be disseminated unquestioningly. It was on prominent display at the 2013 Alekhine Memorial Tournament and is on page 250 of Alekhine’s My Best Games of Chess 1908-1937 (Milford, 2013).


We summarize, firstly, what has been established so far regarding the fake Alekhine-Capablanca photograph, supposedly taken during the 1927 world championship match in Buenos Aires.

The picture of Capablanca was on page 14 of the ‘1. Extra-Ausgabe’ of Kagans Neueste Schachnachrichten, published in late 1925 or early 1926: A crude juxtaposition of the two pictures, with reversal of the Capablanca one, gives this: When the fake photograph appeared in the book on the 1927 world title match edited by Alekhine’s brother, Alexei, i.e. Match na pervenstvo mira Alekhin-Capablanca (Kharkov, 1927), it was described as taken on the first day of the match. To date, that has been the earliest known publication of the picture.

Now, however, Christian Sánchez (Rosario, Argentina) has found that it had been printed on page 358 of Ilustrirani Slovenec, 30 October 1927: Luc Winants (Boirs, Belgium) adds that the photograph appeared in various Dutch newspapers shortly after the world championship match ended, e.g. in the 6 December 1927 issues of Het Centrum and the Nieuwe Tilburgsche Courant.

The French edition of Wikipedia is one of many language versions which give (on both masters’ pages) the fake photograph of Alekhine and Capablanca: ‘This picture, which originated on an anonymous Twitter account on 30 November 2016, has been widely published on the Internet, and notably in a Huffington Post article the following day.

It is an obvious concoction from a 2011 photograph. Such compositions are easy to make, and it took me just a few minutes to adapt the same original picture to include the fake Alekhine v Capablanca photograph:’ 
C.N. 3958 mentioned a claim that Adolf Hitler was a chessplayer. It emanated from one of the chess world’s least credible sources, yet we note that a reference to Hitler having possibly played chess with Lenin in Vienna in 1909 appeared on page 188 of Persönlichkeiten und das Schachspiel by B. Rüegsegger (Huttwil, 2000):

No Hitler-Lenin illustration was provided in Rüegsegger’s book, but now Edward Hamelrath (Dresden, Germany) sends us the following picture: 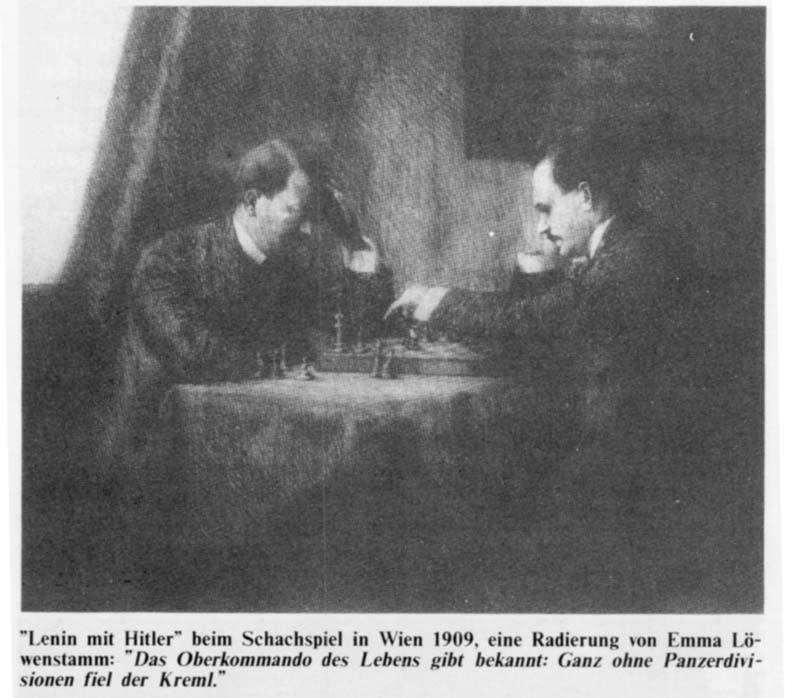 ‘This etching comes from the extreme right-wing (and now defunct) magazine Europa Vorn (spezial Nr. 1/4. Quartal 1991), in an article entitled “Ungeist aus der Flasche” by a “v. Freisaß”. The article is just a rambling diatribe on twentieth-century world politics and makes no reference to the picture itself. It is not even clear exactly what the title is – either “Lenin mit Hitler” or “‘Lenin mit Hitler’ beim Schachspiel in Wien 1909”. (The “Das Oberkommando ...” comment under the picture was simply plucked out of the text.) In any case, the Hitler figure corresponds more to his appearance in the mid-1920s than in 1909.’

Further information on this bizarre matter will be welcomed. In the meantime readers are, of course, advised to view it with extreme circumspection.

Yury Ryabokon (Moscow), who is a producer with the Russian broadcasting company NTV, asks whether more information is available about this purported picture of Hitler and Lenin (published in the magazine Europa Vorn, spezial Nr. 1/4. Quartal 1991), which a correspondent sent us in 2005.

At that time, the picture became widely known and gave rise to a barrage of speculation, though no facts. Is it possible to do better today? 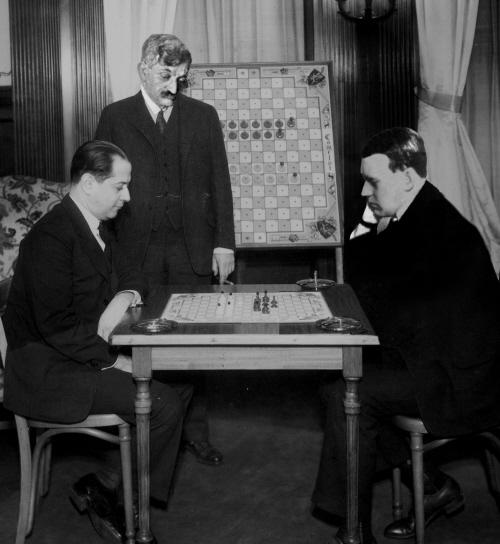 The above photograph (Capablanca, Lasker and Alekhine) comes from a webpage of the World Camelot Federation, and we reproduce it with the permission of the Federation’s President and Founder, Michael Nolan (Troy, MI, USA). He informs us that he created it on the basis of this picture: 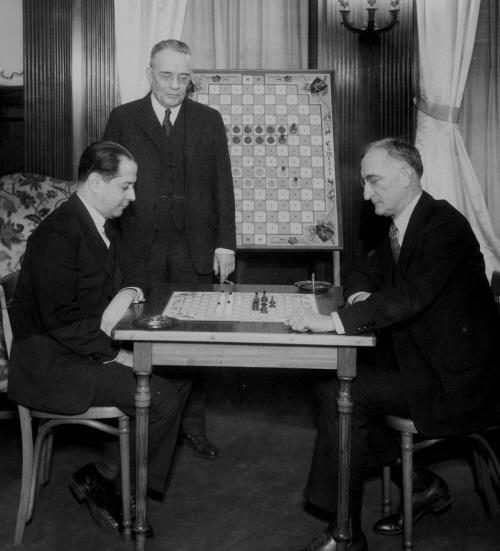 Here, Capablanca’s opponent is the Camelot and bridge expert Sidney Lenz, while E.V. Shepard (another bridge authority) looks on.