Wanted: games drawn under the 50-move rule. The only example that comes immediately to our mind is S. Lipschütz-H.E. Bird, New York tournament, 9 April 1889, which lasted 159 moves and was described as a ‘long and weary game’ by Steinitz in the tournament book.

We add some references from the BCM’s Quotes and Queries column:

The last example is extraordinary since the draw came about on the 78th move (surely, then, the earliest ever). And both sides still had all their pawns.


Recent disputes about amendments to the 50-move law serve as a reminder of an old controversy which arose during the 1895 Paris match between Janowsky and Mieses. The March 1895 BCM, pages 132-133, reported:

‘In the tenth game of this match, there occurred a position of great interest as bearing upon the difficult and improperly defined subject of the 50-move rule. At the 65th move, M. Janowsky had nothing left but two knights, and his opponent only two isolated pawns; whereupon, according to the rule, Herr Mieses claimed that M. Janowsky must mate him in 50 more moves. The latter at once protested, the rule in France being to allow 60 instead of 50 moves under such circumstances. The referees decided that the moves should be counted, and the question reserved for the umpire’s judgment. The game then proceeded, and at the 78th move, M. Janowsky having taken a pawn, the counting according to the rule began afresh from that point. At the 137th move, that is to say 59 moves from the re-commencement of counting, the game was adjourned, and as from the position it could only be a draw, there was no difficulty. Supposing, however, that at the point of adjournment, a mate could have been given in a few more moves, say at the 65th or 70th move, what, asks the editor of the Stratégie, ought the umpires to decide in such a case? In this kind of ending, with two knights against a pawn, it has been demonstrated in the Stratégie of 1891, page 84, that there are numerous positions which require 70 or 75 moves to effect the mate. Can a game then be adjudicated drawn wherein, with the best play, mate cannot be given in 50 or even 60 moves?’

‘For some weeks past the Canadian chess columns are discussing the cause célèbre Shaw v Ryall, the bone of contention being the application of the 50-moves rule. In the preceding Correspondence Tourney Mr Shaw’s opponent lost on the sixth move by a gross oversight his queen for a knight, whereupon he, instead of resigning, called upon Mr Shaw to mate him in 50 moves, the game otherwise to be called a draw. Mr Shaw refused, whence an appeal to the conductor, Dr Ryall, who decided in favour of the widowed game. Mr Shaw continues the game under protest, and appeals to the tribunal of public opinion. We confess to have always considered the reason for this rule was not to save hopelessly lost games but to prevent pugnacious chessplayers from protracting their contests when not able to win up to the Greek Kalends. Our interpretation is simple enough: in all difficult endgames, but only in these, the weaker party has the right to limit the fight to 50 moves, with the proviso that whenever a material change of forces takes place the counting may recommence. We must add that even with our interpretation the rule appears to us unjust, and we could quote many most natural end-positions where the win is easily demonstrated analytically, but cannot be achieved within 50 moves.’

“Counting 50 moves. If, at any period during a game, either player persist in repeating a particular check, or series of checks, or persist in repeating any particular line of play which does not advance the game; or if ‘a game-ending’ be of doubtful character as to its being a win or a draw, or if a win be possible, but the skill to force the game questionable, then either player may demand judgment of the Umpire as to its being a proper game to be determined as drawn at the end of 50 additional moves, on each side ...”

In the first game at New York, 1889 between Max Judd and Mikhail Chigorin this position was reached with Black to play his 46th move: Judd (White) demanded a 50-move count, and the Umpire allowed it. In the next 50 moves each side queened a pawn, and there were many pawn moves, but as these were not addressed by the rule Judd claimed a 50-move draw after Black’s 96th move, in this position: Chigorin protested, and the Umpire demanded that the game continue. According to the game notes on page 33 of the tournament book, Judd said that his moves had been determined by the belief that the claim would be automatically allowed after the 50-move count. The Umpire forfeited the game to Chigorin, and Judd’s appeal was rejected, partly because he had not complied with the Umpire’s decision that the game should continue. Chigorin ultimately tied for first prize in the tournament.’

‘Reporting on the Donner Memorial tournament, on pages 516-517 of the October 1995 BCM, John Nunn gave the conclusion of the Khalifman v Salov game from the last round. He covered the interesting point of how to claim a draw under the 50-move rule and contrasted it with the procedure under the threefold-repetition rule. Khalifman incorrectly claimed a draw before making his 75th move, which would have been the 50th under the 50-move rule.’

‘The procedure for the two kinds of draw (repetition of position and the 50-move rule) has now been standardized (at least since the rules applicable as from July 2014), i.e. a player can wait for the situation to occur or can write down the move that will bring it about and can call the arbiter.

“9.3 The game is drawn, upon a correct claim by a player having the move, if:

a. he writes his move, which cannot be changed, on his scoresheet and declares to the arbiter his intention to make this move which will result in the last 50 moves by each player having been made without the movement of any pawn and without any capture, or

b. the last 50 moves by each player have been completed without the movement of any pawn and without any capture.”

So what Khalifman did wrongly on the occasion described by John Nunn would now be a valid claim.

At Wijk aan Zee in 1973, when Peter Markland was playing in the B group and I was in the Reserve Master group, he complained to me that his claim of a threefold repetition had been rejected (versus Quinteros). I was very surprised that Markland did not know the rule (although by that time he had played in numerous master tournaments). He had made his 41st move on the board before making the claim, which accordingly, was refused. His opponent played a different move and soon won.’

‘8. A player may at any time call upon his adversary to mate him within 50 moves (move and reply being counted as one). If by the expiration of such 50 moves no piece or pawn has been captured, nor pawn moved, nor mate given, a draw can then be claimed.’

The Rules were reproduced on pages 37-38 of the Brooklyn Chess Chronicle, 15 December 1883.

The Cape Times reports that a very unusual case of a draw recently occurred at the Cape-town Chess Club. Mr A.J.A. Cameron, the winner of the handicap tourney of the current year, had to play his last tourney game with Mr J. Frank, to whom he had to concede the odds of the queen’s knight. Each of the players made 50 moves without a capture, and the position arrived at was such that neither player could break through without the sacrifice of a piece. Consequently, under the following clause of the British Chess Code the game was declared drawn: “A game in which checkmate has not occurred is treated as drawn if, before touching a man, the player, whose turn it is to play, claims that the game be treated as drawn, and proves that the last 50 moves on each side have been made without a capture.” The Cape Times characterizes the occurrences as “probably unprecedented”.’ 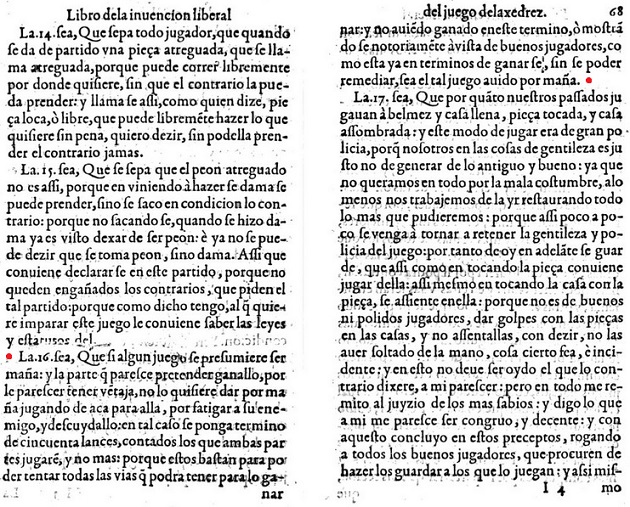