We present a compilation of unresolved matters regarding Bobby Fischer, including an obscure match played in Belgrade in 1958, a three-word note by Fischer which has perplexed commentators, and a collection of his 52 (not 60) Memorable Games.

In the first years of the 1960s what attempts did Fischer make to bring out a collection of his early games? C.N. 2664 noted that page 224 of the September 1963 Chess Life had this box announcement:

‘Want to Get Published?

Is anything more known about this publication project? (It should be noted that his book Bobby Fischer’s Games of Chess had already appeared, in 1959.)

As ever, the call is for solid information. This is not the place for observations along the lines of ‘If memory serves, my understanding has always been that I read somewhere that maybe there was talk once of a rumour that someone perhaps mentioned an oral tradition that it may possibly have been claimed that it was widely believed that …’.

Concerning the final paragraph, other precursors of nescience include, ‘My best guess would be that ...’, ‘If I had to guess I would say that ...’, ‘I think I read or heard somewhere that ...’ and ‘The last I heard was that ...’

Another phrase not recommended:

As reported in C.N. 4854, A.R.B. Thomas (1904-85) gained a dose of immortality through being quoted by Fischer in a mysterious note in My 60 Memorable Games (New York, 1969). This occurred in his annotations to the second match-game between Fischer and Reshevsky in 1961 (game 26), of which the conclusion is reproduced below:

The logic of the note is unclear. Since 28 Rxg7 receives an exclamation mark, it might even be inferred that Fischer’s comment ‘Right, Mr Thomas!’ was sarcasm. Puzzlement over this matter was, understandably, expressed by a reader on page 66 of the February 1989 Chess Life. Page 267 of ‘Garry Kasparov on Fischer My Great Predecessors Part IV with the participation of Dmitry Plisetsky’ (London, 2004) gave ‘28 Rxg7!? (28 Nd2!)’.

Thomas’ letter in CHESS was published on page 249 of the Easter 1966 issue:

The book to which Thomas was referring was the Fischer biography by Frank Brady (Profile of a Prodigy), published the previous year. There is, though, a curiosity, as Thomas was not the first person to suggest 28 Nd2. Indeed, he was not even the first in CHESS. Several years earlier, on page 409 of the October 1961 issue, the following appeared:

On page 14 of the January 1992 Chess Life a reader, Luis F. Sabogal, asked Larry Evans about Fischer’s annotation. The reply:

‘It was subtle sarcasm. While working on the manuscript with Bobby, I assumed the point of 28 RxB“!” was that practical players should seek forcing lines in the heat of battle and save the cute stuff for the post mortems. But Mr Thomas was right!’ 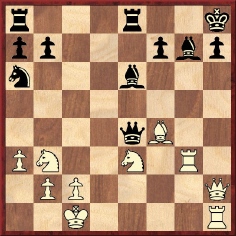 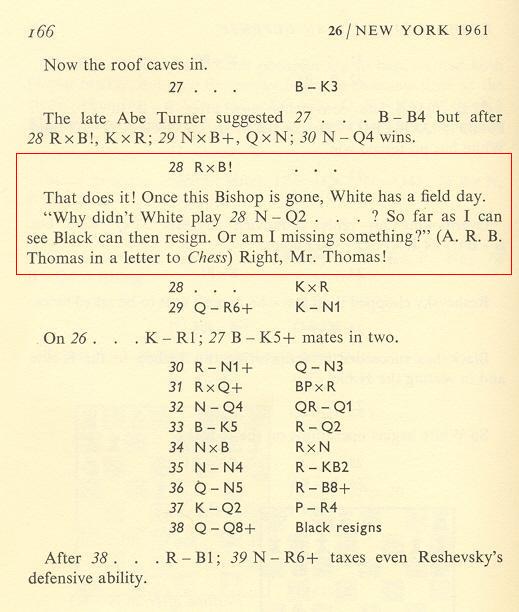 ‘That does it! Once this Bishop is gone, White has a field day.’

Thus the reference to A.R.B. Thomas was added subsequently, at which time the concomitant need to remove the exclamation mark appended to 28 RxB may have been overlooked. Fischer’s ‘Right, Mr Thomas!’ observation would therefore be not sarcasm but acceptance of correction.


How many copies of Fischer’s Memorable Games are known to exist? (We are referring to the version with 52, not 60, games.) With the permission of Mr David DeLucia (Darien, CT, USA), C.N. 5352 reproduced the following from page 265 of his book, David DeLucia’s Chess Library A Few Old Friends (Darien, 2007):

Dated 1967, this comes from ‘a rare “review copy” of a book that was never published which was in Bobby Fischer’s personal library’. Mr DeLucia also remarked that two years later My 60 Memorable Games was published, ‘the first 52 being the same as the review copy’.

For further information on My 60 Memorable Games, see our feature article.

As noted in C.N. 2365, an interesting gap in the Fischer record is related on page 58 of The Unknown Bobby Fischer by John Donaldson and Eric Tangborn (Seattle, 1999):

‘Fischer’s match with Milan Matulović is shrouded in mystery. The basic details are known. That it was held July 20-26, 1958, at the Chess Club Slavia in Belgrade alongside a match between Bent Larsen and Milan Vukčević. Bobby won the match 2.5-1.5, but only the first game, a win by Matulović, has surfaced. The results of the final three games are not known, though game four had Bobby as White in a French that went 50 moves.

Yugoslav magazines of the time had very little on the match, which was held prior to Bobby’s participation in the Interzonal. Matulović doesn’t seem to have his game scores.’

‘John Rasmussen of Hicksville, New York, has pointed out to me that Bent Larsen did play Milan Vukčević in a match, but in 1955 and not 1958 as Vukčević remembered it. Edmar Mednis, in How to Beat Bobby Fischer, describes the Fischer-Matulović event as a public training match held to help Bobby get ready for the upcoming Interzonal at Portorož. Does anyone have the final three games of the match?’

No further information has, to our knowledge, been found to date. More generally, it may be mentioned here that we have compiled a list of books about Fischer (as well as about Kasparov).

C.N. 4689 asked for information about any photographs of Fischer taken between the mid-1970s and his re-appearance in 1992. It is a matter on which no progress has been made so far, and the same applies to a topic raised in C.N. 4769: what is the earliest known photograph of Fischer? Suggestions from readers will be welcome.

Still on the subject of photographs, C.N. 3588 quoted from pages 161-162 of Karpov on Karpov (New York, 1991), during a description of the mid-1970s discussions between Fischer and Karpov on a possible world championship match:

‘After the talks we set out for a stroll around Tokyo. I was afraid that autograph hounds would harass us, but, to my amazement, not one person approached us. Here were two of the best chessplayers in modern times, whose photographs practically never left the front page, walking down the street – you’d think at least someone would have noticed. Later I understood that such a thing is possible in only one place on earth: Tokyo.

One photograph – the only one in which Fischer and I are together – was taken. The chairman of the Japanese Chess Federation, Matsumoto, ingratiated himself with Fischer, who disliked journalists even more than their articles, and took our picture “for his family album”. A few days later the shot was sold to Agence France-Presse, who in turn distributed it worldwide.’

Where has the photograph been published?

In C.N. 4594 Joop Elderhorst (Rotterdam, the Netherlands) asked about the correct game-score of Barcza v Fischer, Zurich, 1959. Whereas various books and databases state that play ended at move 95, our correspondent pointed out a story attributed to Tal on page 25 of Russians versus Fischer by D. Plisetsky and S. Voronkov (Moscow, 1994), as well as on pages 29-30 of the 2005 edition (published by Everyman). Below is the latter book’s translation of what Tal purportedly stated:

‘In his game with the oldest competitor, the Hungarian Grandmaster Gideon Barcza, Fischer had no advantage, but, not wishing to let his opponent go in peace, played on to the 103rd move. The game was adjourned three times and the contestants used up two score sheets, but even when there were only the kings left on the board, Fischer made two more moves!. Draw! Stunned by such a fanatical onslaught, Barcza could barely get up from his chair, but Bobby nonchalantly suggested:

“Let’s have a look at the game from the beginning. I’m sure I could have played better at some point!”

“Look, I have a wife and children. Who’s going to support them in the event of my untimely death!”’

Exactly where Tal (who was a participant in the tournament; indeed, he won it) made these remarks is unclear, but we have found no contemporary source suggesting that the game continued to move 103. For example, pages 118-119 of the special issue of the Schweizerische Schachzeitung devoted to Zurich, 1959 stated that the game ended in the following position, when White had just captured his opponent’s queen with 95 Qxa4+:

‘It is hardly likely that another eight moves would be played in a game between masters of such a level. Moreover, for a bare-kings ending to occur Black would have had to allow White to take his pawn.’

Milan Ninchich (Macquarie, ACT, Australia) supplied in C.N. 4966 an extract from page 41 of Barbra The Way She Is by Christopher Andersen (London, 2006):

The Erasmus connection is well known, but the question posed, and currently unanswered, is where the quotes about ‘Fisher’ came from.

The photograph below, from page 114 of the April 1959 Chess Review, shows Fischer at the time he was a student at Erasmus Hall: Our correspondent commented, firstly, that the note at Black’s eighth move is faulty: 9...O-O is not possible, since Black has already castled. Secondly, he pointed out that his 1988 Faber and Faber edition of the book (a paperback with a black cover) attempted to correct the mistake but made matters worse: instead of ...O-O being changed to ...B-N2 in the note to Black’s eight move, that alteration was introduced, impossibly, in the score of the game, at move five:

We added a complication: our own copy of the 1988 ‘black edition’ is slightly different from Mr Hinton’s (on the back cover they are priced at £4.95 and £7.99 respectively). Our copy still has ...O-O in both places.

In C.N. 3994 Michael McDowell (Westcliff-on-sea, England) quoted the following from page 16 of A Tribute to G.F. Anderson compiled by G.W. Chandler, C.R. Flood and R.C.O. Matthews (published by the British Chess Problem Society in 1974):

‘The logical element in Kriegspiel problems gives them an appeal to players that many conventional problems lack. Not long after Are There Any? was published, Robert C. Stephenson, one of our members, wrote to Anderson:

“I write because I must have another copy of Are There Any? I had solved only up into the thirties when last night I incautiously carried it down to the Marshall Club to show it to Jack Collins. Then, seeing it in Jack’s hands, Bobby Fischer pounced upon it in great excitement and before the evening was over the two of them had so made it theirs, were so comically oblivious of the mere owner, that I hadn’t the heart to explain that I had brought it to show, not to bestow.”’

‘Anderson’s 1959 book Are There Any? is a fascinating collection of Kriegspiel problems. I am not aware of any other reference to Fischer showing a direct interest in the composition side of chess (as opposed to Benko setting him problems to solve).’

Jack Collins was also mentioned in C.N. 4688, when Javier Asturiano Molina (Murcia, Spain) drew attention to the following passage about Fischer on page 483 of ‘Garry Kasparov on Fischer My Great Predecessors Part IV with the participation of Dmitry Plisetsky’ (London, 2004):

Our correspondent asked what is known about this ‘training match’ against Collins, but so far nothing has come to our attention.

The above article about Fischer on pages 97, 98 and 100 of Life, 21 February 1964 was referred to in C.N. 5200. It contains a number of colourful observations ascribed to the young master, but is it known that they are ‘safe’? We refrained from quoting from such an article, bearing in mind Fischer’s remark, ‘A lot of these quotes about me are not correct’ (see our article Instant Fischer).

Indeed, the largest single category of loose ends regarding Bobby Fischer arguably relates to remarks attributed to him without any precise, reliable source. A major contribution to the cause of chess truth, and to Fischer’s memory, would be a webpage featuring only those quotes which are known to be correct and for which exact citations are supplied.


Note: A shorter version of this article appeared at ChessBase shortly after Fischer’s death in January 2008.