An extract from an article by D.W. Fiske entitled ‘Newspaper errors’ which was published in the Syracuse Journal of 22 June 1865 and reprinted on pages 226-228 of Memorials of Willard Fiske by H.S. White (Boston, 1920):

‘That a piece of information appears in print is beginning to be regarded as pretty good evidence of its incorrectness. So widespread has this evil become that one leading journal which, singularly enough, appears to have a few grains of honesty left, actually felt obliged recently to caution its patrons against the communications of one of its own paid writers. It is very evident that the freedom of the press, which our fathers considered to be one of the safeguards of liberty, is fast degenerating into an unbearable license; and that this constitutional freedom is interpreted by many editors as an unlimited freedom to tell lies. Those perversions of the truth, of which sensational writers are guilty, constitute an evil which the general intelligence of the public will ultimately correct. But the misstatements which arise from the carelessness or ignorance of newspaper employés is [sic] a nuisance within the immediate control of all newspaper managers and more easily abated. The columns of many of our contemporaries are crowded with errors of such a character that they might easily be avoided by a moment’s examination of a map, a gazetteer, a biographical lexicon or a cyclopedia.’


Page 414 of the posthumous collection of Fiske’s writings, Chess Tales & Chess Miscellanies (New York, 1912) quoted a remark on him from page 397 of The Nation, 16 May 1901. It included the following:

‘He has further conceived the idea of starting a chess magazine printed in Icelandic, and the first two numbers of his journal have actually been issued. It bears the title Í Uppnámi (En prise).’

‘Printed in Leipzig and written in Icelandic, the chess magazine I Uppnami which Fiske published in 1900 and 1901 was among the better chess periodicals in the world at the time.’

Not having seen the magazine, we should welcome an overview of its contents.

Who is the chess figure in this trio? We are feeling rather confident that no reader will be able to identify him.

No reader identified the chess figure in the photograph. It was D.W. Fiske, who was standing on the right, alongside Michele Monzecchi and Enrico Stella. We reproduced the picture from Willard Fiske Life and Correspondence by H.S. White (New York, 1925), and below is another shot of Fiske on the same page:

The photograph of D.W. Fiske discussed in C.Ns 3543 and 3558 has prompted some observations from Calle Erlandsson (Lund, Sweden). The first of them relates to Fiske’s Icelandic chess periodical Í Uppnámi, which was mentioned in C.N. 3205.

‘On the 80th anniversary of Taflfélags Reykjavíkur in 1980 a reprint of volumes 1-2 (1901-02) of the magazine Í Uppnámi (Íslenzkt Skákrit) was issued in 250 numbered copies. (My copy is No. 52.) On the back page of No. 3, volume 2 (1902) there is an advertisement for “Skákdæmakort eptir William Orville Fiske” (five postcards with 17 diagrams [skákdæmum]). The price was ten aurar for one card and 35 aurar for all of them. At the end of Fiske’s entry in the Oxford Companion to Chess there is a brief reference to D.W.F.’s younger brother, William Orville Fiske. What more is known about him?

There was a reference to W.O. Fiske on page 9 of Willard Fiske Life and Correspondence by H.S. White (New York, 1925):

‘Some mention should be made here of Mr Fiske’s younger brother, William Orville, who was born in 1835 and died in 1909. He had the musical gifts which his elder brother missed and the lack of which he often mourned. A handsome man in his prime, with golden hair and beard. Besides teaching the piano, the organ and singing, and officiating as a musical director, he was for many years the organist of St Mary’s Church in Syracuse, and married the niece of its pastor, Father O’Hara, herself a musician, and soprano in the choir. Earlier, Mr Fiske had held a professorship of music in the Fort Plain Seminary. His musical compositions were many and varied, and of artistic worth. In 1872 Oliver Ditson published a work edited by Mr Fiske entitled The Offertorium, a collection of music for the services of the Catholic Church, comprising masses, vespers, anthems, etc. Mr Fiske himself composed much sacred music, but did not disdain the lighter forms of composition, including marches, waltzes, galops, and other pieces for the piano, as well as songs and choruses. Many of Professor Fiske’s Psi Upsilon verses were set to music by his gifted brother.

William Fiske was a chess enthusiast too, and for a while edited a chess column in the Syracuse Standard, at the time when his brother was editing the New York Chess Monthly; and he also won the first prize at a chess tournament in Syracuse. In E.B. Cook’s great collection of chess problems (New York, 1868), 18 specimens by W.O. Fiske are included, comprising mates in two, three, four and seven moves.

The Boston Waverly Magazine published in its earlier years many of William Fiske’s musical compositions. In Vol. XIV (1857) appeared a “Chess Polka” and in Vol. XVIII (1859) a “Caissa Quickstep”, both inscribed to D.W. Fiske, who is described in the latter as “Editor of the New York Chess Monthly”. The name of the author of these two productions was given as “Guglielmo Orville”, evidently an Italianized pseudonym of the fraternal composer.’

As regards the question at the end of Mr Erlandsson’s contribution, it certainly seems that no book by Fiske entitled Chess in Iceland existed in 1901. Consequently, the most likely explanation for the reference in Í Uppnámi is that the section entitled ‘A Grimsey Legend’ had already been type-set: it may be noted that the specified page numbers of the feature (i.e. 68-69) were as in D.W. Fiske’s posthumous (1905) book Chess in Iceland and in Icelandic Literature. 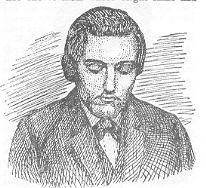 Although this sketch (from Brentano’s Chess Monthly, December 1881, page 369) might be taken to depict Morphy, it was intended to be D.W. Fiske. It seems to be based, not too successfully, on Fiske’s appearance in the New York, 1857 photograph given in C.N. 3828 (standing seventh from the left; see below).

A snippet about Fiske is that he was a friend and associate of Mark Twain. Both volumes of Mark Twain’s Autobiography (New York, 1924) contain references to Fiske: pages 214-215 of volume one and pages 341-349 of volume two. On page 344 Mark Twain wrote regarding Fiske:

‘He was as dear and sweet a soul as I have ever known. His was a character which won friends for him, and whoso became his friend remained so, ever afterward.’

This photograph of Fiske comes from his posthumous 1905 book, although we have corrected the inverted version:

The following is the start of a letter from Morphy to D.W. Fiske dated 25 January 1858 which was reproduced on pages 26-28 of “Our Folder” (the Good Companion Chess Problem Club), 1 November 1920: 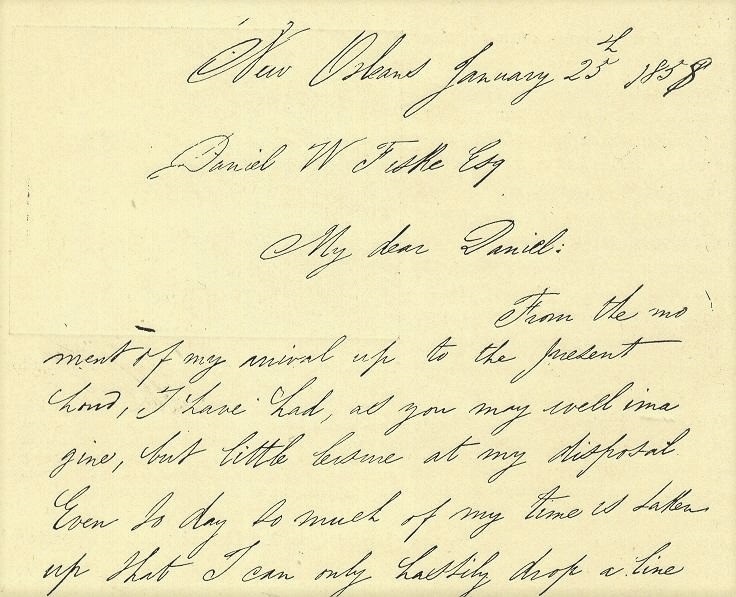 For a transcript of the full letter, see page 89 of David Lawson’s book on Morphy. 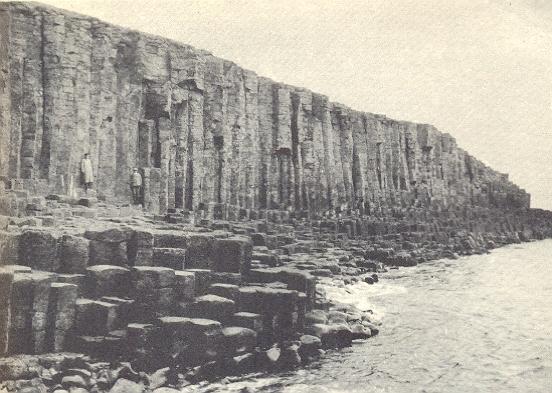 The above photograph, culled from page 41 of Within the Circle by Evelyn Stefansson (New York, 1945), is of the ‘rocky shore of Grímsey’. Below we reproduce page 38 of the book: 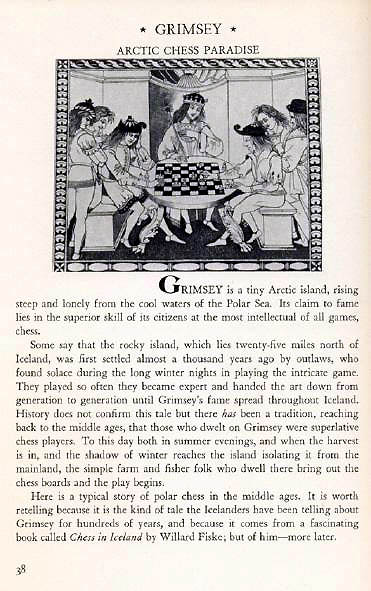 
In the second half of the nineteenth century, problems were sometimes referred to as ‘the poetry of chess’, but who coined the description?

‘Problem-making has been very properly denominated the poetry of chess. The same depth of imagination, the same fecundity of invention, the same quick perception of the beautiful, which characterize the poet, belong also to the chess strategist.’

‘Can anyone provide concrete information confirming or contradicting Miron Hazeltine’s assertion that he was co-editor along with Daniel Willard Fiske of the Chess Monthly during 1857? Many years later, and speaking about himself in the third person, Hazeltine wrote that “He was co-editor with D.W. Fiske, A.M., of Vol. I American Chess Monthly” (American Chess Magazine, June 1897, page 7).

“The Chess Monthly was started as a joint venture by Daniel W. Fiske and Miron J. Hazeltine acting as editors and publishers. The first issue appeared in January 1857. However, Fiske observed the rising star of Morphy’s reputation during the Congress in October and wished him to join the magazine as co-editor. Since Fiske was apparently the principle [sic] party of the venture, it seems he eased Hazeltine out. Within a month after Morphy’s arrival in New York, Fiske was expressing the hope that Morphy would be editing with him, beginning in the new year. Before the middle of December the matter was settled, and the printer notified that Morphy and Fiske would be co-editors beginning January 1858.”

Lawson offered no supporting citations for any of his points. I have access only to a reprint of the Chess Monthly, but the title page of that reprint indicates that Morphy and Fiske were editors of Volume I, which apparently was bound early in 1858.

I would appreciate learning what, if any, contemporary sources either confirm or deny Hazeltine’s 1857 association with the Chess Monthly, and, if he was so associated, what evidence survives proving Fiske orchestrated his removal from the publication.’

‘I am surprised at your telling me that Mr Murray still believes in the Rou Manuscript. Fiske dearly loved such mystifications in his younger days, and when his memory of this particular one was revived by my correspondence with him the zest returned – hence his correspondence with Notes & Queries and his later elaborate attempts to bolster up the story. How he came to father it on the particular person that he did I do not know, and cannot guess, but I presume his reading advised him of the existence of the person and he knew it would be impossible to dispute his statement. I think in former letters I have told you of some of his more elaborate hoaxes.’

We asked for information about hoaxes allegedly perpetrated by Fiske, and the matter has now been taken up by Harrie Grondijs on pages 52-54 of volume four of Chess Craze Bad (Maastricht, 2017), a 237-page hardback subtitled ‘Daniel Willard Fiske, chess bibliophile and chess visionary’. 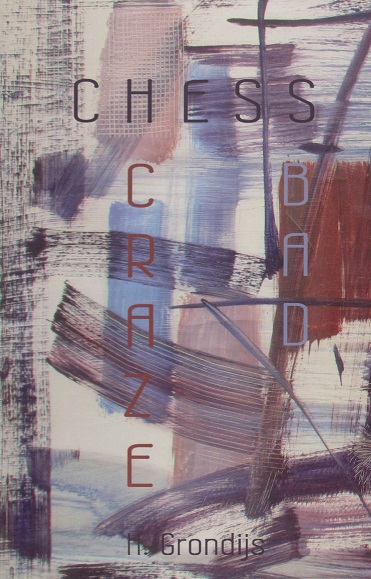 The relevant section, entitled ‘A real Fiske hoax’, follows up on the account of Fiske and Frère’s involvement in the Morphy-Staunton controversy in Chapter four of Thomas Frère and the Brotherhood of Chess by Martin Frère Hillyer (Jefferson, 2007). In describing a rancorous public argument between ‘Pro Recto’ and ‘Sancho Panza’, Martin Frère Hillyer identified the pseudonymous letter-writers as Fiske and Frère respectively, but Mr Grondijs demonstrates, with documentary proof, that this is not so. From page 53:

‘... the letters on both sides were written by Fiske: he played the parts of both “Pro Recto” and “Sancho Panza”.’

Produced in accordance with Harrie Grondijs’ usual fine standards, volume four of Chess Craze Bad has a print-run of only 37 copies. A comprehensive list of his books can be found in the catalogue of the Royal Library in The Hague.


Yasser Seirawan (Hilversum, the Netherlands) notes a relatively unfamiliar name among the latest additions to the US Chess Hall of Fame: Daniel Fiske. He wonders whether there are other ‘overlooked old-timers’ who deserve modern recognition for their contribution to chess (whether as editors, composers, administrators, organizers, sponsors, etc.).


See too our articles on the Staunton/Morphy/Edge affair and Paul Morphy and Chess Politics.


There is much rich material about Fiske on a Cornell University webpage.