The Times of 22 February 1986, page 15, has an interesting reference by Raymond Keene to the famous Fleissig v Schlechter game (1 b4):

‘The winning combination in that game was of such an outstanding nature that it launched Schlechter into his international career. He was invited to Hastings 1895 by an awed tournament committee ...’

The same writer’s book The Chess Combination from Philidor to Karpov (Oxford, 1977), pages viii and 46, labels the game ‘Vienna, 1895’, so it has clearly been assumed that it was played sometime in the first half of that year.

Warren Goldman (Gaiberg, Federal Republic of Germany), who notes that the source of the story about the tournament committee’s awe is probably the Hastings tournament book, informs us:

‘The game in question was played on 10 October 1893. In my research I have read that Fleissig was at least mildly irritated when the 1 b4 game appeared in the local prints. It seems that he objected to the publication of “offhand games”. This was one of a number of games he played with the seedling Schlechter. In any event, he did not deny losing the game in question.

I shall leave it to your judgement whether the “awed tournament committee” bit is overdrawn. Schlechter had tied in two matches with Georg Marco (1893 and 1894) and Adolf Zinkl (1894), played in two Vienna tournaments (1893 and 1893-94), and performed well enough in the Leipzig, 1894 event. This would give the committee sufficient grounds, doubly so if they were seeking to make Hastings, 1895 as “international” as possible. The Fleissig evergreen was, I feel, icing on the cake.’

One of the many other sources that fail to mark the game as a friendly or casual encounter is Every Game Check Mate by W.H. Watts and P. Hereford (London, 1932). Moreover, instead of Vienna, 1893 that book states Munich, 1895, and even makes Schlechter White, i.e. the loser. Caveat lector.

When Raymond Keene gave the Fleissig v Schlechter game in the Times, 27 April 1991, page 54[S], he dated it 1893. Without attribution, his annotations were reproduced on pages 67-68 of Keene On Chess (New York, 1999) and on pages 66-67 of Complete Book of Beginning Chess (New York, 2003). However, the date 1895 was allowed to stand in the Glasgow, 2002 edition of The Chess Combination from Philidor to Karpov. Regarding further inaccuracy by Mr Keene on Schlechter (‘Maitrer’ instead of Meitner) in the above-mentioned Times column of 27 April 1991, see Cuttings. With regard to the surprising statement that Schlechter was White, Mr Kalendovský reports that no correction appeared in any of the three subsequent columns. He asks what the truth is about this famous miniature.

It has often been dated 1895, and the book on that year’s Hastings tournament (page 352) stated concerning Schlechter:

‘His memorable game with Fleissig influenced the Committee greatly in selecting him.’

We discussed the game in C.N. 1128, quoting a contribution from the late Warren H. Goldman (Gaiberg, Germany), who was writing a monograph on Schlechter. At that time (February 1985) he believed the date of the game to be 10 October 1893, although with later research he concluded that the correct date was 10 August 1893, as given on page 12 of Karl Schlechter by R. Spielmann (Stockholm, 1924): With the words Caveat lector we concluded C.N. 1128 by drawing attention to Every Game Check Mate by W.H. Watts and P. Hereford (London, 1932), which indicated on page 115 that Schlechter was White (and that the game was played in Munich in 1895): It may be noted that the game had appeared on page 68 of the earlier volume Every Game Check Mate! by J. Douglas (London, 1916), with Schlechter as Black and no occasion specified:

Information about the game’s early appearance in magazines, and especially in 1893, will be appreciated. The score was given on pages 52-53 of the February 1894 Deutsche Schachzeitung, although with no mention of Schlechter. There was particularly cautious phraseology about the game having allegedly been lost recently by Fleissig (‘Angeblich soll diese Partie von dem Wiener Schachspieler Fleissig kürzlich verloren worden sein’). In 1895 the game was published more widely. For example, it appeared (without a date or occasion, but with notes by Mason) on page 353 of the August 1895 BCM, the score having been taken from the Times-Democrat. It was also given (headed Vienna, 1893) on page 122 of the December 1895 Chess Monthly.

The game is on pages 497-498 of Goldman’s posthumous book Carl Schlechter! Life and Times of the Austrian Chess Wizard (Yorklyn, 1994), with Schlechter specified as the winner and the occasion given as Vienna, 10 August 1893. It seems to us that those details are most likely to be correct, but, as ever, any further evidence – for or against – will be very welcome.

‘I would draw attention to the correspondence item which begins “Wien (B.F.)” on page 127 of the April 1894 Deutsche Schachzeitung. Fleissig admitted having lost the game in question to Schlechter, although he considered it a skittles game (“Husarenpartie”).

So there is no doubt about the authenticity of the game or about who won. The footnote on page 497 of Goldman’s book on Schlechter is obviously based on that Deutsche Schachzeitung item, although no source is given.

Deutsches Wochenschach published the game as played “some weeks ago in Vienna” on page 206 of its 30 June 1895 issue, quoted from the Times-Democrat.

The date “10 August 1893” is given (for the first time?) on page 52 of Carl Schlechter. Sein Leben und Schaffen published by B. Kagan in early 1920. The book included a collection of games mainly played in Schlechter’s youth:

These games were presumably taken from “Schlechter’s handwritten Notizbuch” mentioned on page 536 of Goldman’s book and now in Lothar Schmid’s possession.’

‘If I am reading it rightly, the Allgemeine Sport-Zeitung cutting (C.N. 6665) gives the move order as 13...Qxb5 14 Bf4 Nd7 15 Qxa8 rather than 13...Nd7 14 Qxa8 Qxb5 15 Bf4. This is an important difference as 13...Qxb5 cuts out the possible White continuation 14 Qxb7 which is available after 13...Nd7 and which might have muddied the waters somewhat. When I looked at the game as usually given, even before noticing this discrepancy, it had struck me as surprising that Schlechter should have played the loose and speculative 13...Nd7 rather than the more obviously solid and menacing 13...Qxb5, which computers confirm is more deserving of exclamation marks than the knight move. Did Schlechter perhaps play 13...Qxb5 after all?’

We have also noted a further discrepancy in the score, from the game’s publication (with only Fleissig named, as the loser) on pages 52-53 of the February 1894 Deutsche Schachzeitung:

Furthermore, Tom Crain (Modesto, CA, USA) reports that when the game was published on pages 59-60 of Lärobok i Schack by Ludvig and Gustaf Collijn (Stockholm, 1903) it was dated May 1895, and ...Nd7 was said to have occurred at move 13.


Further information of relevance to Fleissig Schlechter comes from Thomas Niessen (Aachen, Germany), with regard to the game’s appearance on page 841 of the 13 August 1893 issue of Allgemeine Sport-Zeitung (C.N. 6665). He notes an editorial remark on page 1245 of the 26 November 1893 issue. 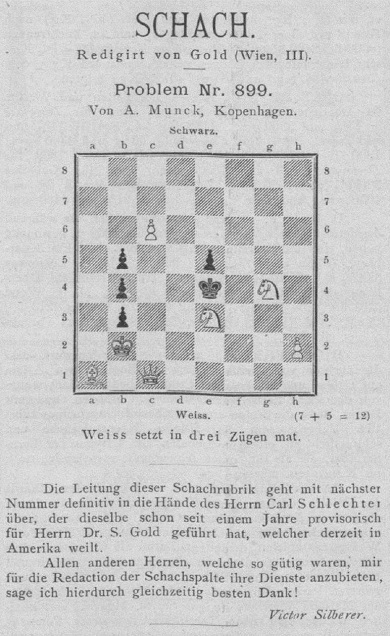 This note by Victor Silberer, the Editor, states that the chess column was about to be handed over permanently to Schlechter, who had been conducting it for the past year on a provisional basis.