Some information about Hans Frank (1900-46), the most prominent Nazi leader to be strongly interested in chess, is available in the books on Alekhine by P. Morán and L. Skinner/R. Verhoeven. Here, we begin by giving a series of photographs of him, i.e. a selection from those published in Deutsche Schachblätter (1936-41).

The first one was taken in Frank’s ministerial office on 21 February 1936:

Shortly before Christmas, 1940 Frank was presented with a chess table carved by Ukrainian mountain farmers, and the 1 February 1941 Deutsche Schachblätter deemed the event worth two-thirds of a page and the inevitable photograph (with Frank in the centre):

Finally, in November 1941 the magazine had the following picture, taken in Cracow, of Post, Frank and Alekhine seated, with Mross and Schmidt standing:

Deutsche Schachblätter ceased publication in March 1943. In Nuremberg on 16 October 1946 Hans Frank, having been convicted of war crimes and crimes against humanity, was hanged.

The following game, from a ten-game blindfold exhibition by Sämisch, was published on pages 87-88 of Deutsche Schachblätter, 15 March 1936, with annotations by White:


From 1939 to 1945 Hans Frank kept a diary, 11,000 typewritten foolscap pages, comprising 38 volumes [or 43 volumes; see C.N. 5533], and some of the material has been published over the years. One such publication (from which the above statistics are taken) is Hans Frank’s Diary by S. Piotrowski (Warsaw, 1961). It is a 320-page book, but the diary excerpts do not begin until page 207. No references to chess have been noted, but we wish to ascertain whether Frank’s complete Tagebücher did ever mention Alekhine, Bogoljubow or, more generally, chess under the Nazi regime. Has the matter ever been investigated by, in particular, Polish or German chess researchers?

The Foreword to the above-mentioned book (page 6) states:

‘Hans Frank’s Diary was handed over to the Polish authorities after the close of the Nuremberg trial and is now in the archives of the Ministry of Justice in Warsaw.’

We also have the longer edition Dziennik Hansa Franka by S. Piotrowski (Warsaw, 1957).

Below is a picture of Hans Frank in gaol following the fall of the Third Reich:

‘The tournament started on 8 September ... A large reception was held on the evening of the first day. This was attended by leading lights from the Nazi Party, the State Government and the Wehrmacht. ... The Chief Executive of the Großdeutscher Schachbund, Ehrhardt Post, spoke on the importance of forming a new chess organization ... In his speech, he also acknowledged the debt due to the two Reichsministers present, Dr Josef Goebbels and Dr Hans Frank, for their generous support of the tournament.’

See also page 150 of Deutsche Schachblätter, 1 October 1941. Did any German newspapers of the time have photographs of, or reports on, the reception?

Edward Hamelrath (Memphis, TN, USA) draws attention to a new book, Hans Frank (subtitle: Hitlers Kronjurist und Generalgouverneur) by Dieter Schenk (Frankfurt am Main, 2006) and quotes a reference to chess on page 177 (given below in our translation):

‘Frank was extremely interested in chess. He not only possessed an extensive library of chess literature but was also a good player, and he even “received” the Ukrainian chess master Bogoljubow at the castle. On 3 November 1940 he organized a chess congress in Cracow. Six months later he announced the setting-up of a chess school under Bogoljubow and the chess master Dr Alexander Alexandrovich Alekhine, and he visited a chess tournament in October 1942 at the “Literary Café” in Cracow.

Goebbels truly exploded when he heard of Frank’s activities:

“Frank is pursuing a policy which is anything but that sanctioned by the Reich. I have been shown letters in which he orders the setting-up of a chess seminar in Cracow under Polish management. That is evidently now very important when it comes to providing the necessary basic foodstuffs for the Reich and to putting together the organization that this requires. Frank sometimes gives the impression of being half mad. Some of the incidents that have been reported to me concerning his work are simply dreadful.”’

The Goebbels quote comes from his diary, and in an endnote on page 443 of the book the exact source is specified as ‘Goebbels Tagebuch, Teil II, Band 5, 21.8.1942’.

Martin Weissenberg (Savyon, Israel) quotes an extract from an article by Hans Kmoch about Nimzowitsch which mentions Hans Frank

‘My last meeting with Nimzowitsch was also the longest. It took place in 1934, when we were both following the second Alekhine-Bogoljubow world championship match as reporters. The games of the match were scheduled to be played in many parts of Nazi Germany – unfriendly territory for a Jew and not particularly safe for a Gentile either, in view of the tensions immediately preceding Hitler’s bloody purge of his political enemies, among them Ernst Röhm.

Nimzowitsch considered himself protected by three consulates: the Latvian because of his birthplace, the Danish because of his residence, and the Dutch because some of his reports were going to a newspaper in Holland. He boasted of this protection even to Reichsminister Hans Frank, who at that time was in charge of the “protection” of art and later became the governor of Nazi- occupied Poland. Frank followed a few games of the match and sometimes chatted with the masters and reporters, including Nimzowitsch. He even invited the whole chess troupe to his villa for lunch. The Jews Mieses and Nimzowitsch were included in the invitation, but only Nimzowitsch showed up. At the luncheon he demonstrated his usual persecution mania by complaining first about a dirty plate and then about a dirty knife. The Reichsminister, seated directly opposite him, pretended not to hear.

In Kissingen, where some of the match games were played, I was a guest in the same hotel at which I had stayed during the tournament in 1928. Overcrowded then, it was empty in 1934. At dinnertime, when the restaurant should have been crowded, there were only four people in the room: my wife and I, and, at another table, Frank and an elderly man who I later learned was the composer Richard Strauss. The sinister emptiness of that dining room, which the hotel manager attributed to “bad economic conditions”, should have been a forewarning, but the Nazi leaders understood nothing. Frank himself failed to understand what was going on under his governorship in Poland. He became known as “the butcher of Poland”, and for his war crimes he was hanged in Nuremberg.’

If any reader has Nimzowitsch’s reports on the 1934 world championship match we should be grateful to know whether they contain points of particular interest.

Olimpiu G. Urcan (Singapore) notes on a Dutch website a better version of the photograph (above) which was given in C.N. 5533. 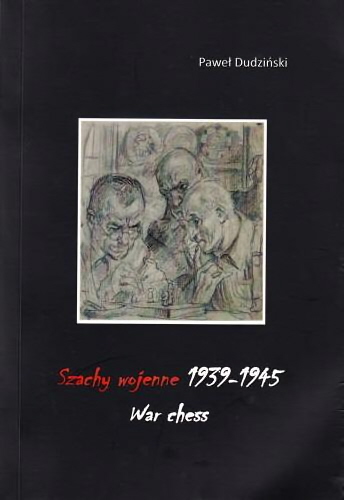 Paweł Dudziński (Ostrów Wielkopolski, Poland) has sent us a copy of his book Szachy wojenne 1939-1945 War chess (Ostrów Wielkopolski, 2013). Richly illustrated with games, photographs and documents, the historical narrative is remarkably detailed. The work is a 299-page soft-cover publication in Polish, with a summary in English on pages 273-277.

A sample page, although one of the lighter ones: 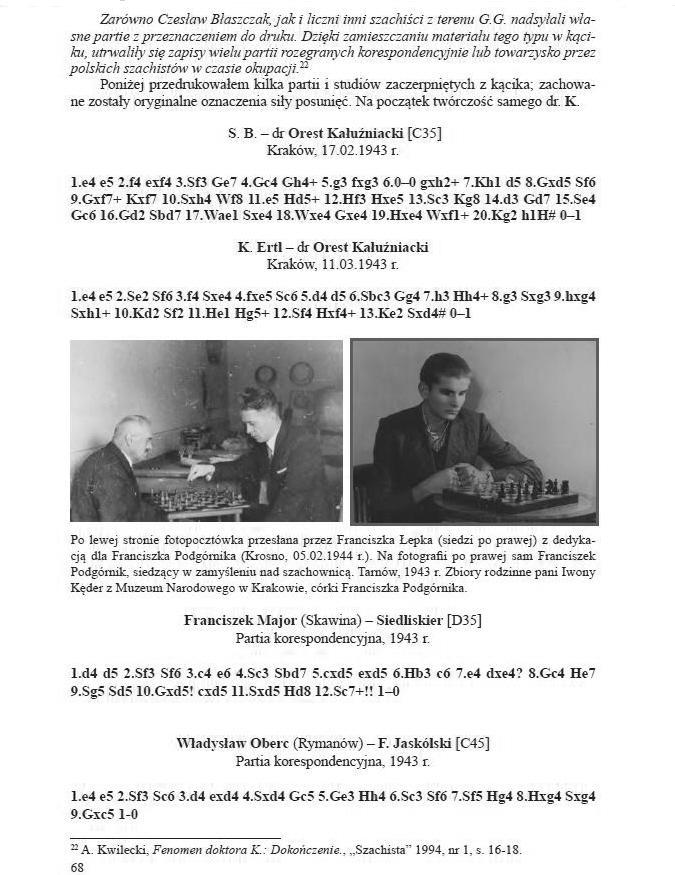 Mr Dudziński has authorized us to reproduce here a number of photographs, and the scans provided by him are accompanied below by the book’s captions. 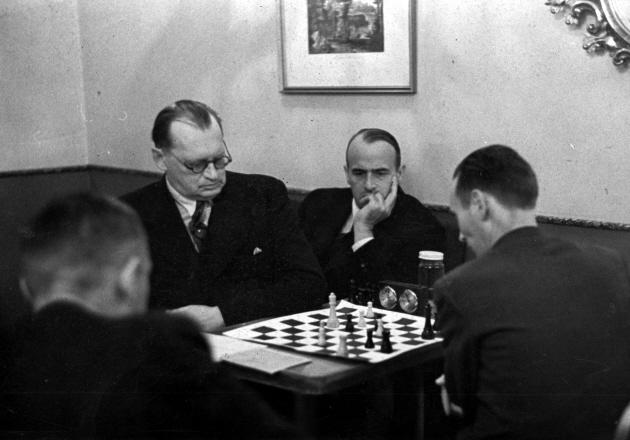 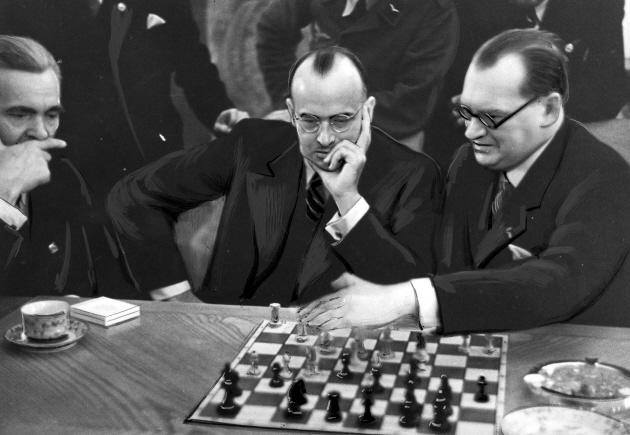 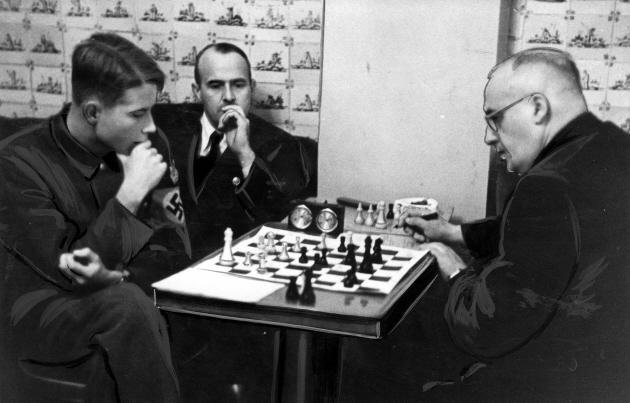 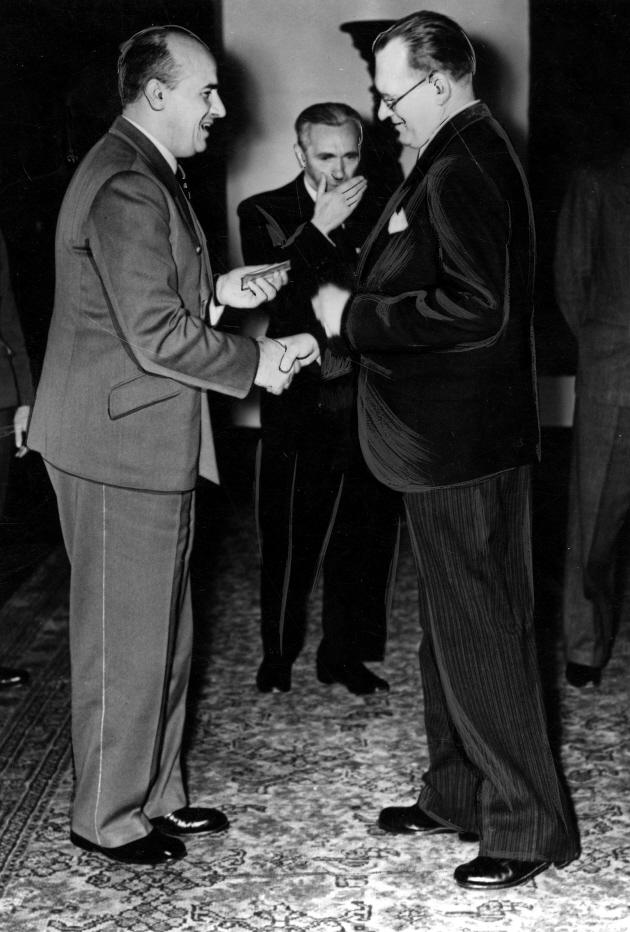 Only a limited number of copies of this exceptional (and, we understand, inexpensive) book are available, and we shall be pleased to forward to the author any messages from readers who wish to buy it.

Wolfgang Franz (Oberdiebach, Germany) notes that the photographs in C.N. 8204 can be viewed, together with many others, at the Polish Zbiory NAC on-line website, e.g. by searching for Szachowe or Alechin.

From page 3 of the 1 January 1941 issue of Deutsche Schachblätter: