‘Monsieur Gibaud asks us to correct a mistake made by the author of Curious Chess Facts [Irving Chernev] and quoted by us last month. He never lost any tournament game in four moves. Searching his memory he recalls a “skittles” he once played against Lazard, a game of the most light-hearted variety, in which, his attention momentarily distracted by the arrival of his friend Muffang, he played a move which allowed a combination of this genre – but certainly not four moves after the commencement of the game. Rumour, he said, must have woven strange tales about this game, coupling it perhaps with the theoretical illustration Znosko-Borovsky gives on page 24 of his Comment on devient brillant joueur d’échecs (Paris, 1935).’ The text appeared in the ‘Colonial and Foreign News’ section, of which the Editor was apparently P.W. Sergeant (see page 396 of the October 1922 BCM). When the game was published on page 20 of volume two of Lehrbuch der Schachtaktik by Alexander Koblenz (East Berlin, 1972) the opening was identified as the Budapest Gambit, and White was named as ‘Gibaut’. 
Avital Pilpel (New York, NY, USA) draws our attention to the following passage from pages 10-11 of Cannibals in the Cafeteria by Stephen Pile (New York, 1988):

‘Gibaud has been overthrown. Ever since 1924 this French chess master has been revered for achieving defeat in only four moves. A Monsieur Labard [sic] played the walk-on part in this great scene.

But in the 1959 US Open Championship somebody called Masefield was a useful foil, moving around the white pieces in a match that enabled the immortal Trinka to be checkmated in three moves: 1 P-K4 P-KKt4; 2 Kt-QB3 P-KB4; 3 Q-R5 mate.’

We have yet to find particulars of the other game in a contemporary source, but ‘Masefield v Trinka, Omaha, 1959’ is often referred to in modern sources. Even so, the homepage of a certain Pakistani chess site has the following item under the inapt heading ‘Chess Facts’:

‘You might not going to believe it but this game is happened to be a shortest game in Chess history. The match was played between first British GM title Comins Mansfield (for Chess composition) and Trinks in the 1961 U.S.A. Open Chess Championship.

If a ‘sic’ were to be inserted after each instance of inaccuracy or illiteracy in the above quotation there would, by our count, be eight of them.

In C.N. 3295 we mentioned having found no particulars about the alleged 1959 game in any contemporary source, and that remains the case today. As regards the players’ names, however, it may be noted that different versions appeared on page 30 of Das Spiel der Könige by Alfred Diel (Bamberg, 1983):

See too the entry ‘Shortest games’ in the Factfinder.


We should like to know when Amédée Gibaud died. It is a point on which the reference books are silent.

Gibaud won the French championship several times. Page 338 of the November 1946 issue of Le monde des échecs (which gave his forename as Aimé) stated that he had retired from the French postal service and was living in Nice.

The above was written in 2003, since when many further details have been found. See, in particular, the Héritage des échecs français website.


C.N. 7156 gave this photograph of Gibaud (right) with Alekhine, from the November 1928 issue of L’Echiquier: 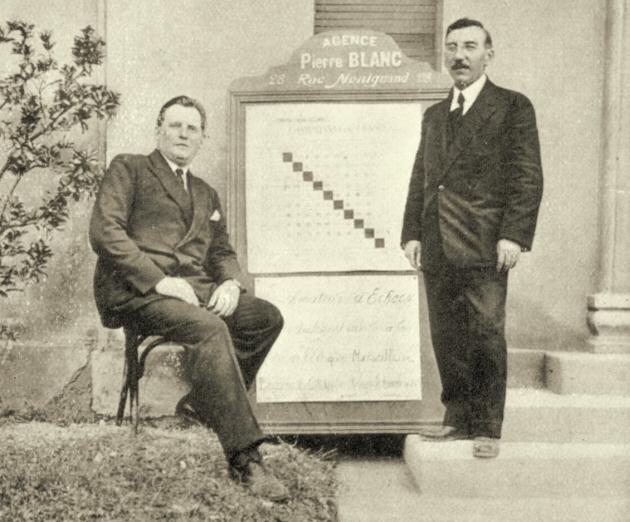