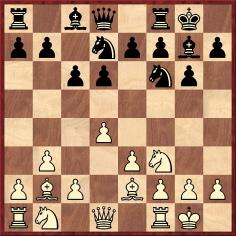 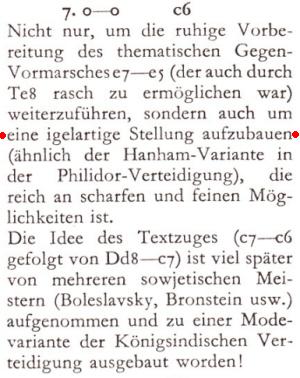 We add below the note as it appeared on page 59 of Tartacover vous parle (Paris, 1953): 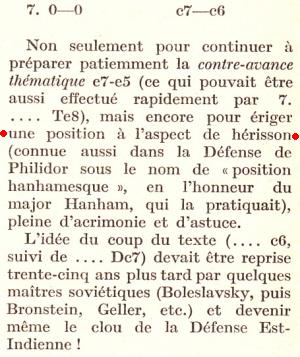 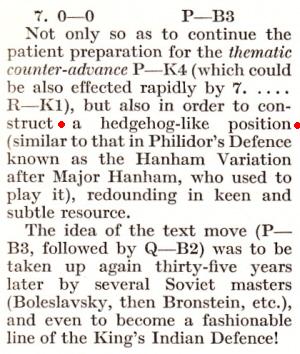 Mr Salter asks whether this is the first reference in chess literature to a ‘hedgehog’ formation. Citations from readers will be appreciated. 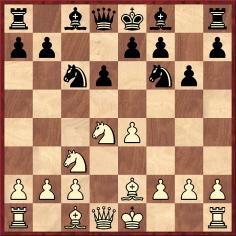 ‘The Dragon Variation was very popular in those days and was in fact a favorite weapon of my own. I had for example won some impressive games in the Hauptturnier at Barmen in 1905.

Some 15 years later, with the rise of the Hypermodern School, the less obvious merits of the Scheveningen Variation began to be appreciated. This line, which calls for 6...e6, is characterized by the position of the black pawns at e6 and d6 and gives the player of the black pieces a kind of “hedgehog” position.’

‘In this, the normal position of the Steinitz Defence, Black occupies a “hedgehog” formation. All his minor pieces are in a state of expectant defence. White has now a large choice of good continuations, but none likely to upset Black’s defensive formation.’

‘[Pipiringos] got himself into a weird position resembling one of Steinitz’s hedgehog defenses, and quickly lost.’ 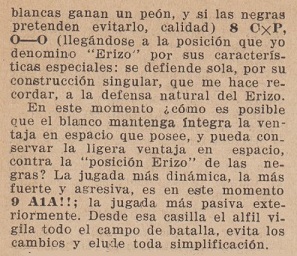 The text was in an extract from a lecture on openings which Tartakower gave in Buenos Aires on 3 March 1931, as specified by the magazine in its heading on the previous page: 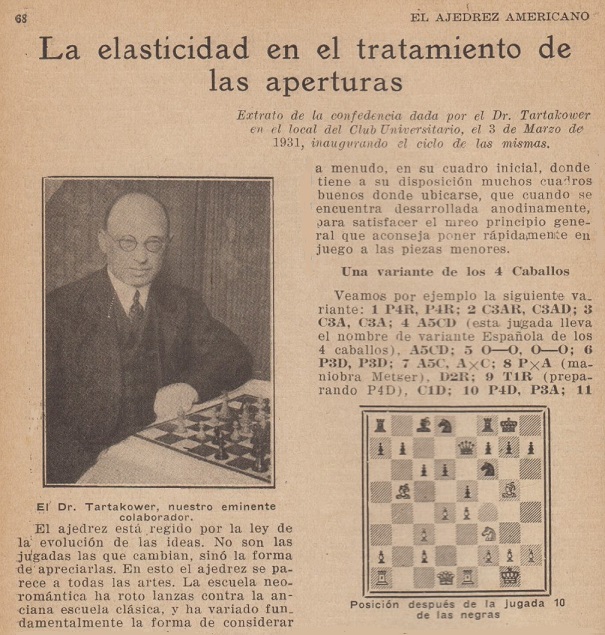 ‘Bobby Fischer’s contributions include countless opening innovations and original middlegame plans. His pioneering use of the King’s Indian Attack is an example of how he seamlessly combined the two, and his wins against Ivkov (Second Piatigorsky Cup, 1966), Myagmarsuren (Sousse Interzonal, 1967) and Panno (Buenos Aires, 1970) are still model games half a century later.

Fischer is also one of the founding fathers of the Hedgehog. Ulf Andersson and Ljubomir Ljubojević played it extensively in the 1970s and 1980s and are credited with being its creators, but, as will be shown below, this is not completely true.

García Soruco v Fischer, Havana Olympiad, 1966 is credited as the game where the plan …Kh8, ...Rg8, …g5, …Rg6 and …Rag8 was first seen, but this may not be so. On pages 18-20 of the 1974 book Morphy Chess Masterpieces by Fred Reinfeld and Andrew Soltis the latter points out that Fischer may have been influenced by Paulsen v Morphy, New York, 1857, where Black played ...Kh8, ...Rg8 and ...g5. The pawn structure is different, but there is some similarity. Here is how the Hedgehog may have developed.

Both players were without sight of the board in the game, which was played on 10 October 1857 and is on page 30 of Hans Renette’s monograph on Paulsen. 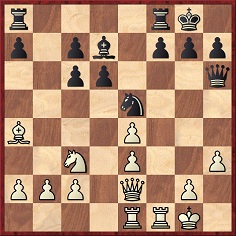 The next game, considered the first example of the plan being executed in its entirety, comes from the 1966 Olympiad in Havana (Julio García Soruco v Bobby Fischer): 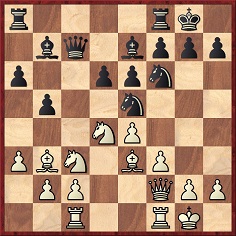 Passive moves (a3, f3 and Rac1) by the Bolivian Olympiad team member are just the encouragement that Fischer needs to implement what Kasparov calls the “compressed spring” strategy.

17...d5 is a good move, but it reduces the tension. The text gives White more problems to solve. 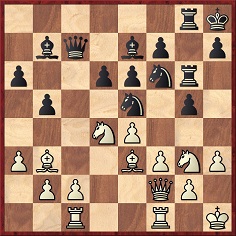 18...d5 was again quite good for Black, but Fischer adheres to his strategy and is soon rewarded.

This simply loses, but it is hard to suggest a satisfactory defense.

Fischer’s first try with the variation worked like a charm, his opponent allowing him to do everything he wanted. The second time around, matters were not so simple. The 19-year-old Ulf Andersson was not yet a world-class grandmaster, but he was a strong player (rated 2480 on the July 1970 FIDE rating list, which placed him in the top 100 players in the world at the time).

This game between Fischer and Andersson was played in a hotel room in Siegen on 26 September 1970, the day after the Olympiad ended. Fischer was paid a fee by a Swedish newspaper, which published the game-score a move a day over several months.

This was not the first time that Fischer opened with 1 b3, as he had played it a few months before against Tukmakov in Buenos Aires. Fischer stated that 1 e4! is "best by test" (C.N. 4423), but he had a much better career record with 1 b3 – a perfect 4-0 score, in fact. All the games were played against quality opponents (Mecking and Filip were the two others) and were interesting fights in which Fischer introduced new ideas.

Andersson supports his e-pawn with the text, but step-by-step he is drifting into a passive position where he will soon have no constructive plan.

“The exclamation points are not awarded to this move, but rather to Fischer’s entire plan. It is the originality of the plan that merits praise. Later, this plan became popular in Hedgehog positions, where (with colors reversed) White’s c-pawn is on his fourth rank.” (Alex Fishbein on page 48 of his 1996 book on Fischer.) 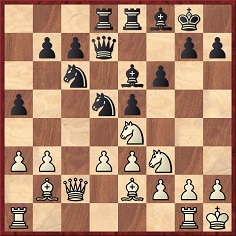 This unforced weakening increases the strength of g4-g5.

“A remarkable attacking construction! The original source, with reversed colours, was the game Soruco v Fischer (Havana Olympiad, 1966).” (Kasparov on page 353 of his 2004 book on Fischer in the Predecessors series.) 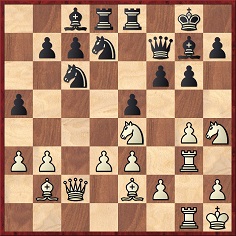 “An amazing paradox: with the board full of pieces, practically without coming into contact with the enemy army and not straying beyond his own half of the board, White has imperceptibly achieved a winning position.” (Kasparov on page 353 of his 2004 book on Fischer in the Predecessors series.) 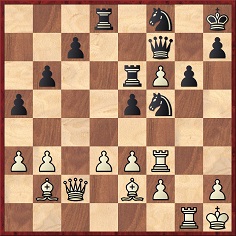 “This game made such a great impression on Ulf Andersson that in the 1970s the talented Swedish grandmaster, who is well known for his skill in defence, became one of the main ideologists of the ‘hedgehog’ set-up and the ‘compressed spring’ method when playing Black. That is how the chess revolution of the 1970s began.” (Kasparov on page 354 of his 2004 book on Fischer in the Predecessors series.)

Here, just a day after the game with Andersson, Fischer has the opportunity to use his plan once again, as Black against Michels in the simultaneous display in Münster referred to in C.N. 11543. White’s fate is similar to what would have happened to García Soruco if he had not self-destructed with 19 Nxe6.

11 f4 is necessary as the text is too passive.

White has no constructive plan. 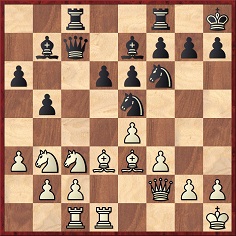 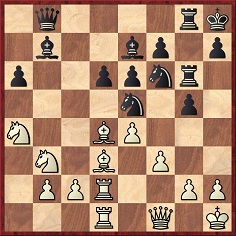 In view of these games, should Fischer be considered the father of the Hedgehog? He certainly discovered the key setup with …Kh8, …Rg8, …g5, …Rg6 and ...Rag8. We also know that he was very conscious of Black’s ability to break with …d5 (or when to avoid it). What we do not know for sure, since none of his opponents had their c-pawn on c4 or …c5, is whether he was aware of the …b5 break played independently or in conjunction with …d5. It does seem likely. Less clear is the maneuver …Bf8-e7-d8-c7, a now-standard Hedgehog line, which came into practice only after Fischer had stopped playing post-1972. All in all, it seems fairest to give credit to Fischer as the originator and to Andersson and Ljubojević for refining it.’