The Chesswriting Practices of Christian Hesse

‘All in all Akiba Rubinstein played 1985 tournament games in his life, of which 1763 had rook endgames.’

The book’s author/compiler does not believe in using primary sources or in specifying his secondary sources for particular items (many positions and other material are taken from Chess Notes, in exchange for a one-line mention of our website in a list on page 427). Since The Joys of Chess gives no source for the Rubinstein statistics, we shall do so. The sentence was written by Irving Chernev on the inside front cover of the July 1952 Chess Review, was reproduced on page 270 of his book The Chess Companion (New York, 1968) and was an obvious joke. 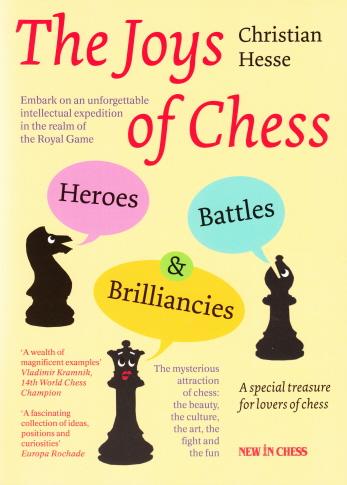 Regarding The Joys of Chess by Christian Hesse (Alkmaar, 2011), C.N. 7083 observed that ‘many positions and other material are taken from Chess Notes, in exchange for a one-line mention of our website in a list on page 427)’.

An article by Hesse posted at ChessBase on 13 September 2013 highlights his inability even to copy accurately. An example is his position ‘N.N.-Caro, Berlin 1898’. Below is part of C.N. 3096, posted on the Internet in 2003 and given on page 12 of Chess Facts and Fables. It concerns our research into queen sacrifices on g6 or g3 (as set out in The Fox Enigma): 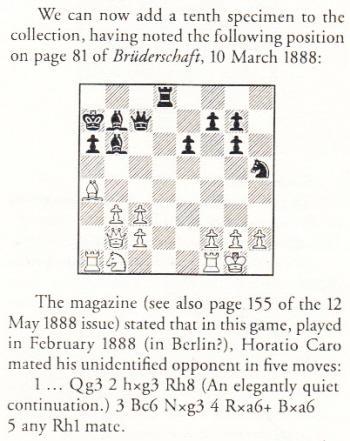 Hesse availed himself of this position on page 175 of Expeditionen in die Schachwelt (Nettetal, 2006), on page 183 of the English edition, The Joys of Chess, and in his ChessBase article, without a word of attribution. All three times he stated categorically that the venue was Berlin (our cautious question mark was dispensed with) and he was ten years out with the date of the game, putting ‘1898’. His neglect to mention a source reduced his chances of realizing the 1888/1898 discrepancy during the seven years since he first published in his work an inaccurate, simplified version of ours.

Naturally, other writers and researchers are also the victims of Hesse’s unconscionable approach. His ChessBase article blunders spectacularly by attributing to G.A. MacDonnell a game played more than a decade after his death.


In 1899 George Alcock MacDonnell died, a fact which did not prevent Christian Hesse from stating in a ChessBase article that MacDonnell lost a game to Amos Burn in 1910 (see C.N. 8276). On page 183 of The Joys of Chess (Alkmaar, 2011) Hesse had been vaguer and therefore closer to the truth, White being identified only as ‘MacDonald’. He was Edmund E. Macdonald. (See, for instance, our feature article Macdonald v Burn, Liverpool, 1910.)

In 1900 Wilhelm/William Steinitz died, a fact which did not prevent Christian Hesse from quoting a remark by Steinitz about a mate-in-two problem by Pulitzer which, according to Hesse, was dated 1907. (See page 166 of The Joys of Chess.) Hesse miscopied from our presentation of the Pulitzer problem on page 11 of A Chess Omnibus (also included in Steinitz Stuck and Capa Caught). We gave Steinitz’s comments on the composition as quoted on page 60 of the Chess Player’s Scrap Book, April 1907, and that sufficed for Hesse to assume that the problem was composed in 1907.

‘Naturally, other writers and researchers are also the victims of Hesse’s unconscionable approach.’

‘It’s about time Mr Christian Hesse (ChessBase, books) wrote something he couldn’t first have read in my work.’

An article which Hesse somehow managed to have posted by ChessBase on 13 September 2013 still contains, even today, the blunders pointed out at the time in C.N. 8276, including the following:


C.N. items have drawn attention to Christian Hesse’s inaccurate plundering of our work and his refusal to correct his gaffes. We have given chapter and verse and shown that another victim who has denounced Hesse’s conduct is the excellent Dutch writer Tim Krabbé.

A new book by Hesse has just appeared, Damenopfer (Munich, 2015). In the bibliography on pages 259-264 each entry comprises bare identification of the author, title and publication details. Or, rather, each entry with just two exceptions. In both those cases, on pages 262 and 264 respectively, Hesse has added an identically-worded, unsubstantiated allegation of inaccuracy:

‘Christian Hesse copies his own errors too. From page 233 of his book Expeditionen in die Schachwelt (Nettetal, 2006): 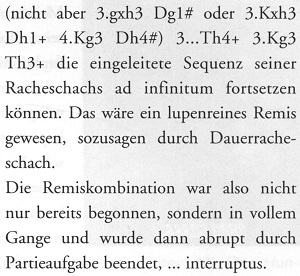 Another position, but also wrong, and again the wrong venue and wrong winner.

On page 5 of the 4/2007 issue of KARL Hesse’s mistakes were pointed out by Richard Forster:

Thus Hesse replied that he would not use the position again in such a way. Richard Forster’s corrections were incorporated (without acknowledgement, and without the revised text being made logical) on pages 242-243 of the English edition of Expeditionen in die Schachwelt – The Joys of Chess (Alkmaar, 2011) – but below is what appeared on pages 78-79 of Hesse’s book Damenopfer (Munich, 2015): 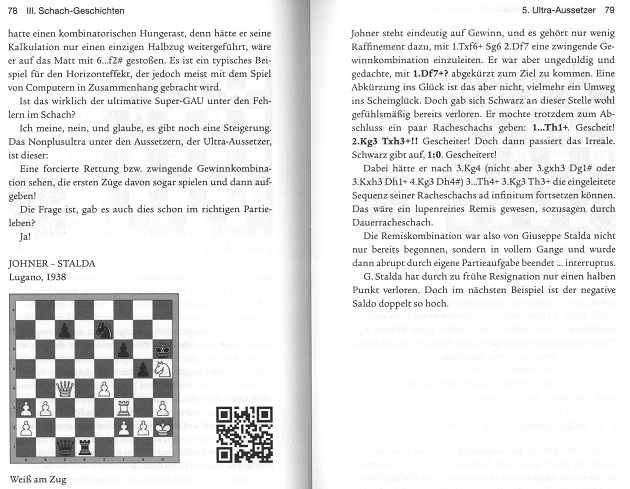 
With the atrocious Christian Hesse, chess knowledge moves backwards. Giving scant credit (i.e. nothing specific), he copies endlessly from secondary sources, and even when he manages to copy accurately he removes the information on primary sources which the victim of his copying had specified. See, for instance, his coverage (The Joys of Chess, page 240) of what Golombek ‘once’ wrote about a spite check in connection with the game Phillips v Fazekas, and compare that with our earlier, more detailed coverage of the matter in C.N. 3182 (The Spite Check in Chess).