We offer a digest of Chess Notes items about Sherlock Holmes.

His famous remark ‘Amberley excelled at chess – one mark, Watson, of a scheming mind’ appeared in ‘The Adventure of the Retired Colourman’ in The Case Book of Sherlock Holmes (London, 1927). That source is now well known to chess enthusiasts, but was not always so. On page 34 of his anthology Chess Pieces (London, 1949), Norman Knight related that, uncertain of which Holmes story had included the quotation, he had written a letter of enquiry to The Observer; no fewer than 82 replies were received (‘which shows that the field of Holmesian scholarship is better tilled than he [Knight] had imagined’).

The other prominent connection between the detective and chess is Raymond Smullyan’s book The Chess Mysteries of Sherlock Holmes (London, 1980).

Imitations and parodies of the Holmes stories are not infrequent, and three good ones with a chess connection come to mind. The most recent is ‘The Case of the Mental Detective’ by William R. Hartston, on pages 25-30 of his book Soft Pawn (London, 1980).

Finally, pages 289-293 of the October 1918 BCM had ‘A Game at Chess’ by ‘E.A.G.’ (who may have been Edwin A. Greig). This yarn involved Mr Shercock Bones, Whatson and Professor Moratorium. The sleuth declared to his friend, ‘I shall play Moratorium tonight – I shall not lose the game – and I shall make more than 16 sacrifices’, and he fulfilled these undertakings as follows:

An appropriate conclusion to this item is the front cover of a French edition of an Arthur Conan Doyle collection, published in 1948, Un échec de Sherlock Holmes:


Rick Kennedy (Columbus, OH, USA) reports that he has written several Sherlock Holmes stories with a chess theme. Two of them were published in Chess Life, as follows:


Mark N. Taylor (Mt Berry, GA, USA) reports that a catalogue by Kester Svendsen lists a short story entitled ‘The Mystery of the Missing Pawn: An Adventure of Herlock Shomes’ as having been published on pages 33-34 of the British Chess Bulletin, January 1911.

We should like to hear from any reader who can tell us more about the Bulletin, a very scarce publication. According to the entry in Douglas Betts’ Annotated Bibliography, it was ‘a monthly chess journal at a popular price’ edited by H.T. Dickinson and ran for four issues (October 1910 to January 1911).


What material about Sherlock Holmes and Harry N. Pillsbury was published in 1964? Some puzzling complications arise from that apparently straightforward question.

Page 23 of An Annotated International Bibliography of Chess Articles in Non-Chess English Language Periodicals 1783-1977 by Paul Richman (Old Bridge, 1978) had the following entry:

Nor have we found anything by Wincor, or about chess, in the Baker Street Journal of the time indicated by Richman.

Even so, the following appeared on page 144 of Grandmasters of Chess by Harold C. Schonberg (Philadelphia and New York, 1973):

‘Hastings, 1895 then disbanded. But everybody was talking about Pillsbury. There was amazement then that an unknown should take first prize in so powerful a field. In later years theories were to be advanced. The Spring 1964 issue of the Baker Street Journal had a learned article “proving” that the great Sherlock Holmes impersonated Pillsbury at the tournament. But this theory is not generally accepted in chess circles.’

We have found that a Holmes/Pillsbury article, entitled ‘Yet Another Case of Identity’, was printed not in the US publication the Baker Street Journal but on pages 115-118 of the Spring 1964 issue of a  London-based publication, the Sherlock Holmes Journal.

Surprisingly, the author was not Richard Wincor but Harold Schonberg himself:

At present it is unclear to us on what grounds both Richman and Schonberg mentioned the Baker Street Journal, and why Wincor was named by Richman as the author of a 1964 piece on Holmes/Pillsbury entitled ‘The Sherlock Holmes Opening’. Does it really exist, in addition to Schonberg’s article of the same year on the same theme?


Eli Hiltch (Ramat Gan, Israel) has drawn our attention to an on-line cumulated index of the Baker Street Journal, which enables us to clarify the Pillsbury matter discussed in C.N. 5257.

A story entitled ‘The Sherlock Holmes Opening’ by Richard Wincor was published on pages 92-94 of the June 1965 issue of the Baker Street Journal.

The item had nothing to do with Pillsbury but was a short story arising from ‘the case of Vigor, the Hammersmith wonder, mentioned in “The Sussex Vampire”’. Holmes took a board in a simultaneous display by the five-year-old prodigy Anton Vigorsky. All 100 opponents had the white pieces, and Vigorsky decided to put toxic Kafka Powder on their kings and queens, expecting the pieces to be chewed nervously during play. However, ‘absent-minded, like most geniuses’, he administered the poison to his own black pieces. And so: ‘Tonight it was Vigorsky who grew nervous. Sherlock Holmes was a match for him; the lad nibbled and chewed, then collapsed.’ Or, more graphically: ‘Vigor was turning green as he fell head first against his own battle forces, nose on the king’s rook.’

The article concluded with this game:

The magazine (page 128) described Richard Wincor as ‘a practicing attorney and an expert on copyright law’. He later wrote Baroque Chess Openings (Boston, 1972).

In that same issue of the Baker Street Journal (pages 83-85) there was an article by Harold C. Schonberg (on Holmes and music, not chess), reprinted from the New York Times of 7 March 1965, and the fact that he had items published in both the Baker Street Journal and the Sherlock Holmes Journal in 1964-65 may explain why he confused the two publications when writing about Pillsbury in his book Grandmasters of Chess (C.N. 5257).

‘Dear Dr Watson: Can you solve this?

I played a game and arrived at this position. To my surprise it developed to be a sound two-mover. (This is a clue.)’

Watson believed that he had found the solution, only to be contradicted by Sherlock Holmes.

The composition was featured in an article ‘Dr Watson Solves a Problem’ by P.G. Keeney on page 8 of the January 1945 issue of the Chess Correspondent. Almost impossible to summarize, it is given here in full.

A further Sherlock Holmes article, ‘The Adventure of the Strange Sound’ by Alain C. White, was published on pages 229-230 of the May 1914 Chess Amateur, and was based on this problem by Murray Marble:

There may, at first sight, appear simply to be a pair of mates in two moves: 1 Kf6 and 1 e3. However, Michael McDowell (Westcliff-on-sea, England) writes:

The story was reprinted on pages 28-31 of Flights of Fancy in the Chess World by A.C. White (Leeds, 1919), with the solution on page 143. Acknowledgement for research information: the Library of the British Chess Problem Society.’


Mark N. Taylor (Mt Berry, GA, USA) points out the dust-jacket of a the novel The Star of India by Carole Buggé (Gordonsville, 1998):


Wanted: unusual inscriptions by chess authors in their books. An example from our collection is in The Chess Mysteries of Sherlock Holmes by Raymond Smullyan (New York, 1979): 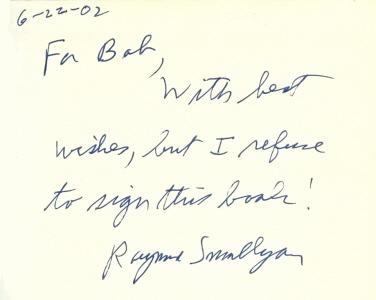 This position was featured in a Sherlock Holmes vignette ‘Chess in Fiction’ by Hotspur on pages 15-16 of the January 1964 BCM. In a cliff-ledge showdown, Moriarty played 36...fxg2 (‘Time to resign, I think, Mr Holmes.’), but ‘Holmes nonchalantly produced his hypodermic syringe and applied a shot of his favourite drug Morphy-A’ and played 37 Qe2+ Rxe2 38 Nb4+ cxb4 39 Ra5+. Moriarty then ‘made the only move open to him – over the cliff – board, men and Moriarty’. As Holmes later reflected, in the diagrammed position Black could have played 36...Re1+ 37 Qxe1 Bxb2+, with mate in two more moves.


Addition on 1 March 2009: Pages 169-171 of the June 1966 BCM presented an article by Irwin L. Stein entitled ‘The Case of the Curious Colonel’. Its thesis was that Sherlock Holmes played at Monte Carlo, 1903 under the name Colonel Moreau.


Michael Clapham (Ipswich, England) provides the short story ‘The Mystery of the Missing Pawn: An Adventure of Herlock Shomes’ by H.T. Dickinson from pages 33-34 of the January 1911 issue of the British Chess Bulletin:


‘The Adventure of the Black Bishop’ by Mark Coggins was published on pages 253-286 of the anthology Masters of Technique edited by H. Goldowsky (Newton Highlands, 2010).

We add that The Puzzling Adventure of the Misunderstood Monkey Business was reproduced on pages 4-8 of the January 1916 American Chess Bulletin. A further Holmes story by Bukofzer, entitled Christmas Fun, appeared on pages 242-243 of the December 1934 Chess Review.


A short story on page 94 of the December 1927 Chess Amateur was ‘The Missing King: an Absurdity’. It was described as ‘A New Story of Sheerluck Omnes, by his friend Dr Potson, kindly transcribed for the “C.A.” by W.E.L., London.’


Pages 101-123 of Chess Chatter & Chaff by P.H. Williams (Stroud, 1909) have the short story ‘The Missing Motor-Car. An unauthorized and preposterous adventure of Sherlaw Combs’.

‘The Sherlock Holmes parody was written years ago, but I was not quick enough to submit it to a real live editor, and thus the opportunity of novelty went by. Though there is nothing new in the idea of cariacaturing [sic] Conan Doyle’s famous hero, yet perhaps my farcical nonsense may not be without point.’ Below is an English translation supplied by Dan Scoones (Victoria, BC, Canada):

What is known about Conan Doyle and chess?

At the British Newspaper Archive Chris Eve (Victoria, BC, Canada) has found a number of items about Conan Doyle and chess:

The Morning Post chess column of 25 October 1897, page 2, listed Conan Doyle among the participants in a chess dinner: 
Some chess books try to fabricate an air of cultivation by inserting quotes, however irrelevant, in chapter headings. From page 114 of Playing Computer Chess by Al Lawrence and Lev Alburt (New York, 1998): 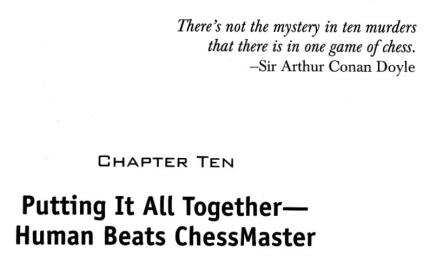 The quote has nothing to do with Sir Arthur Conan Doyle but comes from the short story The Two Bottles of Relish by Lord Dunsany, as mentioned in our feature article on him.