The Homes of Chess Masters


In former times, when prowlers, snoopers and stalkers were less in evidence, chess publications often published the home addresses of masters and other figures. Indeed, lengthy lists were a regular feature of Ranneforths Schachkalender and below, taken at random, is page 133 of the 1925 volume:

Over the years we have build up, as a research tool, an ‘address book’ featuring some of the more prominent old-timers. See Where Did They Live?

Many illustrations have also appeared in Chess Notes. For example, in C.N. 4307 Michael Negele (Wuppertal, Germany) gave a photograph which he had taken of the building in Copenhagen where Nimzowitsch lived (Øster Farimagsgade 11, second floor):

The picture below (C.N. 5000) appeared on page 52 of the March 1924 American Chess Bulletin with the caption ‘Capablanca’s Bungalow Near Havana’.

Text on the reverse side: ‘Famed patio and garden located at 417 Royal Street to which thousands of tourists are attracted annually. The building which once housed the Louisiana Bank established in 1804, and which later became the home of Paul Morphy, world-famous chess champion, is now used as a restaurant.’

‘This building located at 417 Royal Street, first housed the Louisiana Bank, established in 1804 through the influence of Thomas Jefferson, later it became the home of Paul Morphy, world-famous chess champion. It is now a fashionable restaurant. Your host, Col. Ad Given Davis.’

Below (from C.N. 3849) is a photograph of the house which was published on page 34 of the 1926 booklet Life of Paul Morphy in the Vieux Carré of New-Orleans and Abroad by Regina Morphy-Voitier:

Finally regarding Morphy, C.N. 3855 showed another postcard from our collection:

The reverse of the card reads:

‘Patio, Brennan’s French Restaurant, 417 Royal Street, New Orleans. This handsome structure and patio, one of the Vieux Carré’s most interesting, was erected during the twilight of Spanish rule over Louisiana by Don José Faurie, a wealthy merchant. Later it housed The Louisiana Bank, first banking institution in the Louisiana Territory. Later still, it was the home of Paul Morphy, world-famous chess champion.’

In common with his predecessor as world champion, Emanuel Lasker had many homes in the course of his life. One of them has the distinction of being the subject of a book, Das Lasker-Haus in Thyrow (Berlin, 2005):

‘I am the custodian of the Ulster Chess Union archives, and amongst them is a letter dated 15 July 1938 from Alekhine to the Union’s secretary, William Minnis, indicating his willingness to give a simultaneous exhibition in Belfast. The headed notepaper has the address Le Château St Aubin-le-Cauf (Seine Inférieure), as well as a telephone number, St Aubin-le-Cauf No. 7.’

Hassan Roger Sadeghi (Lausanne, Switzerland) drew attention to information available on-line about the , which has rooms named after various chess pieces, as well as a ‘chambre Alekine’ [sic].

In C.N. 4345 we reported, with a further link, that Alekhine’s château was owned by Agnès and Jean-Pierre Bosselin. Their daughter, Véronique Perrin-Bosselin, wrote to us as follows:

‘We are very interested in the illustrious former owner of our property and in providing information to our guests about its history. My grandfather acquired the castle from Madame Alekhine after the War. It had been completely looted during the evacuation and was then used by the German Army, which converted it into a hospital. A few years ago my parents transformed the château into guest rooms and reception halls, and all the bedrooms naturally have names with a chess theme. In addition to rooms named after chess pieces (rook, knight, king and queen), there is an Alekhine Room.

The château would be available for any kind of special event related to chess.’


The above website also includes this historical note on the Châtellenie:

We are grateful to Véronique Perrin for permission to reproduce from her website the plaque which refers to Alekhine’s residence in the château, and for sending us a close-up picture: Hassan Roger Sadeghi (Lausanne, Switzerland) sends this photograph, taken on 7 October 2007, of the Hôtel Mazagran in Paris. As noted in our feature article Where Did They Live?, Tartakower was a resident there already in the 1920s, and it was also his address at the end of his life.

‘Johann Josef Kmoch was born on 25 July 1894 at Herbststraße 41, Vienna and was baptized on 5 August 1894 in the parish church of Neulerchenfeld. His parents were Wenzel Kmoch, a maker of leather fancies (Ledergalanteriearbeiter) from Prague, and his wife Karolina, née Moser. Wenzel Kmoch died on 4 May 1951. Hans Kmoch was a true “Ottakring boy”. His younger brother was Ladislaus Kmoch (1897-1971), a cartoonist of local renown who created the popular cartoon character “Tobias Seicherl”. Hans Kmoch’s nephew was the local historian Manfred Kmoch (1925-79), and his great-nephew Ladislaus Kmoch still lives in Vienna today.’

A photograph of Herbststraße 41 taken by our correspondent in July 2019: 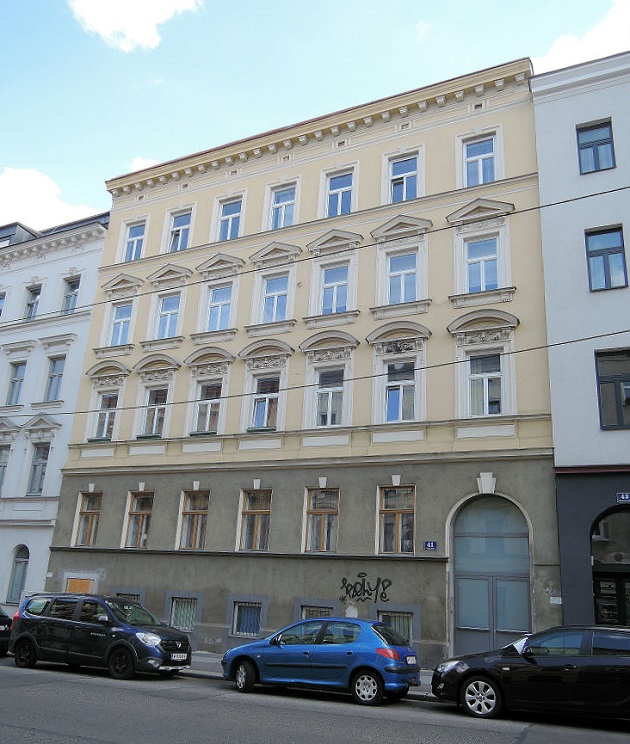