The topic of hypnosis was broached in C.N. 974, but not in the context of chess. That item quoted from pages 174-175 of The Compleat Draughts Player by Irving Chernev (Oxford, 1981):

‘Draughts playing by hypnosis is the latest achievement of an exponent of the latter science. A lad was hypnotized and persuaded that he was Wyllie, the celebrated draughts player. He was then matched against a first-class opponent. Each move was made without hesitation and the game was played in the presence of numerous spectators.’

Chernev then gave the score of the game, as printed in the Occult Review, and he mentioned that the text was quoted from the Draughts World, 1910.


As regards hypnosis and chess, C.N. 995 pointed out an article by Lev Alburt and Harvey Simon in CHESS, August 1983, pages 63-68. Our item also quoted, courtesy of John Roycroft (London), a passage from pages 124-125 of Jeu d’échecs et sciences humaines by Jacques Dextreit and Norbert Engel (Paris, 1981):

The book specified that the translation, by Raymond Lhoste, of the article in 64 had been published on page 12 of the April 1976 Europe Echecs. Subsequently (in C.N. 1083) William Hartston (Cambridge, England) mentioned that a book which he co-authored with P.C. Wason, The Psychology of Chess (London, 1983), gave an account of the Tal experiment (see pages 100-101).


Also in C.N. 995 John Roycroft drew attention to this ‘Pself-Psych’ advertisement on page 50 of the April 1985 Chess Life:


Pages 170-171 of Kings, Commoners and Knaves quoted the following by Tarrasch in his book on the St Petersburg, 1914 tournament (page 168 of the German original and page 238 of the English translation):

‘Lasker appears to exert a certain hypnotic influence upon many opponents, for it is difficult to explain how warriors accustomed to victory, when they have come into the advantage against him, suddenly play the game for a loss.’

This was the fifth game of the Lasker v Janowsky world championship match (Berlin, 1910).

‘Apparently he believed that his performance in the match was being influenced by some hypnotic power brought about by Alekhine. In spite of being assured by Nimzowitsch that this was impossible, Bogoljubow insisted that it could be done.’

‘Bogoljubow, it seems, believes in the art of subjecting one person to the will of another by some extraordinary power. Can such an art exist? Decidedly no. If it did exist and someone set himself up as a teacher of this art, he would have the whole world for his customers and yet derive no advantage therefrom, because his pupils would hypnotize him and then suggest to him the return of the tuition fee.’

This comes from page 11 of Lasker’s book Games Played in the Return Match for the World’s Championship (London, 1935), and for the context we reproduce below the full page:

‘Reliance on psychology has been both an asset and a handicap for Alekhine. The legitimate use of psychology in master play is to maneuver the opponent into positions where he feels ill at ease, which do not “lie right” for him, as the German puts it. Alekhine has been able to apply this principle with consummate skill on a number of occasions – the match with Capablanca is the most notable. At other times, however, chiefly when he was at the height of his fame, around 1932-1934, Alekhine has exaggerated the human factor out of all proportion. In one French tournament he even went so far as to make a serious attempt to win by hypnosis.’

No information has come to light about what exactly is supposed to have happened at that ‘one French tournament’? The reader’s thirst for hard facts is also left unassuaged by a remark of Fine’s about Alekhine on page 151 of The World’s Great Chess Games (New York, 1951):

‘For a while he worked on a theory of winning by hypnotism.’

Another article to which we have drawn attention is ‘Chess and Hypnosis by Lenny Cavallaro on pages 57-58 of the June 1998 Chess Life. The present overview concludes with two nineteenth-century snippets, the first of which comes from page 325 of the August 1890 BCM:

‘This time, Nimzowitsch said that “Alekhine has hypnotized all of us”. But this was not original, since both before and after Alekhine all world champions “have hypnotized and will hypnotize”.’


Michael Clapham (Ipswich, England) adds the case of Romark, who was discussed by Harry Golombek on pages 95-96 of Fischer v Spassky (London, 1973). Golombek quoted the following ‘from what I wrote at the time’:

‘Romark, Newcastle’s own Ron Markham, has challenged Bobby Fischer and Boris Spassky to play a consultation game against him at the end of the match and this for a stake of £125,000. Fischer and Spassky are asked to put up £62,500 each as their stake. So confident is Romark of winning that he is putting up £25,000 himself, the remainder being provided by his backers and associates. More, he is prepared to play blindfold against them.

... The reader, if as ill-informed as I was, might now ask who is Romark, what is he? Here are some facts provided by his publicity agents. At present he is based in Durban. At an anti-smoking rally in Newcastle last year he cured 2,000 people of smoking. This year, in Durban, before an audience of doctors, he hung [sic] himself for four minutes, was officially pronounced dead, and then, presumably, recovered. Romark says he is an average chessplayer. He would appear to be a more than average hypnotic medium.’

Golombek’s original article, ‘High drama in Reykjavik’, was written in Iceland during the world championship match and appeared on page 11 of The Times, 19 August 1972. Before coming on to Romark, Golombek indulged in much booksy waffle, contriving to mention Corneille, Agatha Christie and The Mousetrap, Brian Rix’s farces, Racine, Mozart, The Caretaker and Lord of the Flies. He also gave Spassky’s win in the 11th match-game, with brief notes. From the Introduction by Kenneth Harkness to How Chess Games are Won by Samuel Reshevsky (New York and London, 1962):

‘Reshevsky’s will power is so strong that he almost seems to hypnotize his opponents.’ 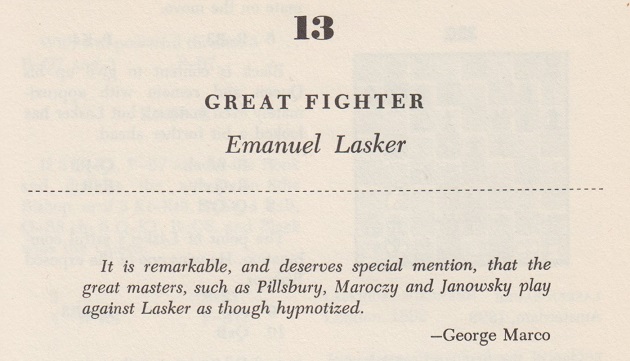 Chernev included Georg Marco’s observation in a number of books, having featured it as the ‘thought for the month’ on the inside front cover of the November 1954 Chess Review.

No source was ever offered, but below is Marco’s presentation of Janowsky v Lasker, Paris, 1900 on pages 149-150 of the July 1900 Wiener Schachzeitung: 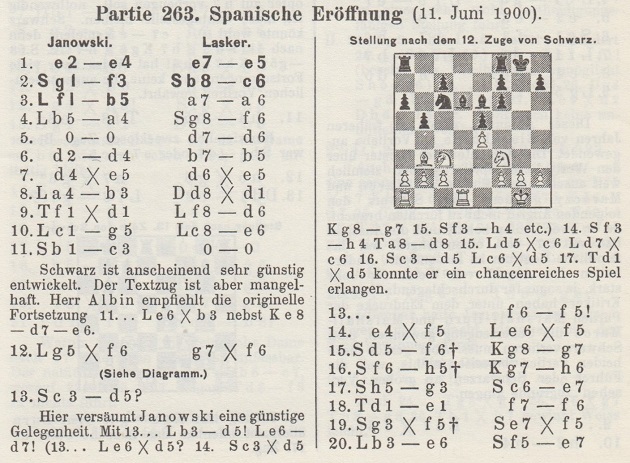 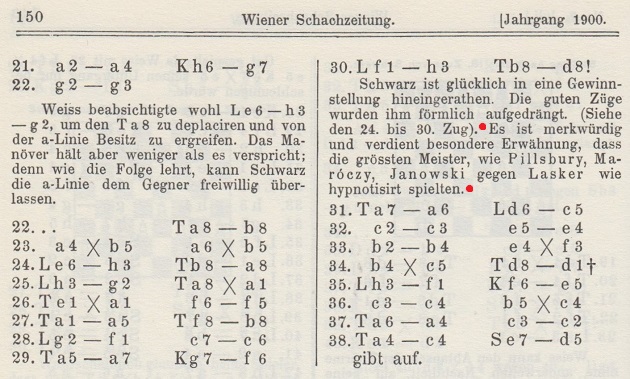 Around the same time, Miron James Hazeltine also referred to hypnosis in connection with Lasker and the Paris tournament, on page 398 of the New York Clipper, 30 June 1900: 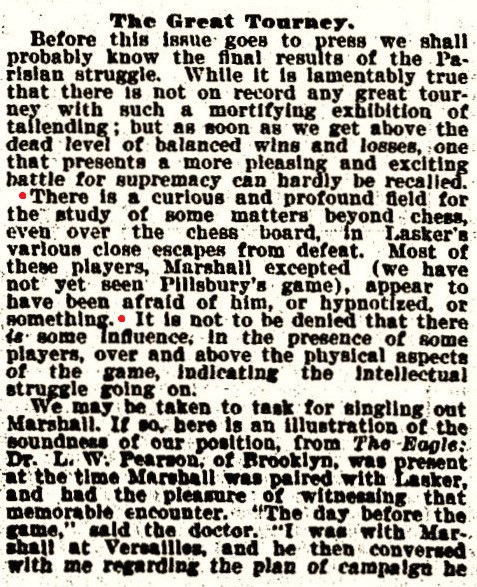 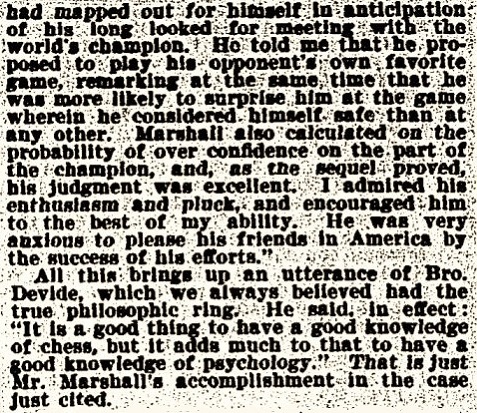