As shown in our feature article on Chess (Basics, Laws and Terms) by B.K. Chaturvedi (Chandigarh, 2001) copied extensively from Chess Made Easy by C.J.S. Purdy and G. Koshnitsky. But now comes a rebondissement: is it possible that the (dire) Indian volume was itself subsequently the victim of plagiarism? Below, on the left, is a passage from page 6 of the Chaturvedi book, alongside the text on page 8 of A Guide To Chess ‘Edited and Revised by Philip Robar’ (New Delhi, 2002):

The next paragraph in both books (pages 7 and 9 respectively) is a particularly bumpy read:

Among other examples of ‘similarities’ are the books’ concluding glossaries, but is it a plain case of plagiarism by the Robar volume? We feel that matters are far from simple. For instance, the imprint page of the Robar book states, however implausibly, ‘XIVth Edition 2002’; if there have truly been 13 previous editions of A Guide To Chess, most, if not all, of them would pre-date the 2001 Chaturvedi book. But who is Philip Robar? And what exactly was ‘edited and revised’ by him for the Guide?

A further consideration is that his name is not on the cover but only on the title page:

Finally for now, an additional mystery concerns the book’s spine: it names the author as ‘Dr C.P. Mithal’.


Regarding A Guide To Chess by ‘Philip Robar’, published by Pankaj Books, New Delhi, the company has a line-up of chess volumes whose authorship is ascribed to that same mysterious person. By way of example, we briefly look at one of them here, Techniques of End Game in Chess (New Delhi, 2002):

Different typefaces and notations are used in the book, and of necessity because 90 pages have been lifted, unascribed, from Chess endings for the practical player by L. Pachman (London, 1983) and about 100 pages have been stolen from Practical Chess Endgames by D. Hooper (London, 1968).

Sample pages are shown below:

It will be noted that the Robar book has amended the chapter endings, with a misspelling both times. Everything in Techniques of End Game in Chess from page 49 to the end (page 240, which chops off Pachman’s analysis in mid-flow) is by either Pachman or Hooper.

Not surprisingly, the other chess productions of Pankaj Books have also been put together, without attribution, from previous writers’ work, but does the chess world care? 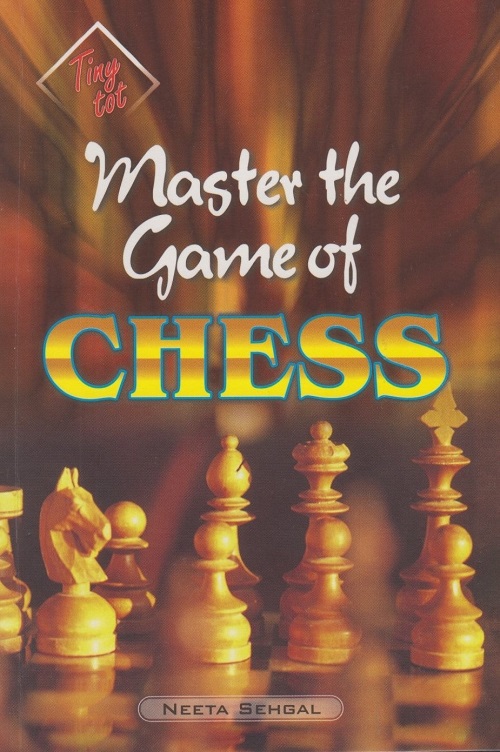 Anybody who places chess material on the Internet runs the risk of having it stolen, and a grotesque case has just come to our attention: Master the Game of Chess by Neeta Sehgal (Delhi, 2005 and 2006). 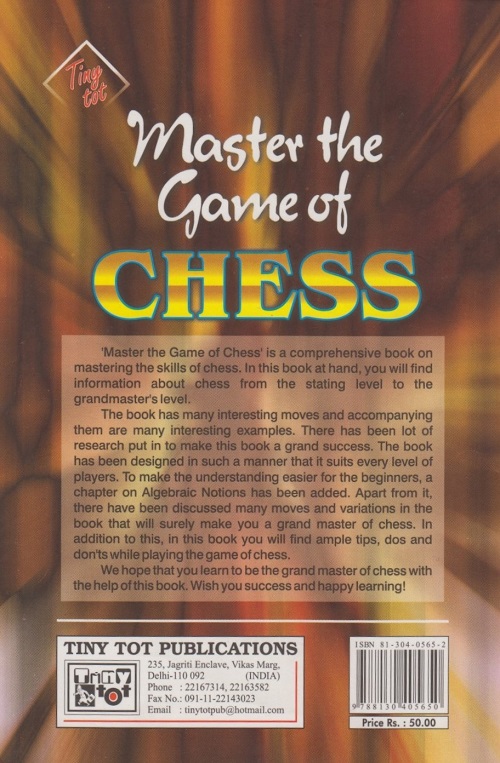 The illiterate back-cover blurb makes startling promises (the book ‘will surely make you a grand master of chess’) and proclaims: ‘There has been lot of research put in to make this book a grand success.’ The imprint page seeks to protect the intellectual property rights of that lot of research: 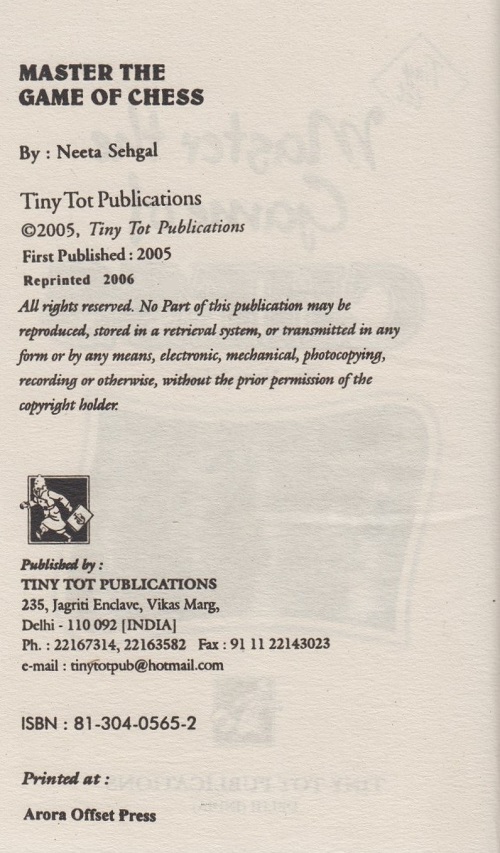 A Google search demonstrates that the entire 160-page book is a crude patchwork of material lifted from Internet sites without attribution. Three pages chosen randomly: 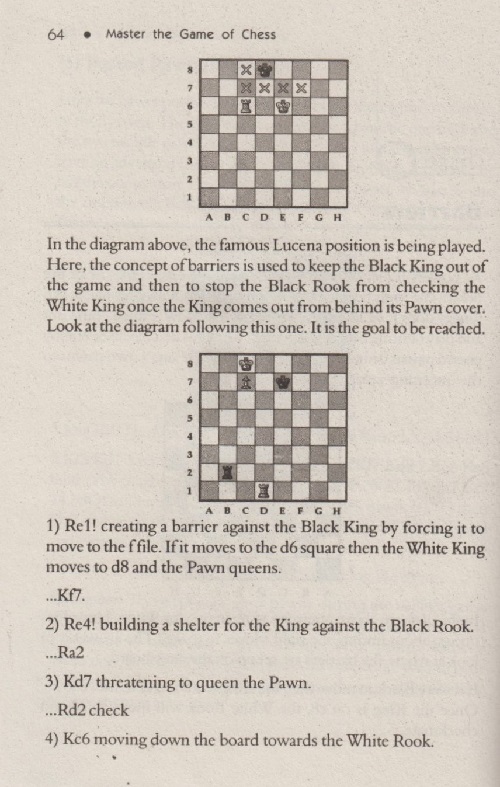 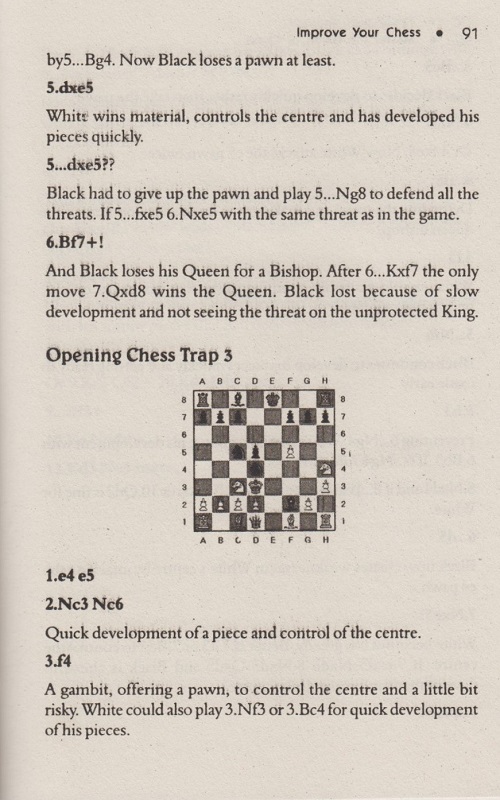 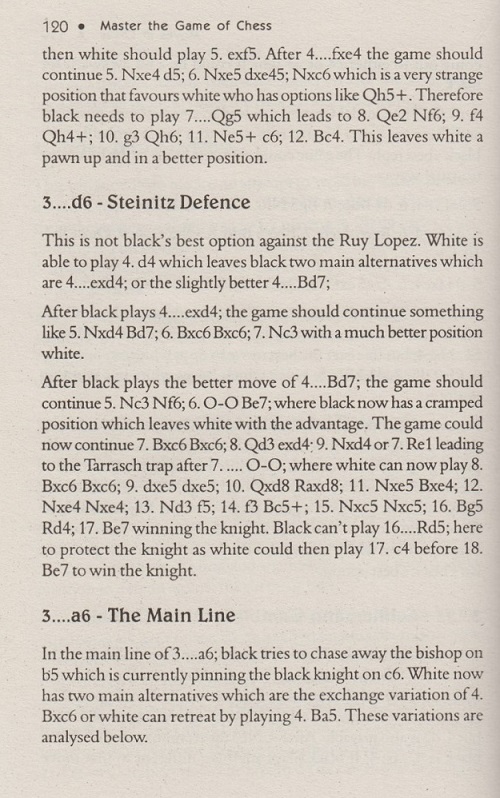 Is there any chance of an explanation from the publisher? No response has ever been received concerning the many cases documented in the feature articles An Indian Copying Mystery, Copying and A Publishing Scandal. Our correspondent also noted that an on-line vendor was offering a book with the same title and from the same publisher but with authorship ascribed to Philip Robar, who is mentioned in An Indian Copying Mystery (see above).

Mr Taylor’s particular attention was drawn to a passage on page 105:

‘Sometimes the player making the sealed move (see page 111) can do something unexpected; then that move should be made quickly and confidently and the ensuing moves followed up in a barrage.

I was on the receiving end of this technique in the 1957 British Championship against R.G. Wade, when I adjourned with a good position and expecting to win and take a clear tournament lead. But the pressures of being blitzed with surprise moves after adjournment induced a losing blunder.’

Mr Taylor concluded that the game in question was Wade v Barden, Plymouth, 1957, and he has asked us to comment on a sample of seven full pages which he has kindly forwarded. They include these two: We can say that all seven pages are copied, in full, from Play Better Chess by Leonard Barden (London, 1980). The two shown above are from, respectively, pages 143 and 58.