Jaffe and his Primer

‘But consider the case of Charles Jaffe: just when was he born?

On page 3 of the same booklet Gaige noted:

‘… the field of chess history comes well strewn with pitfalls – such as giving 1883 as the year for Charles Jaffe’s birth because Chess Review in 1933 picked up a report on a 50th birthday party for Charles Jaffee (a man with no relation to chess) and grafted that onto Charles Jaffe.’

C.N. 797 quoted a brief passage from Jaffe’s Chess Primer (New York, 1937), but a more detailed scrutiny of that spectacularly awful book is overdue.

It opened with an unsigned ‘Biography’, reproduced below with our comments in square brackets:

‘Charles Jaffe was born in Dubrovna, State of Mogilev on the Dneiper, Russia in 1879. While he attended the Russian and Hebrew schools, he displayed unmistakable signs of native chess talent.

At the age of 17 he came to America. He worked as a weaver in the silk mills of New York, New Jersey, and Pennsylvania until he reached the 31st year of his life. In 1910 he became prominent in chess circles both as a player and writer. At the First National American Chess Tournament in 1911 he shared third prize with Oscar Chajes, one-half point behind Capablanca [sic – Marshall won the tournament ahead of the Cuban]. In the same year he won the brilliancy prize [sic - one of 12 brilliancy prizes] and master title [sic – he finished joint bottom (equal 23rd)] at Carlsbaad [sic]. In 1913 at the Second National American Chess Tournament, he won the third prize defeating Capablanca, Janovski [sic], Chajes, Kupchik; but drawing with Marshall who was then US champion. In 1915 he won the New York State Championship [sic - Kupchik won]. He won matches against J. Ohrbach, champion of Paris [sic - presumably Arnold Aurbach - see La Stratégie, October 1911, page 372], Jacques Mieses, champion of Germany [sic], and Oscar Chajes, Western States champion. He has an even record against Jose Capablanca, winning two [sic] and losing two [sic]. In single games he has defeated such eminent players as Dr Emanuel Lasker, Frank J. Marshall, D. Janowski, J. Showalter and a host of others.

Charles Jaffe’s career has been both remarkable and tragic. At the very height of his fame his progress was intercepted by Jose Capablanca. At the Havana Tournament of 1913 Mr Capablanca stated to the press that since Jaffe had come to Cuba for the sole purpose of helping Marshall win, he would never again play in a tournament where Jaffe was entered as a contestant. It is certainly deplorable that Messrs Cassel and Helms, the American chess correspondents, not only believed these charges but also aided Capablanca by successfully keeping Jaffe out of all those American Tournaments in which they had influence. It might be noted that the great Dr Emanuel Lasker was driven from the US by very much the same tactics. He was barred from the New York Sextet Master Tournament of 1927.

Charles Jaffe’s knowledge of the game is unsurpassed by anyone. As an expert in the openings there is no one in the world who is his superior. In this field he has made many useful and ingenious contributions. The book is timely and necessary, for even the great masters will find new and unorthodox things of value.’

The following page of Jaffe’s Chess Primer had a Foreword by Reshevsky. It too emphasized Jaffe’s alleged accomplishments:

‘Charles Jaffe remains today unquestionably one of the world’s leading authorities on openings. As a chess analyst there are few to equal him. He has met on an even footing and played with a marked measure of success against such players as Dr Emanuel Lasker, José Capablanca, Frank Marshall, Pillsbury and a host of other famous players.’ [Details are unavailable regarding Pillsbury, although C.N. 2791 gave the conclusion of a drawn simultaneous game between the two players.]

Then came an Introduction by Sigmund Miller which also sang Jaffe’s praises. To quote its conclusion:

‘In this book special consideration has been placed on the openings. A player who has not only mastered the openings but understands the direction and inherent value of these forms of play, is able, perforce, to play the middle and end games well. The logic of these openings are [sic] particularly stressed in such manner that the reader will follow the action logically and clearly. Advanced students will undoubtedly note that other moves than the accepted text moves are given. Since Charles Jaffe is considered the first expert on openings, these deviations should be given due consideration. These unorthodox moves have proven unquestionably superior to the others.

This book has a message for every chess player.’

By 1937 Jaffe was in his final phase, but even when at his peak he was, though unquestionably a strong player, hardly one of the world’s leading authorities on openings. In any case, Jaffe’s professed expertise on the openings did not shine through in the Primer itself. For example, page 22 had a list of ‘Guides for Openings’, ten points of less-than-perfect clarity such as the following:

‘5. Never strike from the center with your pawns, always to the center. The exception is only when you can protect the capturing pawn.’

‘This is a sister defense to the French. Black’s accomplishment in this defense is as little as in the other. At best Black can turn this into a King’s Fianchetto, but with a resulting weakness on the king’s side.’

That was followed by, in bold type, the ‘Sicilian Defense (Jaffe Variation)’: 1 e4 c5 2 Nf3 e6 3 d4 cxd4 4 Nxd4 Nf6. ‘This constitutes the Jaffe Variation, but, nevertheless, if White plays properly he has a good game.’ Jaffe neglected to mention that 4…Nf6 had been known for decades, having been played, for instance, several times by Anderssen in his 1861 match against Kolisch.

On page 51 the Queen’s Gambit Accepted was discarded in a few lines. 2…dxc4 received a question mark and one cursory, tumbledown sentence: ‘This is striking from the center inasmuch as he cannot hold this gain it is bad on general principles, as we shall see.’ Page 56 referred briefly to the ‘Queen’s Gambit-Declined Indian Defense’, which was Jaffe’s name for 1 d4 Nf6 2 c4 g6.

Most of the remainder of the book consisted of a chapter entitled ‘Ten Famous Games’, lightly annotated (‘… we will attempt to illustrate the finer and more complicated mechanism that composes the middle game with an eye towards the opening’.) The first was Edward Lasker’s spectacular miniature against Sir George Thomas (Dutch Defence; 11 Qxh7+), except that Jaffe made Lasker the loser, against Alekhine, affirming that it had been played ‘in the World’s Fair in Chicago with live figures. The combination in this game is so brilliant, so rare that it is difficult to believe that even a master could have worked it out in actual play.’

Game 3 was a Jaffe win over Paul Johner (‘Powell Jonner’), while Game 4 was Jaffe v Spielmann (also spelt ‘Spielman’), the introduction to which repeated the misleading remark that it won ‘the’ brilliancy prize at a tournament in Carlsbad (still ‘Carlsbaad’ in Jaffe’s spelling). Game 5 was a Jaffe win against Emanuel Lasker, which, he boasted, marked his debut ‘into the professional chess world’. It was an ‘off-hand game’ (from 1904) according to pages 116-117 of The Collected Games of Emanuel Lasker by K. Whyld, which had Black resigning after 44 Qd3, in contrast to the ‘32 Qd3 Resigns’ in Jaffe’s version.

In Game 6 Jaffe claimed to have won a miniature, as Black, against ‘Farne’ (i.e. Hans Fahrni) in a ‘Jaffe Defense’ played ‘in the Carlsbaad Tournament’:

Game 7 could hardly be called famous:

Game 9 was a Marshall brilliancy against ‘Elfen’ Bogoljubow, while Game 10 was an Alekhine loss (the second match game against Euwe in 1935) in which, after 1 d4 Nf6 2 c4, Jaffe gave 2…g6 a question mark.

Jaffe’s Chess Primer, all 95 roomy pages of it, is seen mercifully seldom nowadays, and a publisher may be tempted to produce a reprint of what is, after all, a classic pageant of bumptiousness, incompetence and falsehood. The Primer would certainly fit in well with the chess list of Cardoza Publishing.


We have pointed out the difficulties in establishing firm biographical information about Charles Jaffe, and especially his date of birth. Now, Olimpiu G. Urcan (Singapore) has found the document below, dated 10 September 1937, at the Ancestry.com website: 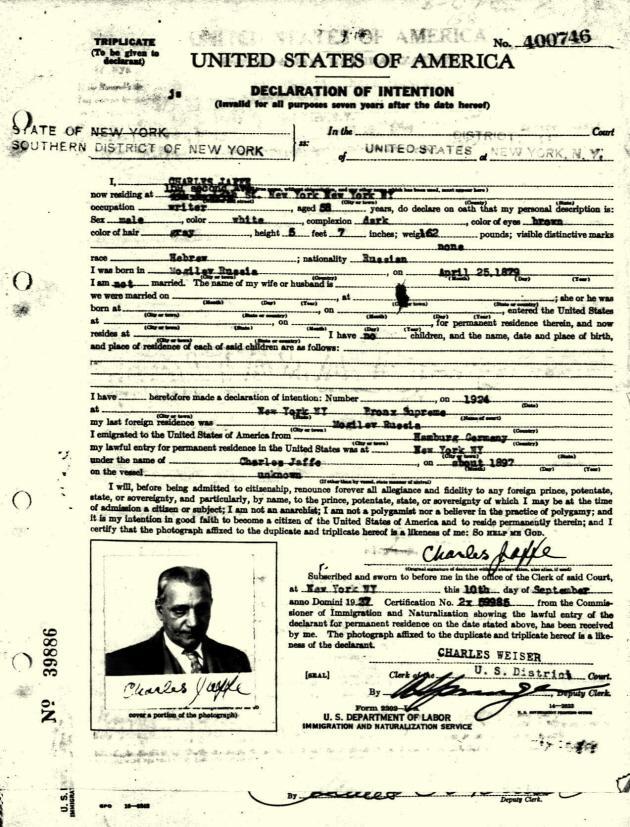 The picture of Jaffe in the Declaration of Intention may be compared with this detail from the group photograph (Chicago, 1937) given in C.N. 7351:

With respect to the signatures on the form, below is the inscription in our copy of Jaffe’s Chess Primer: 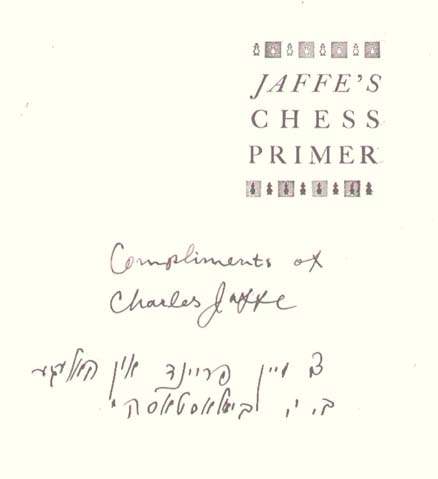 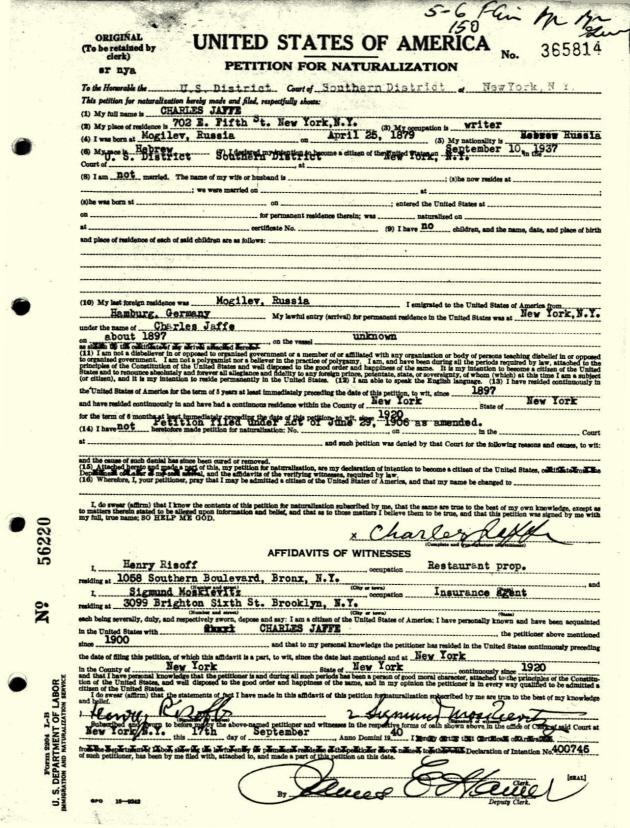 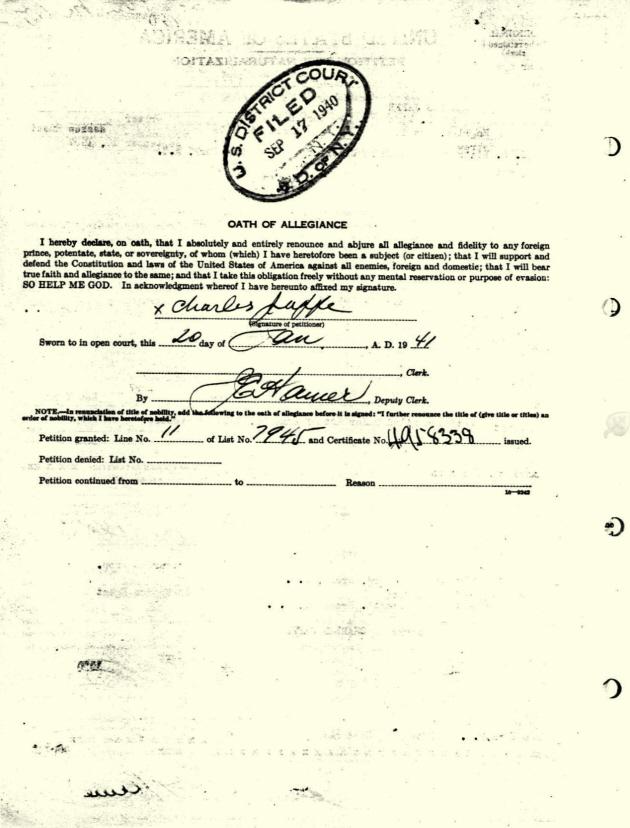 John Blackstone (Las Vegas, NV, USA) has drawn attention to this photograph on page 9 of section three of the New York Sun, 5 February 1911: 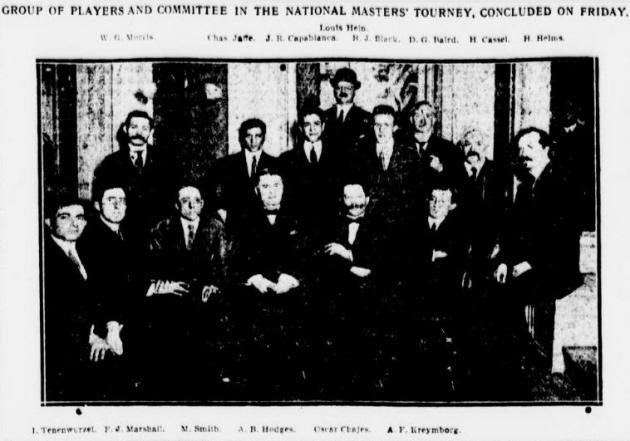 We should very much like to trace a copy of better quality.


A late photograph of Jaffe, seated next to Frank Marshall, was published on page 79 of the May 1940 Chess Review.


Photographs of Jaffe are scarce and usually of poor quality. Below, for instance, is page 204 of the September 1909 American Chess Bulletin: 
Ross Jackson (Raumati South, New Zealand) asks what is known about the claim on page 190 of The World of Chess by A. Saidy and N. Lessing (New York, 1974) that during the 1927 world championship match Jaffe sent Alekhine a cable which ‘contained an analysis of a variation of the Queen’s Gambit with a new move suggested by Jaffe, which Alekhine is thought to have adopted’.


Avital Pilpel (Haifa, Israel) informs us that Moshe Roytman has found on the online database of Jewish publications in the National Library of Israel that in 1906 Charles Jaffe launched a Yiddish-language chess periodical, דער אידישער שאך-זשורנאל (‘The Jewish Chess Journal’). The second page listed the contents:

2. Recommendations for the new journal from Em. Lasker and M. Ginsburg;

3. A biography of Professor Rice;

6. The opening: a brief analysis of two lines in the King’s Gambit;

7. Marshall v von Scheve (Rice Gambit game, with notes by The Field and by Jaffe);

8. The chess world. News and announcements. In particular, an obituary of Max Judd;

Noting the stamp of the Cleveland Public Library on the second page, we have obtained the Library’s permission to show the full issue here as a PDF file.