A Series of Books on Lasker

A book which immediately ranks as one of the finest in chess history has just been published: Emanuel Lasker Denker Weltenbürger Schachweltmeister edited by Richard Forster, Stefan Hansen and Michael Negele (Berlin, 2009).

A few statistics first. A beautiful hardback, it comprises 1,079 large pages with 700 games, 1,600 diagrams and over 500 illustrations. The contributors include Robert Hübner (a chapter of more than 160 pages deeply analysing Lasker’s early games) and Victor Korchnoi (annotations to three games played in the final phase of Lasker’s career). Other highlights are excellently-researched chapters on Lasker’s family and childhood, his writings, his work as a mathematician and philosopher, his involvement in the games Laska, Go and bridge and his problems and studies.

The contributions have been skilfully brought together to create a serene, harmonious entity, complete with a detailed bibliography, indexes and other requisites of high scholarship. As the reader turns the pages, the surprises are unending. Page 201 reproduces a letter of condolence from Albert Einstein to Lasker’s widow, Martha. A discovery presented on pages 1054-1055 is a 1956 university thesis by George G. Gallagher, Doctor Emanuel Lasker A Psychobiography:

Emanuel Lasker Denker Weltenbürger Schachweltmeister having only just been published, we have merely been dipping into it and would not presume to offer any kind of formal review. Instead, with the generous permission of the editors, the present article will whet the appetite of potential readers by offering a selection from the 500 or so illustrations. We begin with a photograph from page 54, showing Lasker at the board with Max Frankel, a founder member of the Manhattan Chess Club:

Among the documents which caught our eye, on pages 1007-1013, is a letter written by Lasker (Berlin, 4 October 1903) to Walter Penn Shipley. The extract below refers to a possible challenge by Tarrasch to a world championship match, and Lasker adds that if he wins that match he will ‘probably resign the title of champion which confers no rights of any sort but only exposes to challenges unrestrained by any condition’:

The photograph below, from page 1029, shows Lasker with Nimzowitsch during a tournament in Berlin in spring, 1928:

Another shot featuring Nimzowitsch (as well as Kmoch, Alekhine and Bogoljubow, during the 1934 world championship match) is on page 291:

The last photograph chosen for inclusion here comes from page 1040 and is dated 1936:

When browsing through the volume it is impossible not to derive both pleasure and pride from such a magnificent tribute being produced to one of the greatest chessplayers of all time. The present, relatively brief, pictorial feature cannot, even remotely, do justice to a book which will be treasured by anyone with an interest in our game’s history, including those with no knowledge of German. A beautiful 450-page hardback, entirely in English, it is the first volume in a trilogy adapted from, and expanding on, Emanuel Lasker Denker Weltenbürger Schachweltmeister edited by Richard Forster, Stefan Hansen and Michael Negele (Berlin, 2009).

The new book can be ordered direct from a webpage of Exzelsior Verlag, Berlin or by contacting the company by e-mail (info@exzelsior.de).

We are grateful to the Editors for permission to show here three photographs which they obtained from the collection of the late Lothar Schmid: 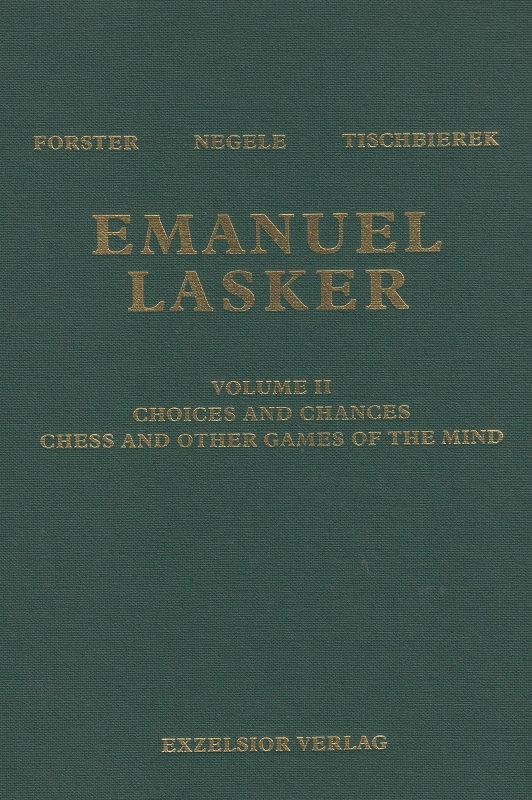 The publisher’s webpage presents an extract from this superb volume, as well as ordering details; the book will also be obtainable from McFarland & Company, Inc.

From the private archive of Christian Wohlfarth (Berlin) we reproduce with the Editors’ permission a photograph of Lasker playing Go which is on page 164 of volume two: 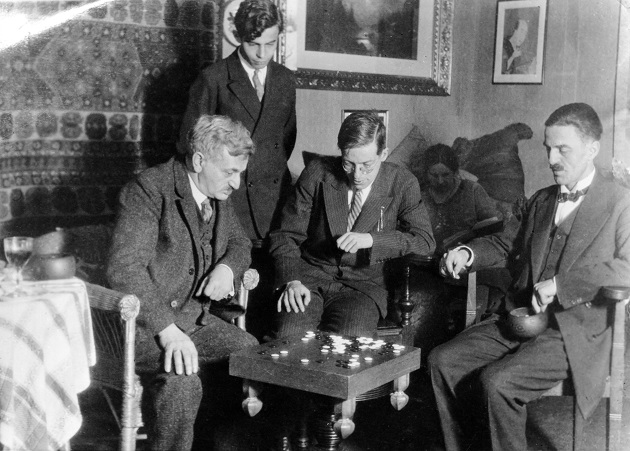 The caption states that Lasker’s opponent was Felix Dueball, at whose residence the picture was taken on 7 March 1930. His eldest son Fritz is standing, and the man seated in the centre is Kurt Rosenwald.

At the beginning of April 2022 Richard Forster produced a list of books and booklets on Emanuel Lasker.


Just received: the final volume in the Emanuel Lasker trilogy by Richard Forster, Michael Negele and Raj Tischbierek, published by Exzelsior Verlag, Berlin, with a Foreword by John Nunn.

Extracts are available on-line, and the book may be ordered direct from the publisher’s webpage, although some readers outside Europe may prefer to use the McFarland page.

In common with its predecessors, this third volume is of superlative quality.


Note: this article was previously entitled A Book on Lasker, having originally dealt only with the 2009 German volume.