Chess Enterprises have published Forty Years at the Top (‘John Curdo’s Chess Career’), edited by Bob Sanchez (Coraopolis, 1988) ... Game 95 (pages 89-90) is what ‘has to be the most amusing game I’ve ever played. It rates high on my list of swindles.’ The punctuation is Curdo’s.

Wolf annotated the game on pages 162-164 of the August 1923 Wiener Schachzeitung, the issue which announced his death. The son of the master Siegfried Reginald Wolf, he died on 2 August 1923 at the age of 23 from a fall in the Swiss mountains (Jungfrau). [See too C.N. 6352 below.] Page 338 of Bachmann’s Schachjahrbuch 1923 also credited to him the introduction of the Landstrasse Gambit (1 Nf3 d5 2 c4).

Regarding the first of these games, the move-order given by our correspondent is confirmed by various contemporary sources, but page 241 of Akiba Rubinstein: Uncrowned King by J. Donaldson and N. Minev stated that the game began 1 f4 f5 2 Nf3 e6 3 e4 d5 exf5 4 exf5 exf5. An alternative spelling often seen for White’s name is Freymann.


Under the title ‘The Sincerest Form of Flattery?’ John Donaldson wrote an article on pages 24-25 of Inside Chess, 3 May 1993 which began as follows:

‘Examples of plagiarism are not unknown in chess literature, but Raymond Keene has set a new standard for shamelessness in his recent work, The Complete Book of Gambits (Batsford, 1992). ... Unfortunately, Mr Keene has done nothing less than steal another man’s work and pass it off as his own.

A glance at pages 128-132 of his recent book, The Complete Book of Gambits, and a comparison with my two-part article on Lisitsin’s Gambit, which appeared in Inside Chess, Volume 4, Issue 3, pages 25-26, and Issue 4, page 26, early in 1991, reveals that not only did Mr Keene have nothing new to say about Lisitsin’s Gambit, he could hardly be bothered to change any of the wording or analysis from the articles that appeared in Inside Chess other than to truncate them a bit. What’s more, no mention of the original source was given in The Complete Book of Gambits, misleading the reader as to the originality of Mr Keene’s work.

Just how blatant was the plagiarism? Virtually every word and variation in the four and a half pages devoted to Lisitsin’s Gambit in Keene’s book was stolen.’


The earliest specimen of Lisitsin’s Gambit which we have noted:

Less than three months after playing the game, Wolf was dead, aged 23. His annotations were included in the Wiener Schachzeitung: 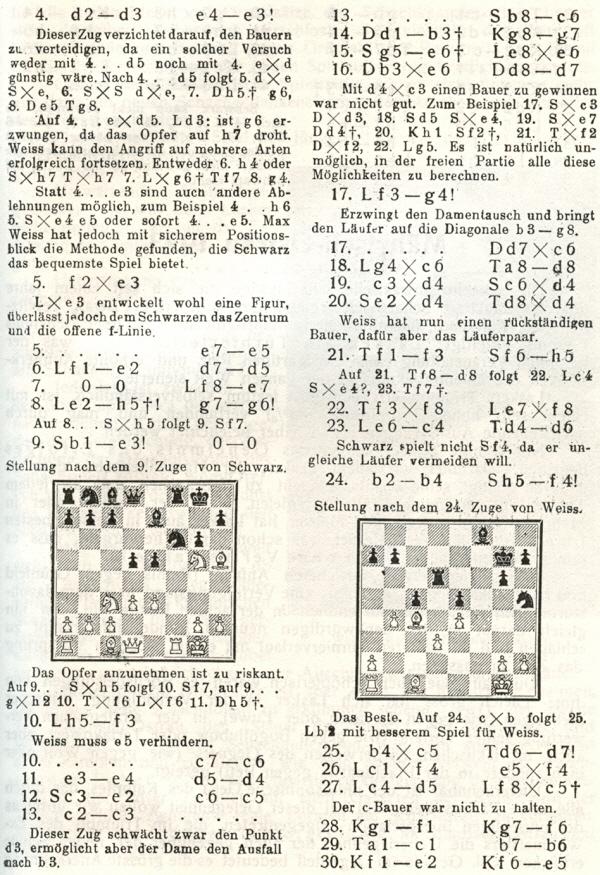