We present a selection of quotes and references on the role played by luck in the game of chess.


W. Steinitz on page 236 of the August 1886 International Chess Magazine:

‘Anderssen once said to me: “To win a tournament, a competitor must in the first place play well, but he should also have a good amount of luck.” I quite agree with that, but it naturally follows that there must be also ill luck in tournaments, of which many instances could be cited, notably that of Winawer, who, after having tied for first and second prizes in Vienna, and just a few weeks before he came out chief victor in Nuremberg, did not win in London a single prize out of eight (to include the special one for the best score against the prize-holders). All this would tend to show that, at least, a single tournament, especially one consisting of one round only, cannot be regarded as a test.’


‘The Chance Element in Chess’. A dialogue between ‘Smith’ and ‘Jones’ on pages 48-50 of Pierce Gambit, Chess Papers and Problems by James Pierce and W. Timbrell Pierce (London, 1888).


On pages 292-293 of the Nuremberg, 1896 tournament book Tarrasch discussed Lasker’s alleged luck in the event and produced a table to demonstrate the extent of the world champion’s (and other masters’) good fortune. The table was reproduced in a discussion of luck in chess on pages 300-301 of the October-November 1907 Wiener Schachzeitung.


‘Luck in Chess’ by J.D. Séguin on pages 504-505 of the American Chess Magazine, June 1899, reproduced from New Orleans Times-Democrat.


‘Chess a Game of Chance’. A brief feature on page 96 of Lasker’s Chess Magazine, December 1907, based on ‘chess aphorisms by Max Weiss in the journal of the Academic Chess Club of Munich, Germany’. The concluding quote was ‘unlucky in games, lucky in love’.


Georg Marco commented on luck in chess in a note after 49...Kh7 in his tournament book annotations to his game against Důras at Ostend, 1906. The following is the English translation by Thomas Harlin on page 558 of the December 1907 BCM:

‘And the game now resulted in a draw. But any unbiassed chess friend will have come to the conclusion that in a game of chess chance rules almost as often as in a game of roulette. Nor is there anything surprising in that; the probability that in a given critical position a chess master will select the best move (or, at least, a good move) may be put, even under the pressure of a time-limit, at 0.9. On the other hand, the probability that the correct moves, both for White and for Black, will be made 5, 10, 20, ... 50 times in succession will be the 10th, 20th, 40th, ... 100th successive power of 0.9. With the help of a table of logarithms, it is easy to show that the values of these powers diminish very rapidly, and the probability of always finding the correct move diminishes in a very alarming way. Now consider physical weakness; exhaustion after a protracted struggle; tendency to light-heartedness when the position is favourable; tendency to dejection when the position is critical, and it will be clear that absolute correctness is an ideal at which everybody aims, but which nobody attains, or ever will attain.’

Part of this text was quoted, with comment, on page 131 of the January 1908 issue of Lasker’s Chess Magazine.

‘It is said that in the game of chess luck plays no part whatever. That is a fallacy. In both the championship and the masters’ tournament at Ostend chance, or luck, has been a conspicuous factor, as I shall here proceed to prove ...

No such thing as luck in the game of chess. What nonsense. I have been myself unlucky enough to suffer from insomnia during the greater part of this tournament and, as it happens, am the direct cause of luck to others.’


An item from the British Deaf Times appeared on page 109 of January 1916 Chess Amateur:


Under the heading ‘A Dictum’ on page 3 of the October 1927 Chess Amateur:

‘“The popular idea that chess is a game into which luck does not enter at all is quite a fallacy.” – Sir George Thomas, the other day.’

The magazine returned to the subject on pages 94-95 of the December 1927 issue, quoting the views of W.S. Branch and T.R. Dawson, as well as on page 126-127 of the January 1928 edition (contributions from Georges Renaud, from the Editor of the Falkirk Herald and from John Keeble in that newspaper).


‘Luck in Chess’ on page 185 of the December 1928 American Chess Bulletin quoted John Keeble in the Falkirk Herald as now believing ‘more than ever he did, that there is more luck in chess than in any other game in existence’.


Pages 79-80 of the January 1930 Chess Amateur quoted H.J.R. Murray in the Cheltenham Chronicle. He began by commenting, ‘So far as the game is concerned, chance is excluded.’


Page 2 of the January 1930 American Chess Bulletin quoted Brian Harley in the Observer:

‘A contemporary has been discussing “luck” in chess. The question, it seems to me, is one of definition. Suppose one defines luck as pure chance, which cannot be humanly accounted for, either before or after the event concerned. Then there is no luck in the game of chess, for analysis can in every case eventually find a reason why a particular move is good or bad. One may say there is luck among chessplayers in that they fight against such handicaps as the time-limit, ill-health, and other accidents, including their own too rash or cautious temperaments. But the ideal move exists at every stage, and it is within human capacity to find it.’


‘La chance aux échecs’ was the title of a feature on pages 284-287 of issue 25 of Les Cahiers de l’Echiquier Français (1931), in the context of a game between Gromer and Gibaud.


A brief discussion of luck appeared on page 174 of Masters of the Chess Board by Richard Réti (London, 1933). For example, Réti remarked:

‘It is well known that Bogoljubow, just like Lasker, is one of those chess masters who have had exceptionally good luck. This luck is not undeserved, however, but a consequence of the method of play.’

‘J.N. Hanks recently made a thought-provoking remark. He said a player can have good luck in chess, but not bad luck.’

Two ‘Tales of a Woodpusher’ articles by Fred M. Wren:


Some comments under the heading ‘No Luck in Chess?’ are on pages 76 and 182 of How Chess Games are Won by Samuel Reshevsky (New York and London, 1962).


Many writers ascribe to Capablanca the axiom ‘Good players are always lucky’. How far back can the remark be traced, attributed to the Cuban or to anyone else?

We have found nothing published during Capablanca’s lifetime but can offer the following:

‘As they say in New York, the good player is always lucky.’

That was written by Reuben Fine on page 88 of the April 1942 Chess Review, when introducing a game between Seidman and Reshevsky. See too page 4 of Fine’s book Chess Marches On! (New York, 1945).

‘It’s better to be lucky than good, Capa used to say.’

‘... Capablanca’s profound observation that the good player is always lucky.’

Another specimen of auctorial embroidery:

‘Some years later [after the game Mieses v Capablanca, Berlin, 1913] a disgruntled player at the Manhattan Club was complaining bitterly about a great position he had botched and remarked of his opponent, “He sure is lucky”. Capablanca smiled sagely and rejoined, “Good players are lucky”. He may have had this game in mind.’

Bad writers are always lucky, but never in the long run.

‘Chess is so complex that the result of any particular game is partly a matter of luck. Over a series of games the slightly stronger player should win, but in an individual game one can only say that he has slightly better than an even chance; anything can happen.

Chess is far more “flukey”, for instance, than tennis, squash or billiards. In those games, a single bad blunder rarely spells disaster; in chess, often.’

‘Chess is a fighting game which is purely intellectual and includes chance.’

Anyone who searches on the Internet for that exact wording (attributed to Richard Réti) will find innumerable occurrences, but what Réti wrote was the opposite – ‘excludes’ and not ‘includes’:

‘But in chess we get a fighting game which is purely intellectual and excludes chance.’ 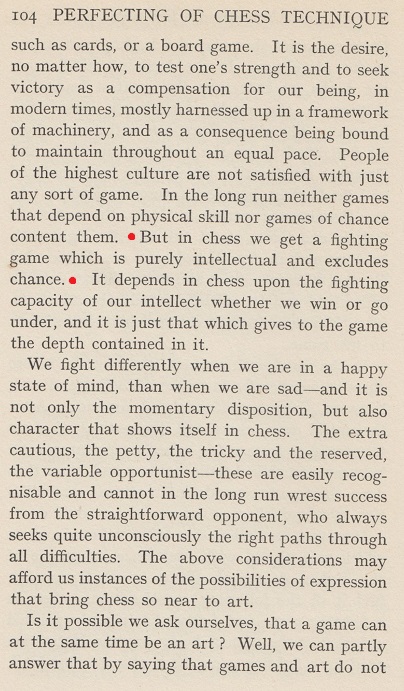 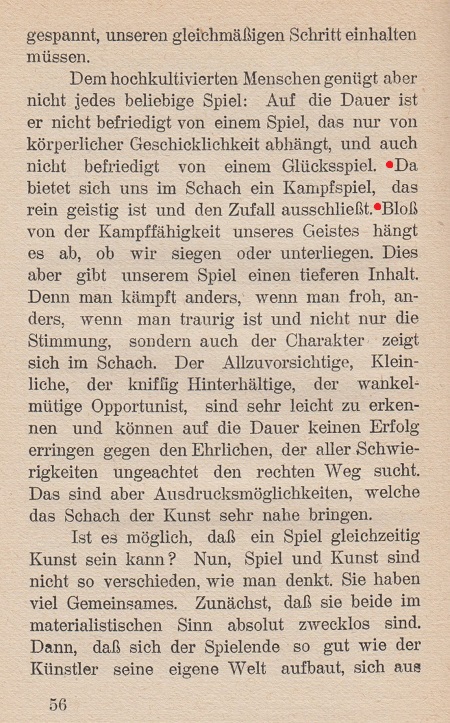 When will it be realized that checking sources is indispensable?