The then US champion, Frank James Marshall, played 8...d5 against Capablanca in the first round of the New York, 1918 tournament, and some writers still perpetuate the myth that Marshall held the gambit in reserve for many years to spring it on the Cuban. For example, C.N. 3097 quoted from page 20 of Every Move Must Have a Purpose by Bruce Pandolfini (New York, 2003):

‘Humiliated by the loss [his match defeat by Capablanca in 1909], Marshall diligently trained for some future encounter with the Cuban. He developed a curious gambit that seemed to afford him splendid chances regardless of how Capablanca replied, and he practiced in private to keep his plan a secret.

Seven years went by before Marshall’s opportunity came knocking. He unveiled his new setup at the Manhattan Chess Club Masters Tournament in New York [in 1918] …’

‘Marshall did not have to wait “seven years”. Page 93 of our book on Capablanca pointed out that between 1910 and 1918 the Cuban played 1 e4 against Marshall on six occasions. Five times the American responded with the Petroff Defence and once with the French Defence. As little as three years before Marshall played his 8…d5 gambit he was still unwilling to face 1 e4 e5 2 Nf3 Nc6 3 Bb5 from Capablanca.’

Whether Marshall played the 8…d5 line before his meeting with Capablanca is a question raised in C.N. 1798. An oft-published game is Walter Frere v Marshall, ‘New York, 1917’ (see, for instance, pages 238-239 of 1000 Best Short Games of Chess by Irving Chernev), but we have yet to find it in a magazine or column of the time. As mentioned in C.N. 2332, Marshall published the Frere game on pages 110-111 of his rarely-seen book Comparative Chess (Philadelphia, 1932):

It will be noted that Marshall offered no date or venue, merely announcing, ‘The following game was played some years ago, to test out my new defence in the Ruy Lopez.’

A further curiosity in Comparative Chess is that on page 104 it was 7…O-O, rather than 8…d5, that Marshall emphasized. Of 7…O-O he wrote (incorrectly), ‘This move of mine, I claim to be original’.

From page 135 of The Greatest Ever chess opening ideas by Christoph Scheerer (London, 2008):

We are aware of no ‘argument’ about the venue of the Walbrodt game, which was given in C.N. 1996 (see page 151 of Kings, Commoners and Knaves). He played the game in Havana on 18 or 19 February 1893 against four Cuban amateurs: Enrique Conill, Enrique Ostolaza, López and Herrera. In another encounter involving the same players Walbrodt was Black.

The Deutsche Schachzeitung (pages 110-111 of the April 1893 issue) gave only the game in which the Allies had the white pieces:

We believe that the German magazines’ spellings of the name Ostolaza were incorrect. See page 23 of Ajedrez en Cuba by Carlos A. Palacio (Havana, 1960).

Regarding Capablanca v Marshall, New York, 1918, page 259 of part one of Garry Kasparov on My Great Predecessors (London, 2003) quotes Capablanca’s note in My Chess Career on 15...Nxf2: ‘The trapper trapped. Black, however, had nothing better, and had to go on with the attack to do or die’. Kasparov’s book then comments:

‘Very likely a mistake and overlooking the reply. 15...h5 was perhaps the best way to keep up the pressure.’

Below, for the record, we give in full his brief notes to the game in the tournament book:

7...O-O: ‘Castling has been supposed to be undesirable at this point, on account of 8 Bd5.

8...d5: ‘The sacrifice, if accepted, yields Black a powerful attack, although of a doubtful nature, and I am inclined to think that White should come out with advantage.’

18...Bg3: ‘The alternative was 18...Nh1, leading to a complicated game, but always White is apparently able to find a valid defense.’

22...Rae8+: ‘As it is important for Black to avoid exchanging queens he is now compelled to drive the king to c2 and presently also his rooks are on the wrong side of the board.’

Below is the only photograph we recall from the New York, 1918 tournament, which was held at the Manhattan Chess Club. It appeared at the front of the tournament book and on page 252 of the December 1918 American Chess Bulletin. The caption quoted was in both sources.


How exactly did the famous 1918 encounter between Capablanca and Marshall end? On page 90 of The Immortal Games of Capablanca (New York, 1942) Fred Reinfeld stated that after 35...Re3 ‘Capablanca announced mate in five [sic]’, beginning with 36 Bxf7+. 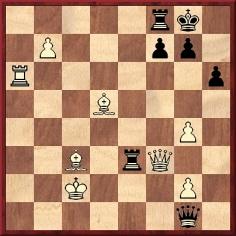 On page 187 of My Chess Career (London, 1920) Capablanca wrote after 35...Re3, ‘BxPch and mate in five moves’. The Cuban also annotated the game on page 12 of the New York, 1918 tournament book. As mentioned in our feature article on the game, the note appended to 36 Bxf7+ read, ‘White forces checkmate in six moves’. No mate announcement was suggested.

‘At the time of the evening adjournment Capablanca had begun to get a real hold on the position. After resumption of play in the evening session, Marshall did not last much longer and was finally pushed to the wall with a forced checkmate in five moves.’

At which move was the game adjourned? As regards the playing arrangements, page 7 of the tournament book stated:


Regarding the involvement of Vassily/Basil Soldatenkov in the Marshall Gambit, see C.N. 6138.


We are still trying to determine when the Frere v Marshall game first appeared with the date 1917, i.e. the year before the Marshall Gambit was played by the US champion against Capablanca. The earliest instance found so far remains pages 238-239 of 1000 Best Short Games of Chess by Irving Chernev (New York, 1955):

On page 11 of the January 1983 Chess Life A. Soltis wrote regarding the opening of Capablanca v Marshall, New York, 1918:

‘But how much of a surprise was it really? A year before his attempt at revenge against Capablanca, Marshall saw this game published ...’

There followed Frere v Marshall, ‘New York, 1917’. Mr Soltis’ account being devoid of any sources, it can only be wondered on what specific grounds he stated that Marshall saw the Frere-Marshall game published in 1917. We have found the game nowhere prior to Marshall’s Comparative Chess (Philadelphia, 1932), a book which, moreover, gave the game datelessly. 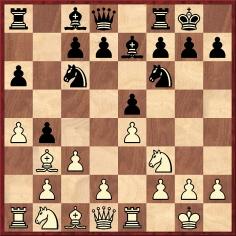 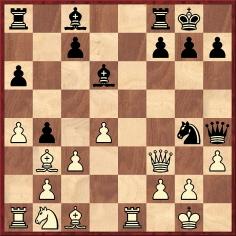 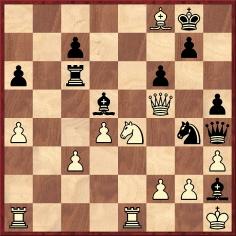 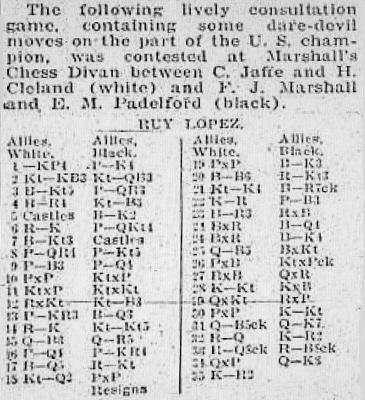 The game-score has been contributed by Eduardo Bauzá Mercére (New York, NY, USA), who writes:

‘With the moves 8 a4 b4 added, here is Marshall playing his Gambit many months before his encounter with Capablanca (which was played on 23 October 1918). The consultation game probably took place on 15 February 1918 at Marshall’s Chess Divan. That was the day of the third annual dinner, presided over by H.E. Cleland. A rapid transit tournament was also played that day (New York Post, 16 February 1918, page 12; see too the American Chess Bulletin, March 1918, page 53).

It will be noted that Marshall even played 16 (15)...h5, a move discussed in your feature article on the Marshall Gambit.’


Three games in which Black deviated from the Capablanca v Marshall game by playing 20...Qxc1 rather than 20...Bxf2:


Page 21 of Modern Chess Preparation by V. Tukmakov (Alkmaar, 2012) follows Kasparov in erroneously ascribing the idea of 15... h5 to Shamkovich, whereas Capablanca himself had pointed it out.

‘... when faced with Marshall’s gambit in the first game of their 1918 match, Capablanca rose to the occasion.’


C.N. 10788 noted the reference to Marshall as the ‘Dean of American Chess’ on page 67 of the March 1943 Chess Review. That was in the introduction to a feature about the Marshall Gambit on pages 67-70:

Firstly, an analytical oversight by Capablanca: Marshall now played 13...Ng4, and the Cuban wrote in My Chess Career:

Page 157 of the 1994 algebraic edition of My Chess Career changed Capablanca’s words and added an editorial note in italics: Position in Capablanca’s analysis after 18...Rae8+ On page 141 of a subsequent (1970) monograph on the Cuban, Panov ascribed the discovery of 19 Be6 to E. Palkin of Leningrad, 36 years after the game was played: Palkin was also mentioned by Leonid Shamkovich in an article about the game on pages 28-30 of the September 1985 Chess Life: Wanted: more information about the discovery of 19 Be6 by E. Palkin in the mid-1950s and, more generally, about Palkin himself. Does a reader have access to the Manchester Weekly Times (chess columnist: V.L. Wahltuch)? Olimpiu G. Urcan (Singapore) has found this picture in the photogravure section (pages unnumbered) of the Baltimore Sun, 1 December 1918: The request in C.N. 10909 for information about the publication in which E. Palkin reported that analysis by Capablanca in My Chess Career missed 19 Be6 has been answered by Andrey Terekhov (Singapore) and Vitaliy Yurchenko (Uhta, Komi, Russian Federation), both of whom have provided page 50 (‘Readers’ letters’) of the 2/1954 issue of Shakhmaty v SSSR: He lists three ‘myths’, and those 32 lines of text contain no facts not given in our feature article on the Marshall Gambit. There is even some verbatim copying, without a word of acknowledgement.

Concerning untrue claims that Marshall saved his Gambit for many years in order to surprise Capablanca, we wrote:

... between 1910 and 1918 the Cuban played 1 e4 against Marshall on six occasions. Five times the American responded with the Petroff Defence and once with the French Defence.

‘Between 1910 and 1918 the Cuban played 1 e4 against Marshall on six occasions. Five times the American responded with the Petroff Defence and once with the French Defence.’

With regard to the game Frere v Marshall supposedly played in 1917, our article states:

Marshall published the Frere game on pages 110-111 of his rarely-seen book Comparative Chess (Philadelphia, 1932). ... A further curiosity in Comparative Chess is that on page 104 it was 7…O-O, rather than 8…d5, that Marshall emphasized. Of 7…O-O he wrote (incorrectly), ‘This move of mine, I claim to be original’.

‘Marshall published the Frere game on pages 110-111 of his rarely seen book Comparative Chess. A further curiosity in Comparative Chess is that on page 104 it was 7...O-O, rather than 8...d5, which Marshall drew attention to. Of 7...O-O, he wrote (incorrectly), “This move of mine, I claim to be original”.’

From page 3 of that issue of CHESS:

On 13 October 2018 we sent CHESS a brief, purely factual, Letter to the Editor. The magazine decided to publish instead, on page 50 of the November 2018 issue, an apology which, though complimentary, was confused and confusing.


From page 8 A of the Philadelphia Inquirer, 6 March 1938, in Walter Penn Shipley’s ‘Chess and Checkers’ column: 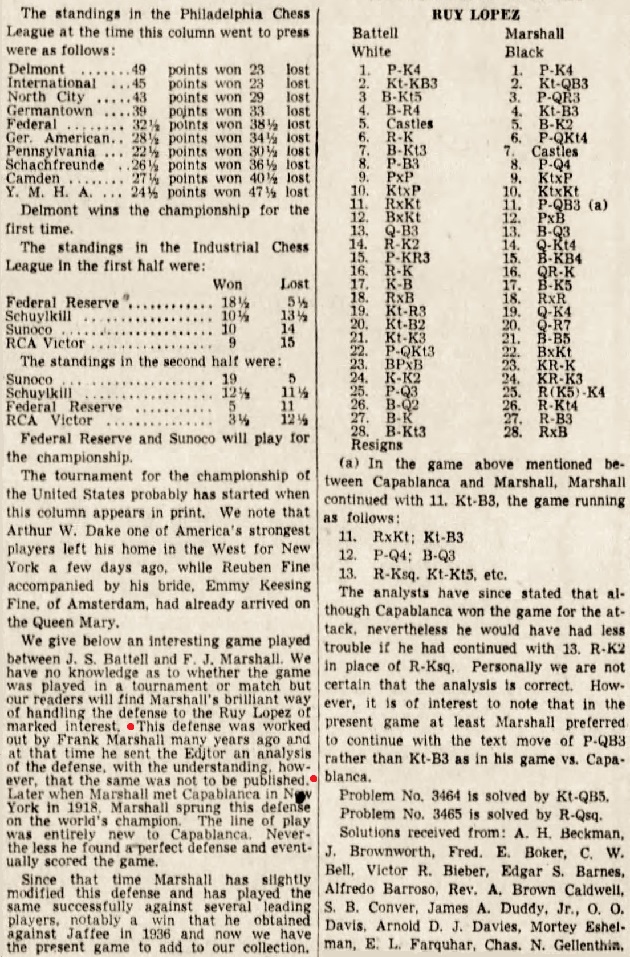 The Battell v Marshall game, played in the Marshall Chess Club Championship, is in databases (the bare score was published on page 7 of the January-February 1938 American Chess Bulletin), but the highlighted comment by Shipley about the Marshall Gambit pre-1918 is noteworthy.