Below is a digest of C.N. items relating to Colonel Moreau and/or players of the period with a similar name.

Mike Franett (Seattle, WA, USA) invites readers to supply information about Colonel Moreau, who lost all 26 of his games at Monte Carlo, 1903.

‘Colonel Moreau, who finishes last is perhaps stronger than the score would indicate, but he is not used to Tourney play, and too old to stand the continuous strain.’

The ‘perhaps’ is decidedly unflattering. It is difficult to find firm biographical information about the dogged colonel. Pages 175-176 of La Stratégie, 15 June 1874 gave a victory by Rosenthal at queen’s knight odds against a player named Moreau, and page 229 of the June 1900 BCM described the opening 1 e4 e5 2 f4 exf4 3 Bc4 Nc6 as ‘a defence much exploited, if not invented by Mr C. Moreau, of London’. Who can help build on these jottings?


Page 16 of the January 1893 BCM had a paragraph which began: ‘Mr C. Moriau (champion) is a Frenchman, but does not look it.’ He joined the City of London Chess Club in 1875 but subsequently went to the United States and France, rejoining the London club in 1888. Mention was made of a blindfold performance by Moriau at the Metropolitan Chess Club, where he played two games in English, two in French and two in German. A portrait of him was given in the same issue of the BCM. He would appear to be the player referred to in the 1900 BCM quote given in C.N. 2434.


H.J.M. Smout (Leiden, the Netherlands) mentions that an article by C. Moriau on 1 e4 e5 2 f4 exf4 3 Bc4 Nc6, the opening referred to in C.N. 2434, was published on pages 44-48 of the February 1874 Deutsche Schachzeitung. Around that period the magazine had Moriau’s name several times, giving Lyons as his place of residence.

An additional comment on page 355 of A Chess Omnibus:


As regards his forename, page 47 of the February 1903 Wiener Schachzeitung (edited by Marco, a participant in the tournament) had ‘Ch. [i.e. Charles] Moreau’.

It was mentioned in A Chess Omnibus that the list of subscribers to Reinfeld’s 1935 book on Cambridge Springs, 1904 included ‘C. Moreau’, and here we add that our copy of Reinfeld’s book Thirty-five Nimzowitsch Games, 1904-1927 (New York, 1935) contained, handwritten, the subscriber’s name, C.A. Moreau: 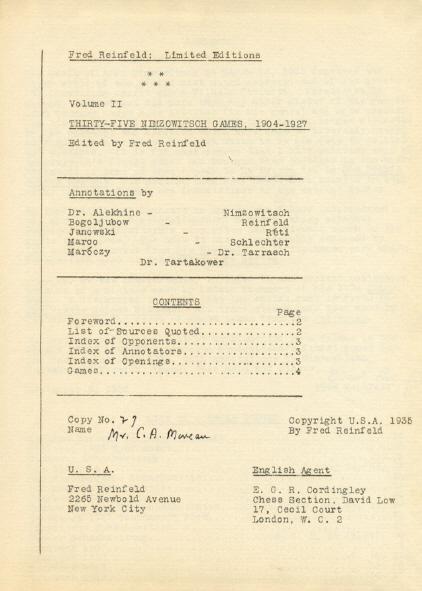 However, the list of subscribers on page 91 of Keres’ Best Games 1932-1936 (New York, 1937) by F. Reinfeld stated ‘C.L. Moreau’. Whether or not it was Colonel Moreau whom Reinfeld had among his subscribers is not known.


Many gaps and much confusion exist regarding Colonel [Charles?] Moreau and C[amille] Moriau.

Jerry Spinrad (Nashville, TN, USA) informs us that he first saw Moriau’s forename given as Camille in a chess article in the Australasian, 16 April 1892. He has now found Moriau’s exact date of death (24 November 1926), on page 4 of The Times, 14 January 1927: 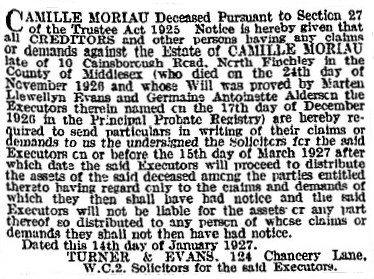 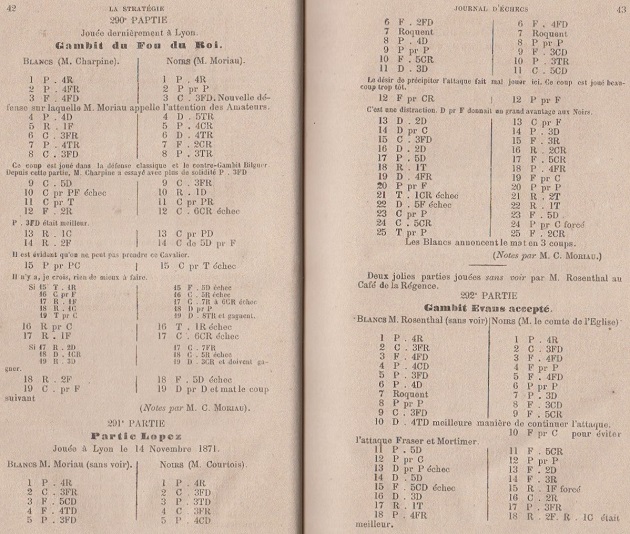 The games were introduced as follows on page 41: 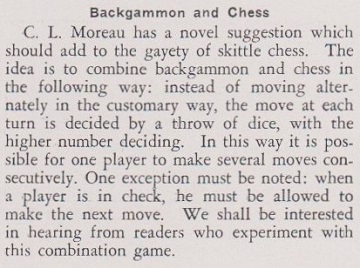 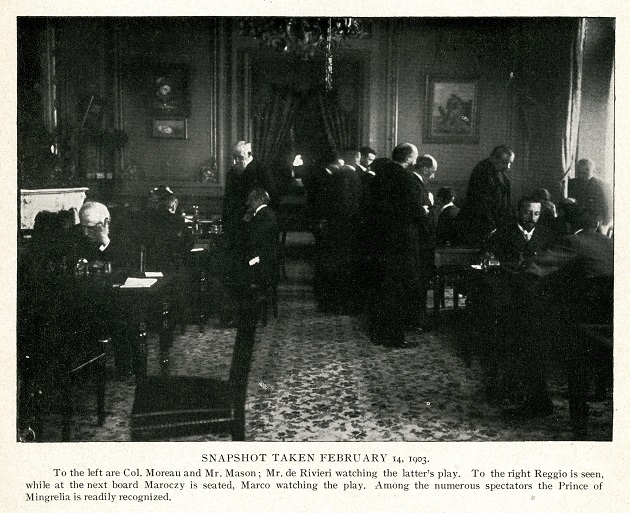 We are grateful to the Cleveland Public Library for providing a high-resolution scan.

The photograph was omitted from the 1983 compilation/reprint by Edition Olms Zürich The Monte Carlo Tournament of 1903. According to pages 103-104 of that book (material originally published in the American Chess Weekly, 18 June 1903) the pairings on 14 February 1903 included Mason v Reggio, whereas the above caption, confusingly written in several respects, places them on different sides of the room.

Until now, no portrait of Colonel Moreau has been available, but Olimpiu G. Urcan (Singapore) has found the photograph below, reproduced here courtesy of the London Borough of Hackney Archives (photograph reference number D/S/1/3 no.3): 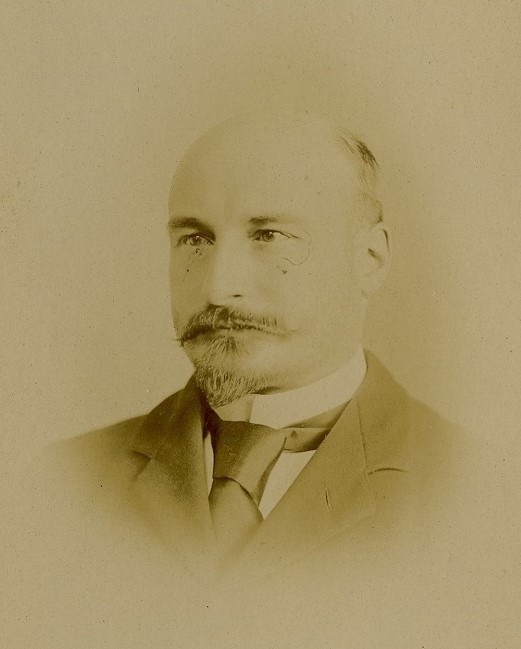 Readers are invited to compare the above portrait with the picture in the January 1893 BCM which was mentioned in C.N. 2439:

We wonder what to make of a comment about Colonel Moreau’s performance at Monte Carlo, 1903 (all 26 games lost) on page 109 of The Batsford Book of Chess Records by Yakov Damsky (London, 2005):

‘After this, the colonel broke all records by the number of gifts he received! Sarcastic spectators brought him (or even posted him) hens’ and quails’ eggs, potatoes, tomatoes, apples, beads – in a word, anything shaped like a zero. Needless to say, each gift consisted of precisely 26 articles.’ 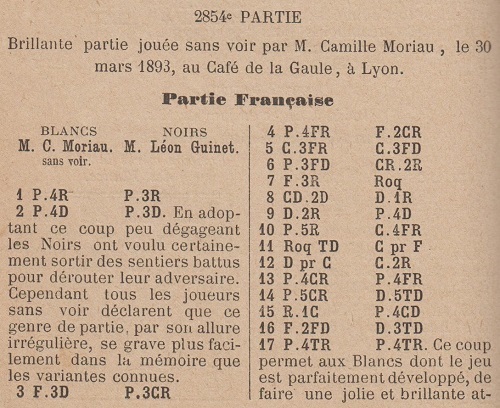 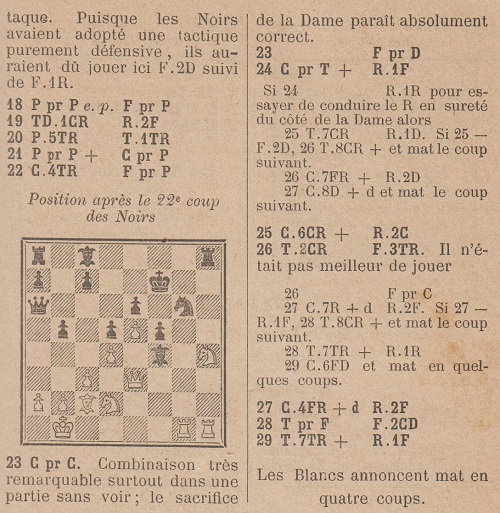 ‘A 1901 census entry regarding 4 Holford Street, Clerkenwell, London, records that “Camille Morian” was a boarder there, a single man, aged 50 (National Archives, RG13/252, page 22). His occupation was entered as “Manufacturer’s Agent: ex-chess champion”. He was an employer, and was a French subject, born in Lyons.

The National Probate Calendar supports the date of death of Camille Moriau which was reported by Jerry Spinrad in C.N. 9441, i.e. 24 November 1926. His effects amounted to £7,158 15s. 2d. An entry in the General Register Office’s online index of deaths for Camille Moriau (December quarter 1926, Barnet registration district, volume 3A, page 440) gives his age as 75.’