Léonardus Nardus, a little-known Dutchman, was not only a chessplayer and sponsor but also an accomplished artist and much else besides.

A victory over Marshall appeared on pages 327-328 of La Stratégie, September 1910 with Marshall’s notes:

‘Friendship.
I dedicate this work
to
My dear Friend
Leo Nardus
The Dutch Artist of Suresnes, S, France,
Whose name is so well known in Chess,
a strong amateur, enthousiast [sic] and real lover of our noble pastime.’

The book featured three photographs of Marshall and Nardus in play:

Page 4 of the January 1929 American Chess Bulletin gave a photograph of Nardus’s ‘splendid residence ... located in La Marsa, a suburb of Tunis’, where Marshall had stayed as a guest. The picture was inscribed ‘To dear Frank Marshall; always welcome’.

The September 1912 issue of La Stratégie had a photograph of Janowsky, Nardus and Marshall in Biarritz:

A win by Nardus against Janowsky in Biarritz (September 1912) was published (position only) on page 364 of the same issue:

As regards Nardus the artist, we turn to L’oeuvre de Léonardus Nardus, a catalogue of the paintings and drawings he put up for sale in Amsterdam on 23 January 1917 for the benefit of the Red Cross in France and Belgium. An introductory note on page 3 stated that he had been born in Utrecht on 5 May 1868 ‘et fit ses études à l’Académie des Beaux Arts d’Amsterdam (Altmann)’. Having travelled widely (Italy, Tunisia, Algeria and Spain), he was, at the time of the sale, resident in Holland.

The catalogue began with four portraits of chessmasters (all signed and dated 1912), and they are reproduced below:

A footnote on page 5 specified that the painting of Lasker was not for sale, being the property of Lasker himself and included in the catalogue only for the sake of completeness. In addition, page 11 listed (but did not show) a 1913 charcoal drawing of Janowsky.

A few years ago a Dutch correspondent, Adri Plomp mentioned to us that three of the above paintings (i.e. not the Taubenhaus one) were reproduced in Tijdschrift van den Nederlandschen Schaakbond in 1919, together with the following self-portrait of Nardus:

Perhaps a reader can find information about the outcome of the 1917 sale from reports in the local or specialized press.

About Nardus’s later years, very little seems known, although we note that the website http://harissa.com/D_Arts/peintresdetunisie.htm states that he died in 1955.

A little information about the Lasker painting was given in C.N. 11524, from page 16 of the January 1913 edition of La Stratégie:

Hans Ree (Amsterdam) has sent us a copy of the biographical sketch in Léo Nardus Un peintre hollandais en Tunisie by Narriman El Kateb-Ben Romdhane, a publication which marked an exhibition of about 50 of Nardus’ paintings at the Espace Sophonisbe in Carthage in November-December 1997.

The narrative states that Léonardus Nardus was born in Utrecht on 5 May 1868, the son of an antique dealer, Emanuel Salomon, and Alida Ballen. After training in art and antiques, he undertook in 1889 a brief, unsuccessful gold-hunting expedition in Argentina. He later became an art dealer, working in the United States as from 1894 but going back to Paris just after the turn of the century. In addition to collecting works of art, he developed his own painting skills. In 1904 he married the daughter of an art-dealer, Hélène Jeanne Marie, and they lived on the outskirts of Paris at the Château d’Arnouville-les-Gonesses and, subsequently, at the Château de Suresnes, which he later named ‘Léa-Flory’, after his two daughters (born in 1905 and 1908). Subsequently Nardus separated from his wife, and the daughters’ upbringing was entrusted to a Bordeaux governess, Marie Gendraud.

He continued collecting works of art and became known, on account of his wealth, as ‘l’homme aux cinquante millions’. In 1911 the Salomon family chose the patronymic name Nardus.

His first personal exhibition was at the Galerie Rosenberg, Paris in May 1913. Returning to Holland, he lived from 1915 to 1920 in the village of Blaricum. At the age of 53 (i.e. around 1921) he decided to have a residence (a small palace) constructed in Tunisia, choosing the resort of La Marsa, which is about 20 kilometres from Tunis. He was joined there by his daughters and Marie Gendraud. To avoid the effects of legal proceedings begun by his wife, Nardus entrusted to his friend and associate Arnold van Buuren his collection of 156 paintings, which included works by Rembrandt, Rubens, Hals and Velázquez.

Nardus sustained considerable losses in the 1929 economic crisis but continued to live well in Tunisia and to sponsor local artists. Van Buuren was arrested by the Nazis in 1941, and Nardus’ collection was seized and sold to unknown parties. Van Buuren died in prison during the Second World War, and Nardus was now left only with what he had in Tunisia. His final years were marked by financial difficulties, and in 1951 he was obliged to sell his home in La Marsa to an estate agent in return for a life annuity. He died in June 1955 at the age of 87.

Page 6 of the publication has a photograph of Frank Marshall playing chess against Arnold van Buuren, with Nardus looking on.

Peter van Hooren (Kortenhoef, the Netherlands) draws to our attention a recent book on art history which reports that Nardus was a swindler and forger. The volume in question is Van Cuyp tot Rembrandt. De verzameling Cornelis Hofstede de Groot edited by Luuk Pijl (Ghent, 2005), and the main charges against Nardus, from page 77, are given in the extract below:

These accusations against Nardus are corroborated in the notes section (page 306). We hope to keep abreast of, and report on, art historians’ further investigations into the affair.


To the various photographs of L. Nardus already given in C.N. is added the following, from page 43 of The Gambit, February 1930:

The accusation is founded on a letter (Philadelphia, 10 September 1908) from Cornelis Hofstede de Groot to Nardus, who was then living a wealthy life in Paris. The assertions are as follows:

The above works had been sold by Nardus to Peter A.B. Widener (1834-1915), except that one of them (by Memling) was sold to Widener’s friend John Graver Johnson (1841-1917). Nardus had also sold Widener other paintings which were originals. The total number of paintings sold by Nardus to Widener is not specified. In his letter Hofstede de Groot did not accuse Nardus of fraud, but pressed him to correct his mistakes.

Nardus replied to Hofstede de Groot on 24 September 1908, denying everything. He affirmed that the paintings which he had sold included no copies or forgeries.

The book says that it is unknown how matters ended but that Widener bought two more paintings (late Rembrandts) from Nardus in 1909-11. Both were imitations. In addition, endnote 83 states that in 1907 Nardus gave a supposed Rembrandt to De Lakenhal, which is a museum in Leiden, the Netherlands. According to endnote 86, the above-mentioned document dated 10 September 1908 was Hofstede de Groot’s own rough copy of his letter to Nardus.’


Information is still being sought about L. Nardus’ works of art and his bona fides or otherwise. We have a catalogue of an auction held in Paris on 9 February 1953; the paintings belonged to an unnamed person, some of them coming from Nardus’ collection (‘appartenant à Monsieur X ... et provenant pour partie de la Collection L. Nardus’).


Peter van Hooren reports that Nardus has been fully exposed as an art swindler in an article ‘Gross False Pretences’ by Jonathan Lopez in the December 2007 issue of Apollo (accessible on-line after simple registration).

‘Several of the greatest collectors of Old Master paintings in turn-of-the-century America were sold fakes or wildly misattributed works by Leo Nardus. Drawing on newly discovered documents, Jonathan Lopez explains how Nardus was exposed and discusses the impact of his chicanery on the art market.’

To quote one brief passage from the highly interesting account:

‘Nardus is seldom mentioned in the annals of art history, although, from his arrival in New York in 1894 until his downfall in 1908, he was an extremely active and successful dealer in the United States. Fluent in four languages, a champion swordsman and an internationally known chess master, Nardus was a highly charismatic individual, and he used his charm to devastating effect in his business dealings.’

Regarding the article about L. Nardus by Jonathan Lopez in the December 2007 issue of Apollo, Peter van Hooren points out the following note on page 80 of the magazine:

‘Stéphane Bourgeois died in 1899; his brother Gaspard in 1904. Within months of Gaspard’s death, Nardus, who was then 36 years old, married Stéphane’s daughter, who was 17. Nardus thereby gained a stake in the gallery. It would operate (inconsistently) under the name of Nardus & Bourgeois until 1924.’


There are several references to Nardus in a fascinating book The Man Who Made Vermeers by Jonathan Lopez (Orlando, 2008). For example, page 35 has a photograph of Nardus (from Marshall’s Chess “Swindles”) and a reference to ‘the fabulously dishonest dealer Leo Nardus, one of the most colorful figures in the history of the art world, although a man little remembered today’. Mr Neslias informs us that in October 2010 his book Butin Nazi, dealing with Nardus’ final period in Tunisia, will be published by Geste éditions.


We are grateful to Mr Neslias for additional illustrations from his collection, including a Marshall inscription:

We have received from Mr Neslias two letters in which Nardus was thanked for his generosity in the war effort (the charity sale referred to in C.N. 3715 above):

Patrick Neslias provides from his collection a letter sent by Caroline Marshall to Léonardus Nardus announcing her husband’s death: 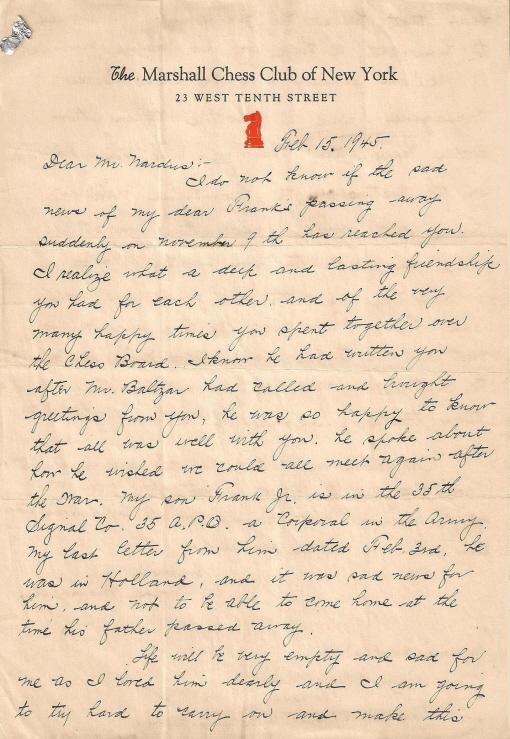 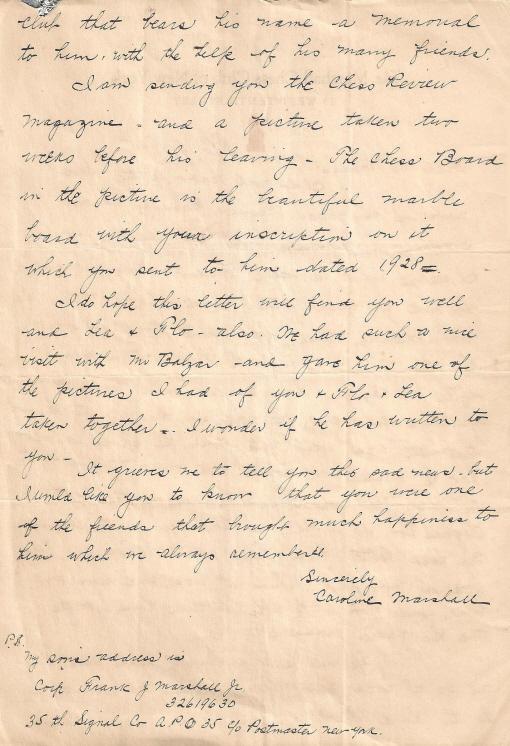 
Eduardo Bauzá Mercére (New York, NY, USA) provides an offhand game which he has found on page 8 of the New-Yorker Staats-Zeitung, 7 May 1900:

‘Among the visitors was M. Nardus, who generously offered to supply The Field with his sketches of the players at the chessboard. Although sketching at lightning speed, and under great difficulties, the players themselves shifting their positions constantly and the spectators standing in front of the artist, so that he could only catch occasional glimpses of the subjects, he succeeded, nevertheless, in completing five pictures (see page 301), the others to follow au fur et à mesure, as he said, when they are ready.’

The five sketches by Nardus: Much information about Léonardus Nardus (the index has dozens of references to him) is available in a book published earlier this year in the United States: The William Van Horne Collection by Mary Eggermont-Molenaar. Page 298 of Z. Franco’s book on Lasker (C.N. 11130) shows his awareness that the only world title match between Lasker and Janowsky was in Berlin in late 1910.

However, the following is on page 23: This was merely the last encounter in a four-game match in May 1909. From the report on page 167 of the May 1909 issue of La Stratégie: