It may be wondered when Nimzowitsch’s name was first associated with the defence 1 e4 Nc6. He played it against Důras at Ostend, 1907, and the tournament book (page 153) mysteriously headed the game ‘Königsläufer Eröffnung’, whereas in the index (page 334) it was referred to as ‘Verteidigung Niemzowitsch’. And when was the opening first ascribed to Nimzowitsch in his own writings? We offer pages 181-183 of the November-December 1920 issue of Tidskrift för Schack, in which he annotated a 1 e4 Nc6 game against Olson from the recent Stockholm tournament, the heading being ‘Niemzowitsch’s spelöppning’.

That issue of the Swedish magazine had Nimzowitsch’s annotations to no fewer than 15 games.

Our correspondent asks for information about Fischer and the reasons for associating his name with 1 e4 Nc6.

References to Eduard Fischer (why the Dictionnaire added ‘Fisher’ is unclear) are frequently found in German-language sources. A prime example is the 76-page book Die Fischer-Nimzowitsch-Verteidigung by Georg Deppe (Heidelberg, 1979): Below is the first part of a note on Fischer (page 73): As to volume 25 of the Handbuch der Schach-Eröffnungen by Rolf Schwarz (Hamburg, 1969) ... Hugh Myers’ books on 1 e4 Nc6 discussed such references to Fischer. The passage below, for instance, comes from page i of The Nimzovich Defense to 1. e4 (Yorklyn, 1995):

‘A couple of things should be said about this opening’s name. Nimzovich was by no means its originator or inventor, as he has been called in some books. It was at least known as far back as the sixteenth century. In the 1800s, several players introduced it into master competition before Nimzovich was born (1886). Nevertheless, Nimzovich Defense is widely applied to 1 e4 Nc6, and there is no clearly preferable name. It’s called The Fischer Defense, or Fischer-Nimzowitsch Defense, in Germany. That’s apparently because Wilfried Paulsen learned about 1 e4 Nc6 from Eduard Fischer during 1858-59. Then he and his brother Louis Paulsen played it in serious competition in the late 1860s. They gave credit to Fischer. The Oxford Companion to Chess (1984) states that 1 e4 Nc6 was “used regularly by the German player Eduard Fischer (1831-97)” and that it was “reintroduced by Nimzowitsch”. The problem with crediting Fischer, primarily known as a correspondence player, for his regular use of 1 e4 Nc6 is that I have never seen the score of a single game in which he played it. It’s doubtful that such a score would prove much anyway; 1 e4 Nc6 games by other players had been published in the 1840s. They are in this book.

As for Nimzovich, I don’t know that it should be said that he “reintroduced” 1 e4 Nc6 (others besides Fischer and the Paulsens had played it; Kennedy and Williams played it in the 1840s, and there are records of games with it by other players in every decade since then), but there’s no doubt that he was the first to play it with frequent success in major international competition. That is an acceptable reason for naming it The Nimzovich Defense.’

Regarding Modern Chess Openings, Eduard Fischer’s name was introduced in the 11th edition (1972), edited by Walter Korn. From page 192:

‘This “bizarre” defence was first advocated by the German master Fischer in the last century. Nimzowitsch subjected it to deep study in 1919 and came to the conclusion that it was sound.’ Below are the books on this opening in our collection:

Of the above books the only one mentioned in the ‘Bibliography’ on page 4 of Christophe Wisnewski’s volume is the second edition of 1...Sc6! ...aus allen Lagen. 
As noted in A Sorry Case, Heikki Westerinen has never written a monograph on 1 e4 Nc6, contrary to the assertion on page 50 of Unorthodox Openings by Joel Benjamin and Eric Schiller (London, 1987): An addition from Michael Allard (Bowie, MD, USA): The Dark Knight System: a Repertoire with 1...Nc6 by James Schuyler (London, 2013).


Sought: consultation games in which eminent players jointly suffer a quick defeat. An example is given below.


David McAlister (Hillsborough, Northern Ireland) sends a game published on page 3 of the Belfast News-Letter, 6 September 1888 with this heading: 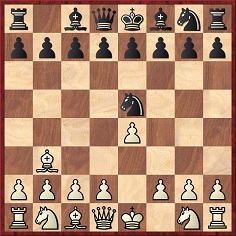 The players were not identified, the score was without notes, and no other information was provided, either about the occasion or to explain the term ‘Dublin Defence’.