A selection of C.N. items about the US chess writer Bruce Pandolfini. 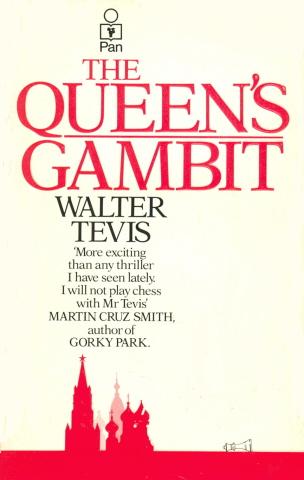 A number of works of fiction have been reviewed in Chess Notes, although The Queen’s Gambit by the late Walter Tevis is perhaps the first that deliberately aims for that category. It traces the elevation of Beth Harmon, a prodigy in chess, drink and drugs, to the loftiest heights of the first-named vice. The plot is implausible, the language unmemorable. ‘National Master Bruce Pandolfini’ is credited by the author for ‘proofreading the text and helping me rid it of errors concerning the game he plays so enviably well’, but so much of the text rings false that either B.P. did not read the manuscript or else he knows unenviably little about the game he nationally masters.

On page 19 (of the paperback edition) it is claimed that the Sicilian is a defence to 1 P-Q4. Page 66: Morphy’s unnamed opponent would hardly be called ‘grandmaster’. Page 87: ‘She gave a non-threatening check to his king, and he pulled away delicately and began advancing pawns. She stopped that handily with a pin and then feinted on the queenside with a rook.’ Pages 104-105: a game begins 1 e4 c6 2 d4 d5 3 Nc3 dxe4 4 Nxe4 Nf6 5 Nf3. Page 146: ‘It started out as a routine Queen’s Gambit Accepted; he took the offered bishop pawn, and they both developed toward the centre.’ Page 154: the references to chess moves are most bizarre. Page 163: a mention of ‘Fornaut’ as the author of Alexander’s book on Alekhine. Page 238: references to Shakhmatni v USSR, Echecs Europe and, anachronistically, American Chess Bulletin. Page 283: an improbable suggestion of ‘Mate in 19’.

The weaving in of ‘real names’ makes it difficult to know whether Boloslavsky (page 107) is the same person as Boleslavski (pages 207 and 256). The author, who has a side-line obsession with his heroine’s stomach, tends to show insufficient ingenuity in his artificially stylized accounts of chess tournaments (e.g. lack of draws and, in the interests of suspense, having Beth meet all her strongest opponents in the final round).

‘Tevis was a successful writer (The Hustler) but only an average player (he had a rating of about 1500). The technical flaws should have been corrected. It’s too bad he thought that a Chess Life columnist would be qualified to do that.’

A novel of which we have no knowledge was mentioned on page 299 of The Big Book of Chess by Eric Schiller (New York, 2006): ‘The Queen’s Gambit by Walter Titus.’

Bruce Pandolfini has written yet another new book for the Fireside Chess Library: Russian Chess (subtitle: ‘Learn from the New Champions’). It contains only six games, all won by Soviet players in the 1980s, but the annotations, aimed at inexperienced players, are detailed. The first game, for instance, takes 30 pages. Prose explanations are preferred to variations, and there is a good selection of general principles (‘concepts’). A more eccentric and misleading practice is the provision of quotes by Russian/Soviet writers (even Chigorin and Alekhine), fitted in to suit the games under discussion.

That old American verbosity is sometimes on show. ‘Black is less declarative in playing 1...Nf6’ (page 18). ‘4...b5 contributes nothing developmentally meaningful’ (page 23). ‘For the odoriferous pawn Black would lose a piece’ (page 120).

On page 18 of volume 1 of The Best of Chess Life and Review (New York, 1988) Bruce Pandolfini calls Al Horowitz ‘the most influential chess thinker in the country’. Poor America.

‘America’s leading chess writer’ is the description of Bruce Pandolfini on the front cover of Chess Openings: Traps and Zaps (a Fireside Chess Library paperback from Simon & Schuster). After reading the back-cover description ‘the first completely instructional book ever written on chess openings’, one marvels at how the modern game kept going for five centuries until Mr Pandolfini was ready to do a Fireside paperback. But in reality, of course, there have been dozens of books like Chess Openings: Traps and Zaps, all undistinguished and undistinguishable. True enough, Mr Pandolfini does break new ground by revealing on page 36 that Rudolf Spielmann lived to be 109 and by providing such pioneering gems as (page 43) ‘you could win in this position by 10 Bf4! or you could win equally impressively with 10 Bf4!’ The bad diagram trouble starts on page 3. The prose is casual in the extreme (‘Does it matter if you’re up material but badly developed ...?’ – page 81), and the Glossary, despite some good definitions, has the occasional impenetrable explanation such as: ‘Base of Pawn Chain: the pawn closest to its own back rank, when two or more pawns for each side block and immobilize their enemy counterparts, for either side.’ The bibliography records its debt to such predecessors (evidently not ‘completely instructional’) as Flórian’s ‘The Schlilemann Variation of the Ruy Lopes’.

Concerning our remark about Spielmann, see too C.N. 4857.


Among the film stars?

From page 27 of One-Move Chess by the Champions by Bruce Pandolfini (A Fireside Book, 1985):

‘With his great abilities and striking good looks, Capablanca was idolised both in and out of the chess world. In a major magazine’s poll in the 1920s, he was ranked as the world’s third most handsome man, right behind Rudolf [sic] Valentino and Ramon Novarro. Cecil B. DeMille even brought him to Hollywood, where he planned to make him a star.’

Wanted: substantiation of any or all of this.

‘Humiliated by the loss [his match defeat by Capablanca in 1909], Marshall diligently trained for some future encounter with the Cuban. He developed a curious gambit that seemed to afford him splendid chances regardless of how Capablanca replied, and he practiced in private to keep his plan a secret.

Seven years went by before Marshall’s opportunity came knocking. He unveiled his new setup at the Manhattan Chess Club Masters Tournament in New York [in 1918] …’

‘Marshall did not have to wait “seven years”. Page 93 of our book on Capablanca pointed out that between 1910 and 1918 the Cuban played 1 e4 against Marshall on six occasions. Five times the American responded with the Petroff Defence and once with the French Defence. As little as three years before Marshall played his 8…d5 gambit he was still unwilling to face 1 e4 e5 2 Nf3 Nc6 3 Bb5 from Capablanca.’

The meaning of en prise is obvious and easy to explain, or is it? English-language dictionaries give simple but serviceable definitions, such as ‘Exposed to capture’ and ‘In a position to be taken’, but some chess books aim for more and achieve less. From page 102 of Chess Thinking by Bruce Pandolfini (New York, 1995):

‘En Prise: “In take.” A French term indicating an undefended unit in position to be captured.’ 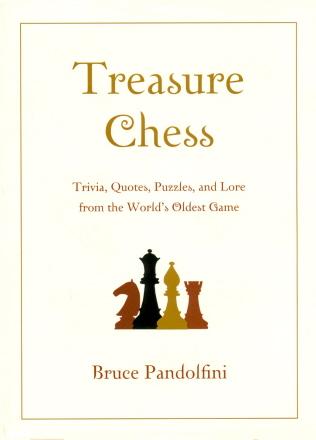 There has been a recent spate of ‘prose’ chess books woefully lacking in rigour, and the worst may well be Treasure Chess by Bruce Pandolfini (New York, 2007). ‘Trivia, Quotes, Puzzles, and Lore from the World’s Oldest Game [sic]’ is the subtitle, while the acknowledgements page begins with similar insouciance:

‘For a book like Treasure Chess it is not so easy to cite where all my references and impressions came from, so I’m not even going to try.’

Since much of the information provided is false, supplying citations would indeed have been awkward. Yet Pandolfini has not even made an effort regarding simple dates, whose margin of error ranges from a year (Capablanca’s birth, on page 75, and the publication date of Murray’s A History of Chess, on page 171) to a century or so (the founding of the American Chess Magazine, on page 67). Page 202 indicates that Marcel Duchamp lived to be 97 (‘1871-1968’), and it is all hit and miss. Thus whereas Morphy’s birth and death dates (1837 and 1884) are given correctly on page 67 (twice, in fact), page 20 states ‘1836-84’, while page 96 has the right digits but in the wrong order: ‘1843-87’.

Also concerning Morphy, page 60 affirms that ‘he was regarded as [US] champion until 1871’, and page 264 has the following fact-free ‘Fun’:

‘Paul Morphy did various inexplicable things, such as placing women’s shoes in a semicircle around his bed before going to sleep.’

‘His intuitive feel for the art of inscrutable sacrifice was difficult to play against, though chess fans loved it. Finally they had a champion they couldn’t understand, whom they understood.’

Inscrutability is a characteristic of the book’s pseudo-didactic parts. For example, the ‘Tools of the Trade’ section includes such advice as the following (pages 12-15):

Page 158 claims that ‘purists use [the term Zugzwang] to indicate positions where neither player wants to move, though in general chess parlance it also means that a particular player doesn’t want to move’, but no such mysterious purists are identified. Plain English does not come naturally to Pandolfini, even in his explanations of basic chess terms. On page 15 the skewer is defined thus: ‘Attack forcing an enemy unit off a line, exposing a unit or square.’ Nor is he comfortable with other languages. Page 174 refers to ‘La Palamede’, instead of Le Palamède, while page 253 unsuccessfully attempts to give the word ‘chess’ in seven random foreign languages (including ‘Scacci’ in Italian and ‘Schak’ in Danish).

History, of course, is mangled. Page 63 states that Capablanca made perfect scores at tournaments in New York in 1913 and 1914, but the Cuban participated in no tournaments in New York in 1914. Pandolfini even believes (pages 102-103) that Capablanca’s famous exhibition game in Moscow against Ossip Bernstein (29...Qb2) was played in the St Petersburg, 1914 tournament. Spurious games are attributed to Napoleon (pages 92-94). Page 166 reports that chess was probably created in A.D. 450 and that the board became chequered in A.D. 110. The latter date, of course, is just one more typo.

The book’s treatment of quotations could hardly be worse. Napoleon’s name is somehow dragged in again on page 272 for this description of chess: ‘Too difficult to be a game, and not serious enough to be a science or an art.’ On page 234 the remark about life being too short for chess is ascribed to both Lord Byron (1788-1824) and Henry James (1843-1916), instead of Henry James Byron (1835-1884).

The imprint page of Treasure Chess warns, ‘No part of this book may be reproduced in any form or by any means’, and anyone who cares about accuracy and truth will unhesitatingly comply. 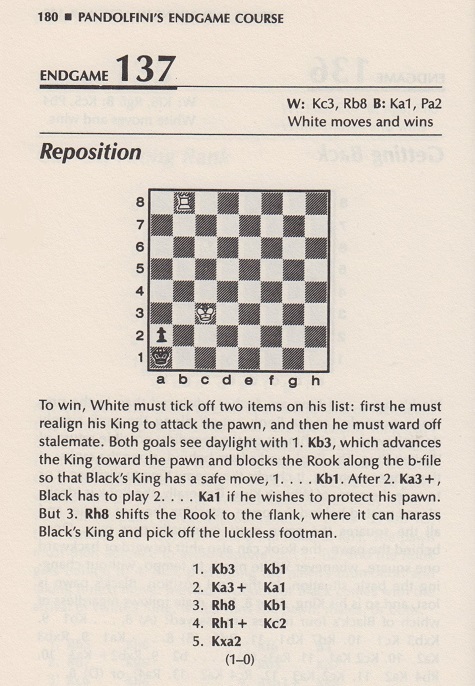