Concerning the threat/execution smoking anecdote (see A Nimzowitsch Story) Michael McDowell (Westcliff-on-sea, England) points out that an article by Jacqueline Piatigorsky ‘Growing As We Age’ contains the surprising claim that she witnessed the incident:

‘I remember watching a chess grand master play in a tournament. He was allergic to smoke.

When his opponent pulled from his pocket a big cigar and laid it on the table beside him, the grand master looked at the cigar. He kept staring at it. He was so upset he could not concentrate on his game. Finally he called the referee. His opponent smiled.

“But”, said the grand master, “he is threatening to smoke.”’ We add that there are many references to chess in the memoir of Jacqueline Piatigorsky (née de Rothschild), Jump in the Waves (New York, 1988). Since the book has no index, a list of the main references to the game is presented below, together with some quotes:

‘In an attempt to become part of the outside world, I turned toward my old interest and went to a chess club, only to face another humiliation. I took a board in a simultaneous exhibition. When I reached a critical position I must have shown anxiety and fear, for a stranger behind me said, “Move here”. I followed his advice, and won the game. At the end the Grand Master said, pointing at me, “She played a good game.”

“I helped her”, the man said. Though he had shown me only one move, I felt ashamed. I arranged for the Grand Master to come and give me lessons. He came two or three times and I improved.’

‘But my real love was chess. Chess was part of my blood. Of course, in the winter there was no-one to play with in Elizabethtown, so through a chess magazine I started to play by correspondence, entering tournaments in which one played six games at the same time. That was perfect for me. I had a small pocket set which I always carried with me and I studied each position in great depth. Before mailing out a move I was so anxious not to make an error that even alone in the woods my heart was beating hard. I went over each variation again and again. I had to win.’

‘The violinist Louis Persinger also had a summer home in Elizabethtown; he was a very good chessplayer, so naturally we played. I kept moving the pieces on the board when I analyzed positions by myself: I tried a variation, put the pieces back and restudied all possibilities, but in a regular game that isn’t possible. One has to visualize the different positions in one’s head. I had no experience of playing across the board, so I lost, and I kept losing each time I played him. I was back in childhood. My mother had said, “I wish I also had a daughter that could win!” I was a loser, and I was angry. Persinger gave me a book on openings, so for the first time I started to study the game.’

‘I continued to play chess and went to the club from time to time. ... In chess one deals with a cross-section of people. I played with a gardener and I played with Marcel Duchamp and Prokofiev ...’

‘When things seemed difficult, chess was always there. I started to solve the weekly problems from the Los Angeles Times and sent in the results. The chess editor then was Herman Steiner, who had been United States champion in 1948.’

She then describes going to Steiner’s home, ‘where he was running a chess club above the garage’. There she played her first tournament game. In that event, ‘I finished somewhere in the middle, but as I had a natural ability for combinations I won the brilliancy prize’. She then began to study with Steiner and was invited to the Women’s US Invitational National Championship at the Manhattan Chess Club. ‘Losing my first game was so traumatic that I wanted to thrash, beat, slash again, but there was nothing to slash. I had to be polite.’ She did not win the championship but ‘without realizing it I had become one of the ten best women players in the United States’. She subsequently participated in ‘the first women’s Chess Olympics’, in Emmen, the Netherlands in 1957 (and not 1954 as stated in the book). Afterwards, ‘I was still participating in tournaments, though I hated the pressure. Competitive chess is tiring beyond belief. ... Chess is highly obsessional and compulsive, so after every game the rest of the night is spent going over variations.’ From one of our inscribed copies of Jump in the Waves

‘A few years later, when my children were both away and Grisha [her husband] was starting to age, I did quit tournament chess. I was still roaming around the world with a distorted perspective, crushed by meaningless losses or overelated by meaningless wins. I had played since I was six years old. Chess had an obsessional grip on me, chess was my friend, my support. Chess was a refuge from unfairness. It had become part of my blood. Still, today, when I am exhausted and sad, when hope disappears, my natural impulse is to flop in front of a chess board and start pushing pieces. Variations take form; rush forward, retreat, attack, defend – no, an error, try again. Interest and vitality reborn flow into combinations, soon become storms, a typhoon in a teacup. It is ironic that chess and its combinations which are so sterile also awake a passion, bring life. On the little board, pieces grow and shrink like birds in a muddy marsh.’ 
Some further photographs are presented: Leonard Barden (London) notes a victory by Jacqueline Piatigorsky against Merete Haahr at Emmen, 12 September 1957, as given at the OlimpBase website.

We have been struck by how few of her games were published in US chess magazines. Here is a rare specimen, from page 23 of the January 1952 Chess Review: The encounter was described by Alekhine as ‘una partida de exhibición contra el campeón de Bolivia, Sánchez, en Bogotá, marzo de 1939’. There is no reason why a Bolivian should not play a game in Colombia, but verification of Sánchez’s identity is sought. The above-mentioned item in the American Chess Bulletin described him as the ‘winner of the 1938 “Olympic” tournament at Bogotá’.


Jules Welling (Best, the Netherlands) is seeking games played by either Gregor or Jacqueline Piatigorsky.

Assistance from readers will be appreciated. A brevity won by Jacqueline Piatigorsky against Mrs W.W. Owens was given in C.N. 5436, from page 23 of the January 1952 Chess Review. Jacqueline and Gregor Piatigorsky (source: the former’s autobiography, Jump in the Waves)


A number of readers have indicated game-scores in databases, but no games printed in publications of the time have yet been mentioned. The search continues.


Nikolai Brunni (Honolulu, HI, USA) has found several of Jacqueline Piatigorsky’s games in Chess Life, 1955. The most interesting is this loss: 
We are grateful to Andy Ansel (Laurel Hollow, NY, USA), John Blackstone (Las Vegas, NV, USA) and Ian Matthew (Portsmouth, England) for further game-scores. All have been forwarded to Jules Welling, our correspondent who made the appeal.


In 2013 John Donaldson (Berkeley, CA, USA) provided a number of photographs from the archives of Jacqueline Piatigorsky, including the following, which was given in C.N. 8051:

Mr Donaldson reports that the photograph was taken in Los Angeles in 1968, during the play-off match-tournament comprising Reshevsky, Hort and Stein, who had finished equal sixth in the previous year’s Interzonal tournament in Sousse. In Los Angeles, Averbakh and Benko were the seconds of Stein and Reshevsky respectively.

‘There is an article about Jacqueline Piatigorsky by Robert Cantwell on pages 22-27 of Sports Illustrated, 5 September 1966. The photograph of her with Fischer and Spassky on page 27 would seem to be little known.’

Courtesy of John Donaldson we reproduce below a photograph of Jacqueline Piatigorsky during her ten-move win against Willa W. Owens in the 1951 US Women’s Championship in New York. For the game-score, see C.N. 5436.

The picture comes from Mrs Piatigorsky’s archives and was taken by a fellow participant, Nancy Roos, who was a professional photographer. 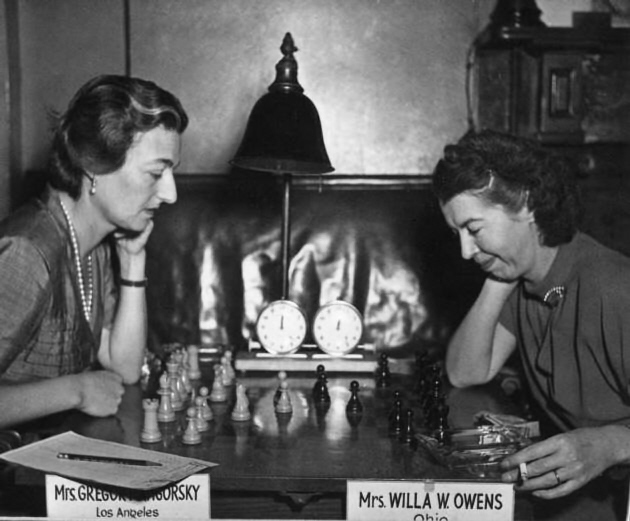 
The photograph below was published on page 100 of the April 1968 Chess Review: