A number of C.N. items have shown Arturo Pomar’s games. See, for instance:

There follows a miscellany of other C.N. items about Pomar.

Compositions by notable players are always of interest. The following mate-in-three problems were composed by the Spanish prodigy Arturo Pomar (born 1931) when he was about ten years old, according to page 231 of La vida de Arturito Pomar by Juan M. Fuentes and Julio Ganzo (Madrid, 1946):

This composition (White to draw) won second prize for A. Prokopchuk in a Ukrainian tourney in 1971 according to Study Database 2000:

At move five White would seem to be in extremis, but the same drawing line had already occurred over the board, twice. The first such game we came across was between Beltrán and Pomar in the Spanish championship, Saragossa, October-November 1957, the ending of which was analysed on pages 103-104 of a little-known book by Arturo Pomar, Las pequeñas ventajas en el final (Madrid, 1958). We quote below his notes in full, and it will be seen that the play he recorded corresponds exactly to the above study. (The analysis in the book had three impossible moves or typos, and we have italicized them.)

‘As will be realized, Black should apparently win easily, by dint of having his king in a magnificent situation and well advanced pawns. However, after painstaking analysis White found the only precise move to draw, based on the plan of sacrificing a pawn to obtain the opposition.

With this move White ensures a draw.

When the conclusion of this game was given on page 140 of Pawn Endings by Y. Averbakh and I. Maizelis (Oxford, 1987) the colours were reversed (i.e. Drimer was given as White). Two coincidences in the games are striking: both were played in 1957 and both had the surprising advance of the bishop’s pawn at move 53.

The over-the-board intricacies of a simple-looking endgame are matched by the historical complications; in particular, what can be found out about Prokopchuk and his study and did Pomar’s book give an incorrect conclusion to his game?

On the subject of the youngest-ever authors of chess books C.N. 543 (see page 108 of Chess Explorations) quoted a contribution from a US correspondent, John Rather, which included the following remark:

‘Pomar’s Mis Cincuenta Partidas con Maestros (1945) and Bobby Fischer’s Games of Chess (1959) were published when their nominal authors were 14 and 15 respectively, but the extent of their involvement in preparing the books is in doubt.’

Now Josep Alió (Tarragona, Spain) writes that Arturo Pomar cannot be regarded as the author of the 1945 book, and he therefore also takes issue with two references written by us in A Chess Omnibus:

Page 325: ‘There cannot be many autobiographical works in which the birth-date of the subject is not only wrong but also, so to speak, inconceivable. Page 11 of Mis Cincuenta Partidas con Maestros by Arturo Pomar (Madrid, 1945) announced that he was born on 31 September 1931.’

‘The title-page is rather deceptive, but in reality the book’s author is the well-known Spanish chess writer of the 1940s, Manuel de Agustín, with Pomar referred to in the third person in the text. The correct title is Pomar. Mis cincuenta partidas con maestros.’

Below we reproduce the title page:

De Agustín was attributed responsibility for the introductory material and the notes. The title means ‘My 50 games with masters’, and authorship was ascribed to Pomar at the time (e.g. in a book list from the publisher on the inside front cover of Ajedrez Español, April 1946). Nonetheless, on the basis of the contents of the book we agree with Mr Alió’s strictures and shall no longer describe it as ‘autobiographical’.

Miquel Artigas (Sabadell, Spain) informs us that he has acquired a copy of the book which de Agustín inscribed, referring to himself as ‘el autor’:

Christian Sánchez (Rosario, Argentina) sends the above cutting with caricatures of Arturo Pomar, Alexander Alekhine and Antonio Rico at Gijón, 1945, from page 6 of the Spanish (Cuenca) newspaper Ofensiva of 2 August 1945.

The caricature of Alekhine must be one of the last published during his lifetime.

To the small number of photographs of Francisco Lupi which are available, we add one from opposite page 145 of La vida de Arturito Pomar by Juan M. Fuentes and Julio Ganzo (Madrid, 1946):

Tim Jake Gluckman (Cologne, Germany) asks whether information is available on any contact between Francisco Franco and Arturo Pomar.

At present we can think of nothing apart from a photograph of them standing together, which was published, in small format, on the front cover of the 1 January 1997 issue of Jaque:

After Javier Asturiano Molina (Murcia, Spain) informed us that a full-length picture of Francisco Franco and Arturo Pomar was published on page 50 of the 6/2002 issue of Peón de Rey, we contacted the magazine’s director, Amador Rodríguez, and he has sent us a copy for presentation here:

We recall three photographs of Arturo Pomar in play against Ossip Bernstein at London, 1946:

When was the photographed game played?

‘In the third photograph the spectator standing one from the right is G.H. White, the leader of the consortium including G. Wood and B.H. Wood which bought out Edith Price from the Gambit Chess Rooms. The man clutching the chair with only the lower half of his face visible looks like Walter Veitch, who was a regular player at the Gambit.’

For purposes of comparison, below is a photograph of the first day’s play in the London tournament, published on page 6 of The Times, 15 January 1946:

‘An unfortunate hitch has occurred in the London chess tournament. The long expected Russian players have failed to turn up, and the players against whom they were paired awaited them in vain.’

The name-cards show that Smyslov was one of those expected and that he was scheduled to play Bernstein.

Christian Sánchez reports that the third Pomar v Bernstein photograph in C.N. 6573 was published on page 42 of ABC, 20 January 1946. There was a picture credit to ‘Ortiz’.

He also draws attention to page 2 of El Mundo Deportivo, 24 January 1946, which mentioned that a photograph of Pomar in play against Bernstein had been published in the New York Times.

We have found that picture (the second one in C.N. 6573) on page 35 of the sports section of the New York Times, 22 January 1946. The (faulty) caption was: ‘Arturito Pomar of Madrid during his match with Dr O.S. Bernstein of Paris at international event in London. The young Spaniard and his opponent played to a draw.’

Olimpiu G. Urcan (Singapore) notes a Pathé news item on the London, 1946 tournament, featuring Arturo Pomar in play (with the black pieces, as in the photograph above) against Ossip Bernstein, as well as footage of some other players, including Savielly Tartakower (briefly) and William Winter. The technical quality is good, with a commentary which is quintessentially English.

The photograph below has been provided by Olimpiu G. Urcan from the Illustrated London News, 26 January 1946, page 102:

Eduardo Bauzá Mercére (New York, NY, USA) offers a game from the 1958 Spanish championship which has the seesaw manoeuvre:

Thomas Höpfli (Schkopau, Germany) sends a link to a video report on Arturo Pomar which includes Fischer speaking a few words of Spanish.

Shortly after Alekhine’s death, Arturo Pomar published a tribute which included some comments on his personal contact with the late world champion:

A contract signed by both Alekhine and Pomar was reproduced overleaf from the title page of Alekhine’s book ¡Legado! (Madrid, 1946):

A photograph opposite page 145:

On pages 378-379 of the December 1946 issue Pomar annotated two games from the championship:


Another photograph of Pomar with Alekhine is on page 304 of Alexander Alekhine: Zhizn i igra by I. and V. Linder (Moscow, 2007), credited to the 3/2003 issue of Rochade Europa.

Arturo Pomar is the subject of the latest book that we have acquired, El peón by Paco Cerdà (Logroño, 2020): 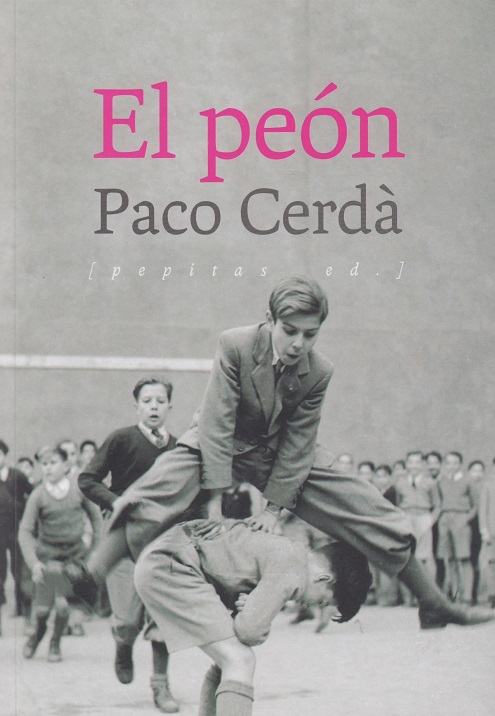 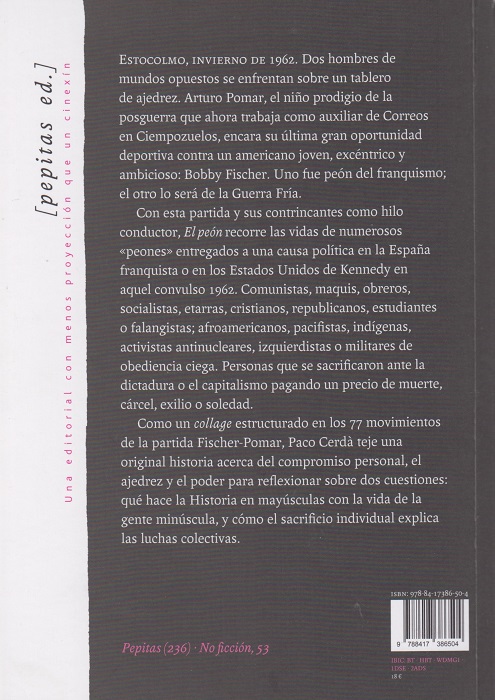