Pages 380-381 of Kings, Commoners and Knaves quoted from page 8 of Twenty-five Annotated Games by Robert Hübner (Berlin, 1996) an explanation of the practice followed in that book:

‘There are no exclamation marks, as they serve no useful purpose. The best move should be mentioned in the analysis in any case; an exclamation mark can only serve to indicate the personal excitement of the commentator. I do not want to impose my feelings on the reader, and I leave it up to him when to feel amazed or thrilled, and when not.’

‘We do, indeed, favour the use of exclamation marks, sparingly and pointedly: certainly no more than two after a move. But to shake, vigorously, a pepper-box full of such marks is to make them meaningless.’


An example of how a lack of punctuation can alter the meaning:

‘1946: Alekhine died giving FIDE the opportunity to seize control of the world title.’

His annotations appeared in the Remscheider Generalanzeiger and were reproduced on pages 240-242 of the Deutsche Schachzeitung, August 1933.

‘Every beginner (even those who have not read my books) knows that Black should not block his QBP. Why Petrosian does so remains incomprehensible.’

Can readers improve on past efforts to find the earliest instances of moves being awarded exclamation and question marks (see page 116 of Chess Explorations)?

‘The first “exclamation mark” I can discover is in Chess Player’s Chronicle Volume 1 page 4 (Staunton v Popert) but it was put in brackets (!) and denoted not a good move but a blunder! Walker’s Chess Studies occasionally does the same thing (see games 889 and 946). The earliest modern use of ! that I can find is in the BCM 1881, page 124 (Thorold v Wayte).’

In C.N. 647 another correspondent, Rob Verhoeven, pointed out that page 6 of Cook’s 1874 book Synopsis of the Chess Openings gave a list of abbreviations which included =, ! and ?, whereas Lange’s Jahrbuch des Westdeutschen Schachbundes 1862 used (!) and (?).

‘There are plenty of examples of exclamation marks in the BCM of 1881 before page 124. They start on page 23, where there is a note at the bottom of the page stating,“This sign (!) denotes ‘best move’”. The game between Wayte and Schmid on page 24 has exclamation marks for three moves in a row.

Page 253 of the Westminster Papers for 1 April 1874 includes an example of the double exclamation mark in the note to Black’s 33rd move in the game Madan-Keynes.’

Exclamation marks became prevalent in the Deutsche Schachzeitung in 1861, but at first the custom was to attach them to moves by Black in compositions, in the sense of ‘the best defensive try’. See, for instance, page 136 of the April 1861 issue. Another example concerns this position from page 70 of the January 1861 number: The solution appeared on page 228 of the July 1861 Deutsche Schachzeitung:


There cannot be many books by a master in which a move awarded an exclamation mark allows mate in one. From page 95 of The Fireside Book of Chess by I. Chernev and F. Reinfeld (New York, 1949):

Concerning the references to ‘the authors’ comment’ and ‘the analysts’, it should be noted that the eighth edition of the book in question, Kleines Lehrbuch des Schachspiels, was published in 1910, i.e. some 17 years after Dufresne’s death. The title page:

We should like to establish when the blunder first appeared in the book and when it was corrected. The following appeared on page 397 of the tenth edition, published in 1923:

A century or so ago, particularly in German-language chess literature, it was common to spread an exclamation mark or question mark across two or more moves which comprised a manoeuvre or idea. An example is the conclusion of Maróczy v Marco, Monte Carlo, 1902 on page 36 of the January 1904 Wiener Schachzeitung: A general matter is mentioned here in passing, concerning the use of punctuation in prose.


Chess and the English Language and Chess Punctuation have drawn attention to a common oddity: the way question marks are increasingly tagged on to sentences which are not questions.

In other circumstances, however, many writers make insufficient use of question marks. When the facts about, for example, a player’s identity, a date or a venue are open to doubt, the reader needs to be informed accordingly, and a question mark helpfully signals caution. Nonetheless, some writers prefer to plump, perhaps at random, for one of the options, thereby presenting as a certainty a matter on which the evidence is mixed. A question mark added in, for instance, a game heading, to indicate that the factual details are not clear-cut, is a sign of strength, not weakness.

There are many game-scores (e.g. Lasker v Thomas, London, 1912 and Réti v Alekhine, Baden-Baden, 1925) where the exact moves played are open to doubt, as well as games, such as Adams v Torre, New Orleans, 1920, which may not even have occurred over the board. It may seem obvious that a chess writer should differentiate between what is known for sure and what is obscure, but readers are often denied that basic service.

“I have attached question marks to the moves which change a winning position into a drawn game, or a drawn position into a losing one, according to my judgement; a move which changes a winning game into a losing one deserves two question marks. I have distributed question marks in brackets to moves which are obviously inaccurate and significantly increase the difficulty of the player’s task, but do not alter the evaluation of the position.” (Source: Twenty-five Annotated Games, page 7, just before the excerpt given in your feature article.)

On page 13 of Chess Life, March 2000 Andrew Soltis referred to a “Laziness Index” for annotators, based on how often they used the symbol “!?”.

Was Capablanca the only world champion to eschew question marks? He did not use them in his main works (My Chess Career, Chess Fundamentals, A Primer of Chess and his book on the 1921 world championship match), although he did award exclamation marks. The only Capablanca annotations with question marks that I could find are in your book on him, in chapters 11-13. These are translations from Soviet magazines, and I wonder whether the Russian-language editors added question marks to moves which Capablanca’s text called poor.

Throughout The Basis of Combination in Chess J. du Mont used no punctuation at all. The same applies to Tartakower and du Mont’s 500 Master Games of Chess and 100 Master Games of Modern Chess. This may be relevant to the exact nature of the cooperation between the two authors, bearing in mind that Tartakower was known for a humorous style which lavished all kinds of punctuation on moves.’

Another case was on pages 15-17 of Chess World, January 1967. The game was annotated by W.J. Geus, but only the punctuation is shown below: 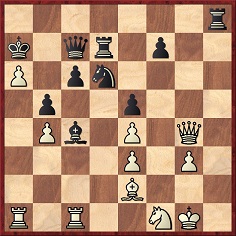 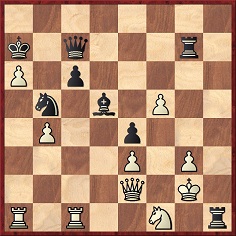 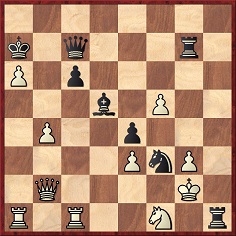 ‘This annotator believes that the difference between the winning move (37 KxR) and the text deserves as many ?s as the printer is likely to tolerate.’

An example of punctuation which is accidentally wrong in a game-score occurs on page 104 of Scacchi (‘Manuale di base’) by Paola Cavallanti (Florence and Milan, 2002): in Capablanca v Spielmann, New York, 1927, 18 axb5 is given two question marks.


The final paragraph of the Introduction to Confessions of a Chess Grandmaster by A. Soltis (Davenport, 1990):

‘And I’m not going to bore you with two pages of sub-variations explaining why 22 b3!? is slightly better than 22 Rc2?! There is entirely too much punctuation wasted today by members of the Hübner-Timman school who will give you reams of analysis to reveal the absolute truth about a game but may not get around to explaining why a move is good, what was in the player’s mind when he played it or how it can help you improve your own play.’


Three exclamation marks at move two were awarded by Reuben Fine on page 58 of Chess Marches On! (New York, 1945): 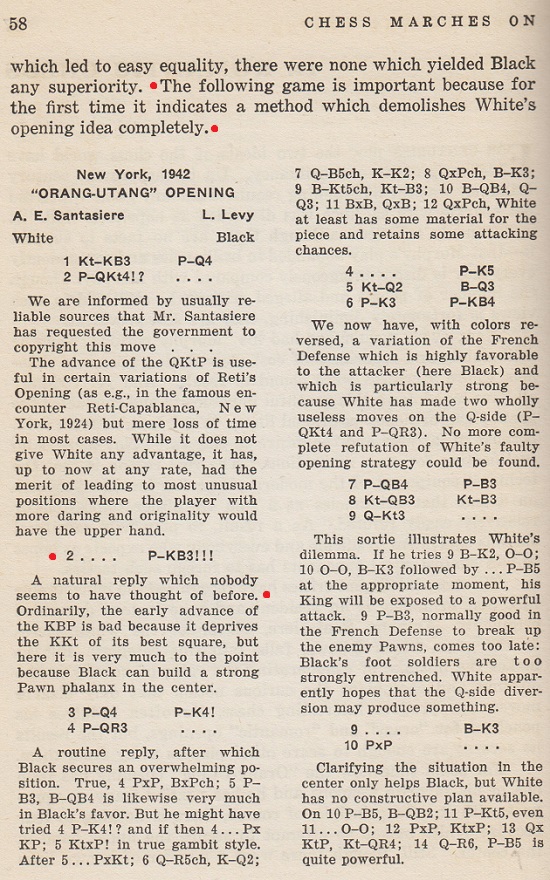 When Fine’s annotations had appeared on pages 8-10 of the January 1942 Chess Review, 2...f6 received only two exclamation marks. 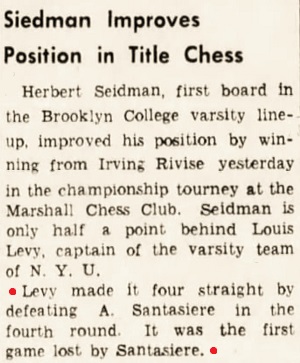 Fine was also incorrect to state that nobody seemed to have thought of 2...f6 before Levy played it in that game. Databases have a loss by Santasiere to Harry Fajans, which, Mr Bauzá Mercére points out, was annotated by Santasiere on page 14 of the January-February 1941 American Chess Bulletin: 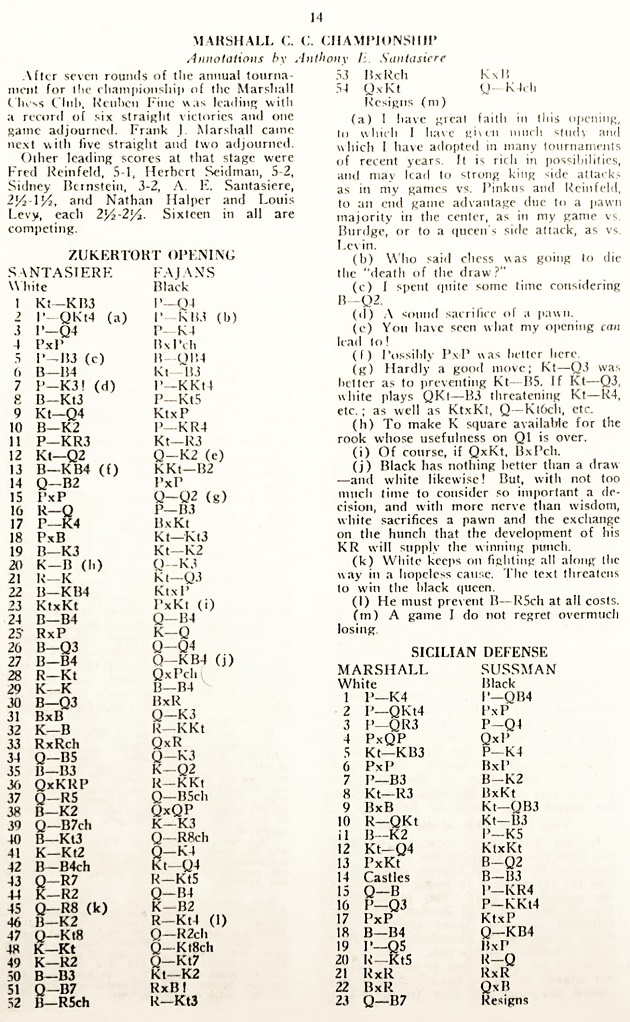 Our correspondent adds that a report on the tournament, the Marshall Chess Club Championship, on page 21 of the New York Times, 13 January 1941 recorded that the Santasiere v Fajans game had been adjourned. He refers too to page 195 of the October 1942 Chess Review, where Edward Lasker annotated a win over Santasiere with 2...f6 in the New York State Championship in Cazenovia, August 1942. The first note mentioned Fine’s January 1942 article.