In Kingpin in 1997 (see too page 285 of Kings, Commoners and Knaves) we gave the following Danish Gambit loss by Marshall against J.P. Hopkins in a simultaneous exhibition:

It is not recorded whether the spectators showered Marshall with anything.

It can be imagined how notorious such a game would have become had it been lost by Capablanca.


There follows another case, the score of which is most peculiar:

This may be regarded as the ultimate case of ‘castling into it’.

Süchting avoided the exchange of queens with 24…Qh5, after which there came 25 Qd5 Qxh2 mate.

Page 195 of the September 1908 American Chess Bulletin quoted from the Australasian:

‘No common commotion was caused among the masters who were playing at Vienna by Herr Tartakower’s attempt to deny the existence in the chess code of the “J’adoube” rule. The preposterous claim had one funny result. Professor Berger, who was paired with Herr Süchting, was so much unnerved by the disturbance that he overlooked a mate on the move. His more stolid opponent at once effected the mate. Thereupon Professor Berger lodged a protest against a loss of which, as he said, the Tartakower-Maróczy incident had been the cause. It seems possible that the equity of the claim was not denied by the playing committee; but the legal force of the claim was not acknowledged; and Herr Süchting was allowed to score the game as a win.’


Avital Pilpel (Haifa, Israel) draws attention to the conclusion of the game between Itzchak Aloni (Israel) and Suren Momo (Mongolia) at the 1962 Olympiad in Varna: 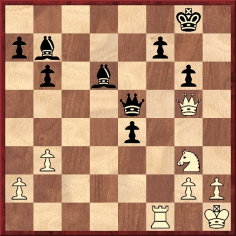