We present some jottings on members of the British royal family from the nineteenth century onwards.

P.W. Sergeant wrote a biography George, Prince and Regent, published by Hutchinson & Co. (London). The book itself was undated, but page 171 of the April 1935 BCM recorded that it had been published in February of that year and had been ‘very favourably received’. Incidentally, among Sergeant’s other (non-chess) books were Rogues and Scoundrels and Liars and Fakers.

On page 74 of the Chess Player’s Chronicle, 1842 a correspondent, ‘H.N., Charter House’, asked: ‘Is not chess an amusement much in vogue with the courtly throng of Buckingham House? and may not her Majesty be numbered among the votaries of Caissa?’ The published reply was: ‘Chess is frequently played at the palace, and not uncommonly by the Queen herself.’

From The Field of 15 August 1874 (page 174), with regard to the Counties Chess Association meeting in Birmingham:

‘… The conclusion of the proceedings was celebrated on Saturday by a luncheon. Lord Lyttelton, the president of the association, occupied the chair, and there was a considerable company of ladies and gentlemen present.

After luncheon, his lordship proposed “The Health of the Queen and the Royal Family”. He said that uneasy lay the head that wore a crown, and even a coronet, and he could not but sympathise with any of the royal family who had not the solace of a game of chess to alleviate this uneasiness. And he had no reason to believe – he feared it was not the case – that any one of the royal family had ever had the precaution and the prudence to learn the game of chess as a solace for the evils of this life.

The Rev. W. Wayte proposed “Success to the Counties Chess Association”. At the outset he referred to what the noble chairman had said, and remarked that he had read somewhere that the present Queen did play chess, and one of the Prince Leopold’s games at chess had been published. His proofs that the Queen played chess were rather amusing. They were contained in a book entitled “Lord Broughton’s Memoirs”. They described how the Queen, before she was married, received a visit from the King and Queen of the Belgians, and after dinner the two Queens sat down to play at chess. There were then four queens concerned, and there was some confusion. Queen Victoria did not know very much more than the moves, and she was advised by a Minister of the Crown – Lord Palmerston – who prompted the Queen in her moves; but for all that she lost the game. (Laughter.)’

The following quote from a contemporary publication was given on page 14 of the January 1889 International Chess Magazine:

‘…the greatest solace the Empress Victoria has in her widowhood is chess – a game she frequently played with the Crown Prince when they found themselves with a leisure hour. The Empress generally travels with a chess board and men.’

‘Her Majesty seldom plays; she enjoys following the games played by the members of her family and after mate has been given she often gives her opinion on how the game should be conducted. All the members of the royal family are skilful players, but Her Majesty is superior to all of them, with the exception of the Empress Frederick, who rarely loses.’

Quotes from the anonymous book The Private Life of the Queen (New York, 1897) were given on page 106 of the February 2005 BCM. Below is the complete passage, from page 94 of the book:

‘King Edward, we are told, is developing an enthusiasm for chess. In that case, says a writer in Tid-Bits, he is only following in the steps of many of his predecessors on the throne ...’

An article ‘Königliche Schachspieler’ on pages 155-156 of the May-June 1907 Wiener Schachzeitung mentions a number of monarchs, beginning with Edward VII.

See also the quote under Edward VIII below.

Page 170 of the August 1912 American Chess Bulletin quoted from the Weekly Irish Times:

‘The King plays a good game of chess, and so Queen Mary presented him on his birthday, 3 June, with a very beautiful playing set in crystal and gold, exquisitely carved, which she purchased in India, and stored away carefully so that it might come as a surprise. The King considers chess an admirable pastime, and encourages his sons to play it.’

‘The London correspondent of a Sheffield paper writes: “The King has lately been taking a keen interest in chess, and has developed into a very good player. His Majesty now never goes anywhere without his board and pieces, as just recently he found that at a well-known country-house where he was visiting there was not a chess-board to be had, and the host had to send to a neighbor to borrow one. All the sons of the King have also learned to play chess at the special wish of their father, who has a theory that it develops instructive constructive ability.”’

From page 80 of the February 1931 BCM, an item concerning S. Reshevsky:

‘The Cincinnati Enquirer makes the astonishing statement that, “when but five years of age, Sammy was honoured by being decorated by King George of England and other European nobility”. We do not know what “other European nobility” may have done; but we certainly have no recollection of His Majesty decorating, or even of setting eyes on, “Sammy”.’

Miss Fatima was interviewed about Sultan Khan in the Bandung Limited television production The Sultan of Chess broadcast by Channel 4 in the United Kingdom on 19 September 1990. She mentioned that she had given some chess instruction to Queen Mary, the wife of George V. (C.N. 6201)

As the Duke of York he was the ‘Royal Patron’ of the Hastings, 1895 tournament. See page xi of the tournament book.

‘Several newspapers recently published the news that a favourite Sunday pastime at Windsor Castle is chess. “Some of the most beautiful and interesting chess men and tables in the world are at Windsor, many of them worth thousands of pounds. There is one Oriental set, each figure of which is made of gold and ivory encrusted with rare and precious stones. The table to match is of exquisite colouring and workmanship, beautifully figured and inlaid. This chess set was used for games between the Kaiser and the late Lord Balfour 35 years ago when the latter, ignoring Edward VII’s hint that the royal visitor should be allowed to win, soundly trounced him!”

King Edward VII was very partial to the game, but King Edward VIII could not play at all. The news comes through that the present Duchess of Windsor, when Mrs Simpson, had one gown very originally trimmed with chess pieces and with buttons fashioned like chessmen. So perhaps the Duke may learn!’

In the November 1937 BCM Koltanowski filled nearly two-thirds of a page (page 545) with a yarn about Reshevsky being mistaken for the Duke of Windsor in a game of tennis.

Earlier, the following appeared on the cover pages of the August 1937 Wiener Schachzeitung: 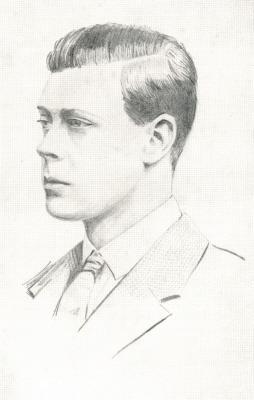 The above pencil sketch of the Duke of Windsor is by one of the chessplayers shown here: 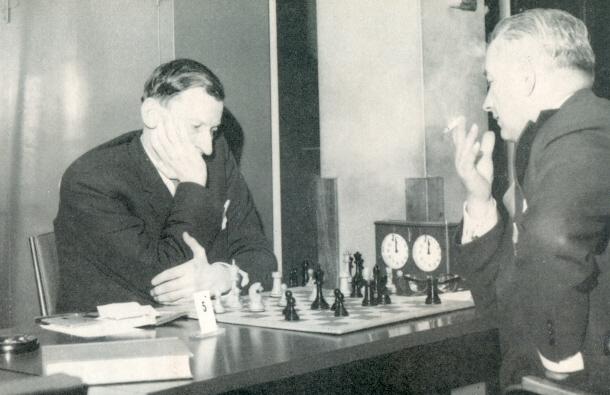 As reported in C.N. 6360, the above two illustrations are from My Way with Polio by Owen Dixson (London, 1963). At the board he was playing White against W.H. Pratten.

There was a detailed report on pages 253-254 of the June 1927 BCM. So far we have found no apposite pictures of either the Prime Minister (Stanley Baldwin) or the Duke of York (the future King George VI).

We are grateful to Nigel Short (Athens) for permission to reproduce a letter from Diana, Princess of Wales (1961-97) which he received following his match against Kasparov in 1993 and which he has recently made public on his Twitter page: