Kasparov, Karpov and the Scotch

We present some background notes on the variation in the Scotch Game played twice by Kasparov against Karpov in the 1990 world championship match. In particular, it will be shown how, 110 years ago, the same line was part of a bitter analytical dispute between the world’s leading active players, Steinitz and Zukertort.

Tarrasch (in The Game of Chess) approved of 6...Qe7, but earlier master comment had been negative. In the English-language book of the Hastings, 1895 tournament, Albin said that it was ‘not good’, the usual continuation being 6...Nd5 (a move which Tarrasch considered unsatisfactory).

Several commentators have called this the ‘Mieses Variation’ apparently because Jacques Mieses occasionally adopted it in the 1890s. But, as will be seen below, Blackburne used it twice against Zukertort in match play in 1881, at which time Mieses’ chess career had barely begun.

Karpov’s choice in the 14th game, 1990. The match book by Kasparov, Geller, Lein and Chepizhny says (page 100) that Karpov’s choice in the 16th game, 8...Nb6, ‘is not new, and had already occurred in tournament play’. That is quite an understatement, given that 8...Nb6 even appeared in Bilguer’s Handbuch in the nineteenth century. It offered the variation 8...Nb6 9 Bf4 Ba6 10 Nd2 Qb4 11 O-O-O Rb8 12 a3 Qa4, which prompted the Chess Monthly to observe that ‘some of the moves for White show more valour than discretion’.

For 9 f4, see Schiffers’ notes to the correspondence game Chardin v Schiffers, given on page 252 of the English edition of the Hastings, 1895 tournament book. Also Deutsches Wochenschach, 1895, page 83. Various spellings of Chardin’s name are to be found.

Here we continue with the old line.

10 Bb2 was also played in the 14th game of a match in London between Blackburne and Zukertort in 1881, a match which Zukertort won with a score of +7 –2 =5. Steinitz’s annotations in The Field were strongly criticized by his enemies Zukertort and Hoffer, who were the joint editors of the Chess Monthly. An acrimonious analytical controversy on the complete set of 14 match games took up countless pages of these and other journals.

This was Zukertort’s reply to Blackburne’s 10 Bb2, and, in a rare instance of harmony, both Steinitz and Zukertort/Hoffer believed it to be Black’s best move. [Gutman did not agree, recommending 10…g6 or 10…f6.] This 14th match game continued (after 10 Bb2 Qg5) as follows:

After a complex battle, White (Blackburne) resigned this concluding match game at move 52. [After 15 Kc2 Gutman states that 15…Nf5 would leave Black with the better game.]

Although many of the above Scotch Game variations still occur in modern games, the great labour of these giants from another century seems to have been virtually forgotten. 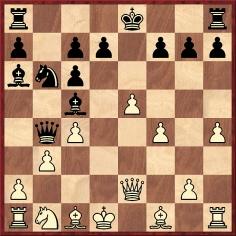 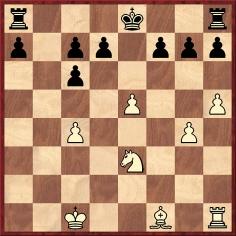