Chess and How to Play It 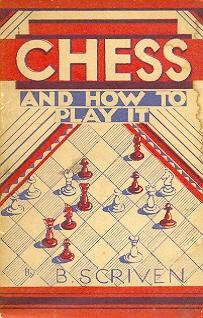 Chess and How to Play It, a 90-page book by B. Scriven, was brought out by Universal Publications Ltd. in the late 1930s. There is no reason to dispute the preface’s avowal that ‘you may not be able to beat Capablanca when you come to the last page’. Some snippets:

‘In chess, however, the sole aim is to attack the opponent’s king.’ (page 32)

‘Of course, another form of drawn game arises when both players are so weakened that neither has the strength to check the other.’ (page 34)

‘Knights can do a great deal of damage which is only apparent when it is done.’ (page 41)

‘Before making a move, note all the consequences.’ (page 49)

‘Of the three stages, the beginner would do well to pay particular attention to the first and last. If he can open well and if he can deliver a subtle check, that will be much more than two-thirds of the battle. In fact, if the game is opened well, the middle game will largely take care of itself.’ (page 50)

Pages 59-60 give the moves of a model game (beginning 1 e4 e5 2 f4 exf4 3 Bc4 Qh4+) without any heading other than ‘The Morphy Opening’, but the same score is repeated on pages 88-89 with more information: ‘An Anderssen-Kieseritzki Game’. It is indeed Anderssen’s Immortal, though Mr Scriven calls it ‘a recent County Championship game’.

‘Bishops also capture in the same way as queens; but they are restricted to diagonal movements.’ (page 28)

Daniël De Mol (Wetteren, Belgium) now mentions to us another book by Scriven, by the same publisher (Universal Publications Ltd.), 100 Chess Problems. CHESS (February 1944, page 65) described it as ‘one of the most extraordinary chess books ever written’. That was not meant as a compliment, the January issue (pages 53-54) having given a sample of half a dozen problems from Scriven’s book. The first of these will be more than enough:

‘We feel we can confidently recommend this book to provide a good one-and-threepence worth of enjoyment. In fact, we haven’t laughed so much for a long, long time.’

We permit ourselves a further brief scoff at B. Scriven’s 100 Chess Problems.

Sometimes there may be a perverse interest in trying to understand what, if anything, Scriven had in mind. For example, this is problem 52, on page 51:

‘As soon as a player take his hand from a piece the move is finished. It can only be altered by the graciousness of the opponent.’

Since Chess and How to Play It contained no publication date we adopted our preferred ‘safety first’ approach and merely wrote ‘late 1930s’ and, in the book lists, ‘circa 1939’. Now, though, our collection contains three editions of Scriven’s parvum opus, all slightly different in format, and the most recent acquisition has an owner’s inscription dated 5 January 1937. D.A. Betts’ Bibliography (page 108) gives the publication date as 1936, and the on-line catalogue of the chess library in The Hague refers to a reprint dated 1939. We do not know how those dates were determined, but they are altogether plausible.

Since writing C.N. 3760 we have acquired a further slightly different edition (the fourth) of B. Scriven’s 1930s book Chess and How to Play It, although the text itself is, alas, still the same. This work has already been referred to several times, but there is no let-up in the quotable gems. Here, for instance, are two ‘rules’ from page 48:

‘If the king is checked, but “check” is not announced, the owner of the king need not attend to it. Though there is no rule on the subject, it is usual to announce “check” when the queen is affected.

If “check” is announced and the owner of the king proceeds to move the king, then realizes that there was no “check” he may take back the move. The same applies if any other piece is moved for the purpose.’

Page 62 has a game which ‘offers many features of special interest’ (such as the author’s presentation of an imaginary mate): 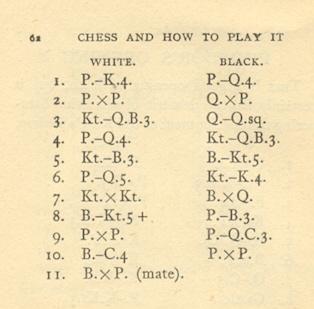