A passage concerning the 1937 Euwe-Alekhine match from page 22 of The Final Candidates Match Buenos Aires, 1971 by Reuben Fine (Jackson, 1971):

‘… Alekhine sent his second, Eliskases, packing and won, while Euwe, who retained me as second, with Grünfeld in the shadows to consult on openings, also lost in the over-the-board complications. Chess remains a one man game.’


Milan Ninchich (Macquarie, ACT, Australia) asks whether a list exists of the seconds of all the men’s and women’s world champions.

‘Who were the seconds of Fischer and Larsen in their 1971 Candidates’ semi-final match? Or did they play in Denver without any team support?’

‘... both players were in Denver without a second, Fischer being accompanied only by Ed Edmondson, USCF official, in charge of arrangements, and Larsen by his wife ...’ The above photograph was on the front cover of the September 1971 Chess Life & Review. 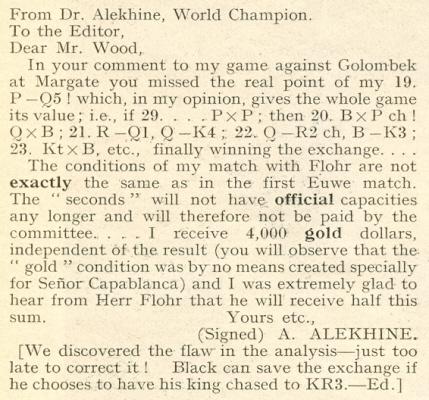 The referenced C.N. item gives the context of the reference by Alekhine to seconds in the second paragraph of his letter.

‘Not having been furnished till recently with the names of the seconds and umpire in the late match between Anderssen and Steinitz, we were unable to state that Messrs Staunton and Hewitt acted as seconds for the former, and Messrs Strode and Boden for the latter. Earl Dartry [sic – Dartrey] was the umpire.’


Roy Henock (Eureka, CA, USA) notes a statement at the Huffington Post website: ‘In 1972, Kavalek was Bobby Fischer’s second in his world championship match against Boris Spassky in Reykjavik.’

In terms of presence in Iceland, is it possible to find, or compile, a comprehensive list of seconds, attendants, representatives and officials, with respect to both Fischer and Spassky? From the front cover of El match del siglo by L.Pachman (Barcelona, 1972)

‘I wrote about my role during the 1972 world championship match in an article on pages 60-68 of the 6/2012 New in Chess. It includes transcripts of two interviews with Fischer.

In brief, I took over the second’s duties during the adjournment of the 13th game after Fischer sent Lombardy away. I was analysing with Fischer alone until the end of the match. We also spent time walking together, swimming and bowling. To my knowledge, there were only three other people (Bill Lombardy, Fred Cramer and Brad Darrach) who had daily contact with Fischer away from the playing hall. I was also busy reporting for the Voice of America. I know that there was a list of the invitees to the closing ceremony; since Lombardy was the official second, I was listed as “Bobby Fischer’s coach – bowling”, although I bowled only three times in my life. However, it enabled my wife and me to sit at the same table with Bobby and Boris Spassky.’

We add a brief excerpt from Lubomir Kavalek’s above-mentioned article in New in Chess (page 66):

‘It was during this game [the 13th] that I started working with Bobby on the adjournment games after he sent his official second, Bill Lombardy, away from his suite. Bobby and Bill were a great pair, but during that night they turned into two strong personalities with two different opinions. The tension was resolved by Lombardy’s sneeze. “I don’t want to get your cold, Bill”, Bobby said and added he wanted to work with me. Bill left quietly.

From that moment on, I analysed just with Bobby till the end of the match.’

‘In an interview after his match against Anand, Carlsen said that he had no on-site seconds in Chennai, although he was in contact via Skype with Jon Ludwig Hammer, Norway’s number two player.

When was the last time that a player had no strong assistant at a world championship match? I am referring to assistants of master level capable of providing technical help, and not “seconds” who were effectively managers dealing with match rules and similar matters.’

Precise records of players’ seconds are often difficult to trace, and no list of the kind requested by a correspondent in C.N. 5657 has yet been built up. For example, for the 1929 and 1934 Alekhine-Bogoljubow matches and, even, the 1927 Capablanca v Alekhine encounter it seems unclear which other players were involved in any capacity.

In response to Mr Barden’s enquiry we can offer a quote from page 135 of the June 1962 Chess Life (the item mentioned in C.N. 8399). An interviewer asked Botvinnik:

‘Why did you decide against having a second in the return match with Tal?’

‘My friend, the master Goldberg, with whom I have worked these past years, refused to be my second this time. He is older than I, and to second is far more tiring than to play. It is exhausting, and I understand his point of view. For example, when I help as a spectator at a chess tourney, I tire faster than if I play myself. And the second has to be alert for the five-hour duration of the game, as well as afterwards, to analyze the adjourned game throughout the night. So before me rose the question: “Should I engage a new second whom I may not have too much confidence in?” How could we successfully work together without a long friendship and mutual respect? Therefore, I decided not to use a second.

Formerly, when I was young, I always played alone. I decided to take the risk and, as you see, it didn’t turn out badly. It is true that in some games I had difficulties because of poor analysis; I made bad mistakes of analysis in the second and 19th games.’

‘Each player was entitled to have a “second” to help in openings, preparations and adjournment analysis. Surprisingly Botvinnik had no-one. Petrosian had the benefit of aid from the very capable grandmaster Igor [sic] Boleslavsky. A second, who is temperamentally suited, can make a very appreciable difference. Botvinnik showed the need in the decisive 18th game, where his adjournment homework was not up to his usual standard.’

On page 129 of the May 1963 BCM Harry Golombek, who was the judge in Moscow, wrote of Botvinnik:

‘He has no official second here whereas Petrosian has the redoubtable Boleslavsky as his second.’

Other quotes on this topic will be gratefully received.


Page 343 of The King by J.H. Donner (Alkmaar, 1997) attributed to Fischer a remark which requires verification:

‘Who is so strong that he could help me?’

Donner’s article, ‘Seconds’, was originally published in the 7 November 1981 issue of De Volkskrant and is also given on pages 352-353 of the paperback edition of The King (Alkmaar, 2006).