Which chess masters have been depicted in silhouette form? Below is the front cover of the Russian edition of Capablanca’s autobiography My Chess Career (Leningrad, 1924): We also drew attention to the Capablanca silhouette in C.N. 2573.


Yakov Zusmanovich (Pleasanton, CA, USA) draws attention to the front cover of Életem, a sakk by A. Lilienthal (Budapest, 1985): ‘On the dust cover of the tenth edition of Modern Chess Openings (London, 1965) authored by Walter Korn and Larry Evans but mainly by the latter there is a silhouette of a chessplayer studying a board. He is not identified but does, in my view at least, resemble Evans.’ Calle Erlandsson (Lund, Sweden) draws attention to the front cover of V.L. Vasiliev’s book Shakhmatnye Siluety (Moscow, 1961). Although it features the silhouette of a chessplayer, the six masters accorded a chapter each (Petrosian, Korchnoi, Simagin, Smyslov, Tal and Ragozin) are illustrated by caricatures, not silhouettes.

The picture below was reproduced in C.N. 2740, from the Dizionario enciclopedico degli scacchi by A. Chicco and G. Porreca (Milan, 1971): Our thread began with the question, ‘Which chess masters have been depicted in silhouette form?’ but has occasionally strayed into the more general field of chess-related silhouettes. Although we therefore do not plan to reproduce all possible specimens, below, courtesy of Jonathan Hinton (East Horsley, England), is the front cover of the book Chess Panorama by William Lombardy and David Daniels (Radnor, 1975): 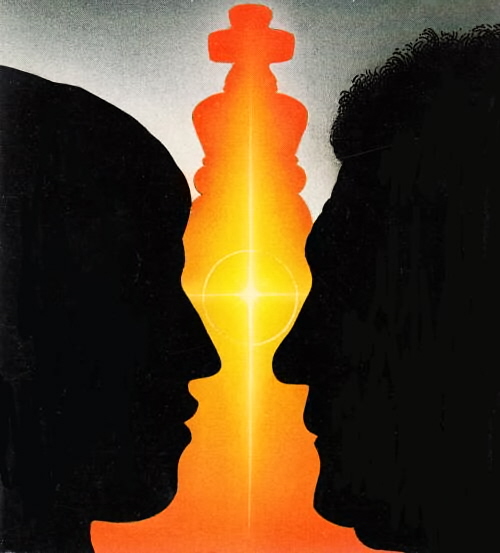 
A new book about the world champion is Magnus Carlsen Nappulasta kuninkaaksi by H. Torkkola (Helsinki, 2014):


The inside covers of Schaakbrevier by Joachim A. Frank (Rotterdam, 1980):

A silhouette of Kasparov and Karpov was often published in connection with their 1990 world championship match. Below, for instance, is the heading to an article ‘Pure hatred as Capitalist King meets Party Pawn’ by Andrew Stephen on page 13 of the Observer, 7 October 1990 (C.N. 9345):

The front cover of Frauen am Schachbrett by Regina Grünberg and Gerd Treppner (Hollfeld, 1991):