The following position (Black to move) is given on page 42 of La Revista de Ajedrez (Havana) of 27 February 1889. Mackenzie (White) was offering a rook to an unnamed pupil. The game was played in New York ‘during the past year’.

Examples of that most attractive of finishes, the single bishop mate, are: a) N.N. v Pillsbury (complete score unavailable); b) Troitzky’s composition, and c) the ‘Pardee v Rubinstein’ position from S.S. van Dine’s fictional The Bishop Murder Case (New York and London, 1929). A middle-of-the-board specimen appeared in L’Italia Scacchistica in 1911 and was reproduced in a number of contemporary magazines (e.g. BCM, October 1911, page 372, and Deutsches Wochenschach, 20 August 1911, page 306):

This position is from a game between R.J. Fischer and J. Witeczek, simultaneous display, Detroit, 9 February 1964:

Another position that comes to mind is on page 131 of the March 1926 BCM. It was from a skittle game, and the players’ names were not specified.

A further specimen, from The Brilliant Touch in Chess by Walter Korn (see page 73 of the 1966 Dover reprint):

The above-mentioned study by Troitzky can be found on, for instance, page 90 of Test Tube Chess by A.J. Roycroft (London, 1972). Below is an item from page 55 of the March 1929 American Chess Bulletin: From the above-mentioned edition of van Dine’s book comes this picture: 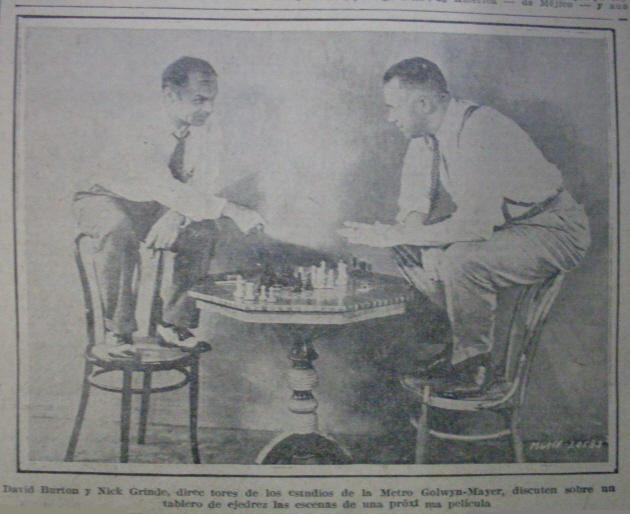 The caption states that two Metro-Goldwyn-Mayer directors, David Burton and Nick Grinde, are discussing scenes from a film. We note that the two men co-directed the 1930 production The Bishop Murder Case (see C.N. 5948 above).

‘A photograph showing Basil Rathbone, David Burton and Nick Grinde gathered around the same board as in C.N. 6099 appears on page 261 of the May 1979 issue of Chess Life & Review with the following caption:

“Basil Rathbone, before his series of film portrayals of Sherlock Holmes, with crew members discussing a scene in The Bishop Murder Case, in which he played supersleuth Philo Vance.” 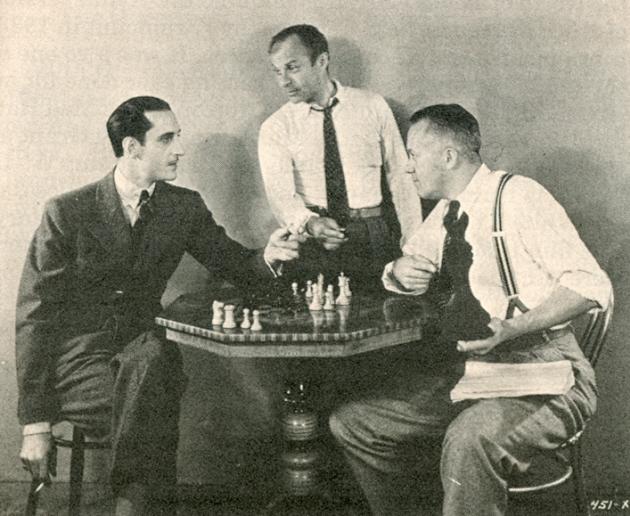 It comes in an article entitled “Chess in the Cinema: Films of the Thirties”, one of a series of articles by Frank Brady which appeared in the magazine in 1979, and it discusses the film in some detail.’

A photograph of Alekhine with the novelist was given in C.N. 5126 from page 129 of the July-August 1929 American Chess Bulletin:

The famous win by Pillsbury (Black):

Only these concluding moves are on hand, but in the hope of stimulating further probing we summarize here the current state of knowledge/ignorance concerning this game. No precise information is available on the opponent’s name, the date or the venue. Page 115 of Queen Sacrifice by I. Neishtadt (Oxford, 1991) stated that it was played in a blindfold simultaneous display. Page 73 of Blunders and Brilliancies by I. Mullen and M. Moss (Oxford, 1990) claimed that it occurred in a simultaneous exhibition in the United States in 1902, whereas page 253 of Harry Nelson Pillsbury American Chess Champion by Jacques N. Pope (Ann Arbor, 1996) reported that the occasion was a knight odds game in 1899 and that the position appeared in the Literary Digest of 25 November 1899.

It seems that chess periodicals of the time were inattentive to Pillsbury’s unique combination. Indeed, the first instance we have found so far of the position being given star billing in a chess magazine comes after Pillsbury’s death, i.e. on page 16 of the January 1907 BCM:

‘Mr W.E. Napier recently gave in his column in the Pittsburgh Dispatch (USA) the following diagram which illustrates Pillsbury’s pet position. The play is so piquant and the finale so charming that we are not surprised to learn that the position was a favourite with Mr Pillsbury. We have, of course, seen text-book examples of mate with a single bishop, but we do not recollect having before met with a specimen from actual play. Mr Napier says:

‘There was nothing on the chessboard that used to amuse Pillsbury so much as the appended position which occurred in one of his simultaneous exhibitions. I have seen him show it repeatedly, with infinite relish for its humour. It is the sort of hair-breadth escape that he, as, indeed, all master players, would contrive in exhibition play. He chuckled more over this situation than anything he ever “brought off”, and was always fond of talking about the career of his ‘lone bishop’”.’

If the position arose shortly before its appearance in the Literary Digest of 25 November 1899 this suggests a game from Pillsbury’s tour of the United States that autumn. In case readers suitably placed can undertake research in the local newspapers, we therefore give below the dates of Pillsbury’s displays during the first part of that tour, as gleaned from the final two issues of the American Chess Magazine, October-November 1899 (pages 158-160) and December 1899 (pages 233-235):

‘On 17 November 1899 Pillsbury visited Allentown, Pennsylvania. This information is from the chess notebook of Ludwig Otto Hesse, one of the local players who participated. Hesse does not record the result of the exhibition but does include a game he played with Pillsbury before the display. Both played blindfold, and the game lasted 15 minutes.’

When the Pillsbury position was given on page 25 of the book Schach ist schön, Schach bringt Freude! by H.-W. von Massow (Berlin, 1940) it was accompanied (on page 24) by the following specimen of a lone bishop administering mate:

No other particulars were provided, and we do not recognize the position from other sources.

The book contained light text with much sloganeering and a glut of exclamation marks. It was published by the Verlag der Deutschen Arbeitsfront and featured a swastika on the title page.

The Pillsbury game ending was printed under the title ‘An Odd Mate’ on page 208 of the December 1901 issue of Checkmate, with this introduction:

‘The following curious mate occurred in a game of Mr Pillsbury’s recently played in Philadelphia, in which he gave the unusual odds of knight and move. Black’s position is desperate, but he lays an ingenious trap into which White, overlooking the unique mate, neatly falls.’

If the information in the Literary Digest (see C.N. 2910) and this reference to Philadelphia are accurate, the date of the game can almost certainly be narrowed down to the first three weeks of October 1899 or 9 November 1899. We note that the text is barely different from what appeared on page 19 of the Chicago Tribune, 3 November 1901: Details about the game, including the full score, are still sought. C.N. 2910 mentioned that the finish had been published in the Literary Digest, 25 November 1899.

There are discrepancies regarding black pawns, and the initial moves 1 Qh4 Qf7 are not indicated.