Below is an article by G.H. Diggle which was originally published in the October 1977 Newsflash and is on page 27 of the anthology Chess Characters (Geneva, 1984):

‘Zukertort’s tremendous tournament victory of London, 1883 (first with 22 points out of 26 and three clear points ahead of anyone else) is as well known as his famous win against Blackburne in the sixth round of the Tournament, Zukertort having already started off with five successive wins. What is not so well known now, and what was never discovered then until months afterwards, was that in the fifth of these wins, against Rev. A.B. Skipworth, Zukertort had on his 22nd move committed a disastrous blunder and his opponent never saw it. The position was: 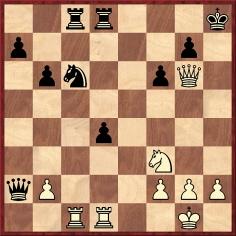 Here Zukertort (a pawn up) played 22...Q-K3?? and Skipworth replied 23 R-Rl?? whereas 23 N-N5 would have mated or won the queen in two moves. Amazingly, though the Tournament Room was crowded with pressmen and “strong lookers-on”, “no dog barked or night-owl screeched” – more incredible still, Zukertort himself (who annotated his own games in the Book of the Tournament) “missed it” again, passing over both “howlers” without even an “?”. But finally, many months later, an obscure Badmaster named Mr Marks, who was then Secretary of the Athenaeum Chess Club, and had purchased the Tournament Book, made the “chess scoop” of his life and “informed the Press”, clearly demonstrating Uriah Heep’s claim that while “great scholars are often as blind as a brickbat, us ’umble ones has got eyes in our ’eds”.

Had Skipworth won this game, what would have been the effect on Zukertort, a fragile man and “a bag of nerves”? Thrown off balance after a magnificent start by an absurd loss against one of his weakest opponents, would he ever have won that brilliant game against Blackburne in the very next round? And Skipworth? He retired through ill-health halfway through after three wins and nine losses. This was criticized; but the trouble was that he was Rector of the Lincolnshire village of Tetford, six miles from Horncastle and 150 from London, and he could not find a cleric to stand in for him on Sundays. Consequently, during the Tournament he had to go to and fro at weekends, getting up at the crack of dawn on Monday mornings, driving by horse and trap to Horncastle, proceeding by slow train via Woodhall Junction, Boston and Spalding to Peterborough, and thence to King’s Cross to be ready for his game at the Criterion, Piccadilly at 12 noon. This, on top of the strain of tournament play, proved too much for him. At his best (the late J.H. Blake once told the BM) Skipworth was “hot stuff” and both he and Thorold “had a magnificent eye for a combination”.’

Here is the game as it appeared on pages 8-9 of the tournament book, with Zukertort’s notes: 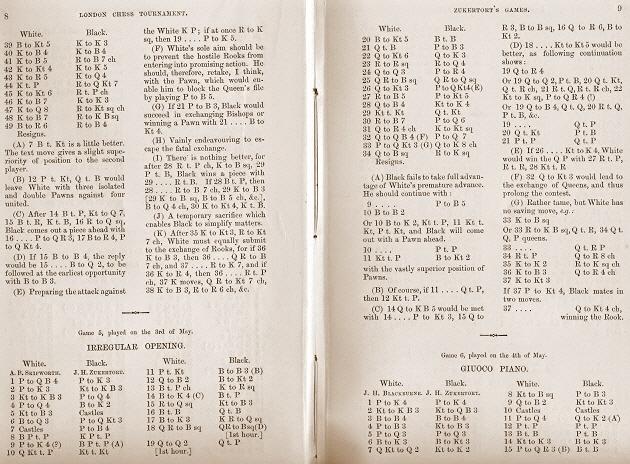 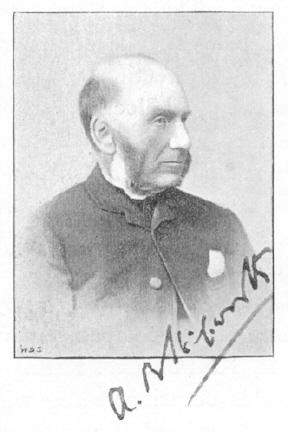 The ‘23 Ng5 affair’, as we are calling it, was discussed by W.H. Watts in an article entitled ‘Some Historic Chess Blunders’ in the Christmas 1914 issue of The Strand Magazine. The article was reproduced on pages 107-109 of the January 1915 Chess Amateur, and a lengthier version was published on pages of The Year-Book of Chess 1915 and 1916 (London, 1917), which Watts co-edited with A.W. Foster. From the Year-Book: 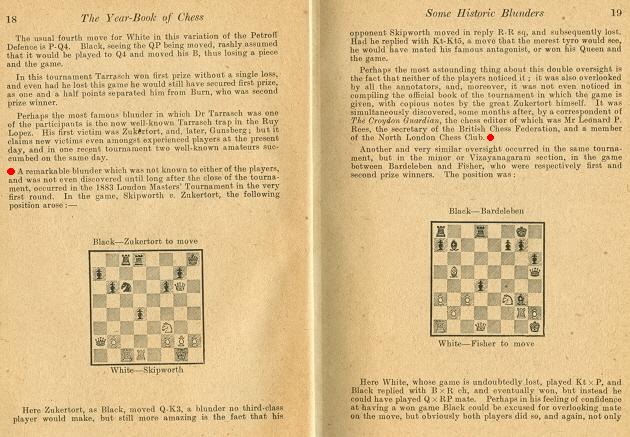 We have found this item on page 248 of the 2 January 1884 issue of the Chess Player’s Chronicle: 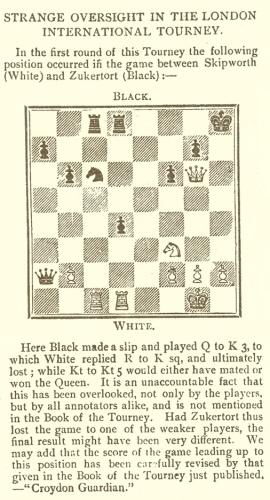 In the light of G.H. Diggle’s reference to ‘Mr Marks’ it is particularly relevant (though also puzzling) to note that a subsequent issue of the Chronicle (16 January 1884, page 258) had a letter from Edward Marks (using his obvious pseudonym, ‘Skram’) which discussed Fisher v von Bardeleben (see pages 227-228 of Chess Facts and Fables) and Skipworth v Zukertort but made no claim for himself regarding the discoveries: 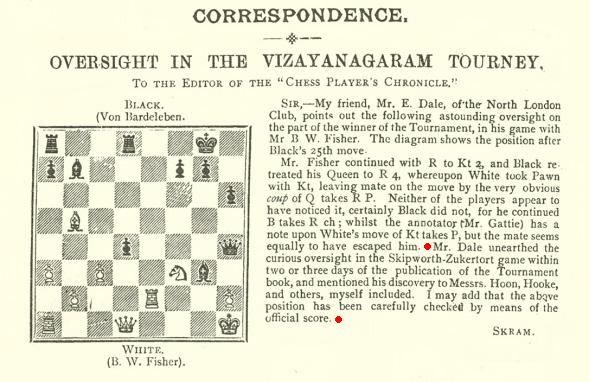 Further information is sought concerning W.H. Watts’ statement that the possibility of 23 Ng5 ‘was also overlooked by all the annotators’ of the time (i.e. before the tournament book appeared). Page 65 of the November 1883 Chess Monthly announced that the book would be available by the end of that month. (It may be significant to add that page 72 of the same issue reported that Zukertort had sailed for the United States on 20 October.) Where was the Skipworth v Zukertort game published between the date on which it was played (3 May 1883) and the end of November 1883? We ask that question not merely to verify Watts’ words ‘overlooked by all the annotators’ but also, and above all, to ascertain whether the game-score published in any earlier sources was identical to what appeared in the tournament book.

According to the tournament book, the preceding play ... 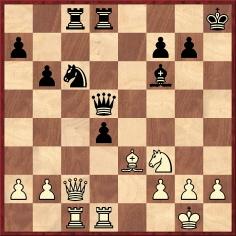 Finally for now, we draw attention to an important footnote on page 124 of The International Chess Tournament London 1883 in letters by William Steinitz introduced and edited by Harrie Grondijs (Rijswijk, 2010). It mentions a report in the New Orleans Times-Democrat of a claim by Zukertort that the tournament book was wrong:

In the second line [1883] should read [1884]; we should particularly like to see those Times-Democrat columns and present them in a future C.N. item.

Much further investigation of the 23 Ng5 affair is clearly needed.

The game-score as given in the tournament book: