After White’s tenth move Teichmann remarks, ‘White’s game soon becomes altogether hopeless, and the tragi-comic conclusion seems a just punishment for having missed the right moment to resign’. A punishment for Müller but a treat for us. A smothered mate is unusual enough, but rarer still is a king choked not by pawns but by pieces.

The position below arose after 40 moves in a game between S. Levitzky and M. Chigorin at a tournament in Moscow on 1 October 1899:

This smothered mate often occurs through a familiar manoeuvre involving a different kind of queen sacrifice:

When the king is not mated in the corner, the winner may need help from an advanced pawn:

One of the great beauties of chess is the way a theme may lend itself to countless variants. In the next example, taken from the BCM of June 1920 (page 171), there is a pin on the white queen. The players’ names are not recorded.

Finally, the smothering manoeuvre may merely be the preface to a different winning motif, such as the so-called corridor mate:

Won by Edmond Gestesi in Paris.

‘In scope and contents this book is so much out of the ordinary run that it can fairly be termed unique. It contains 248 examples of Bird’s Opening, selected from over a century of tournament chess …’

We wonder whether ‘unique’ is also an appropriate term to describe the smothered mate in a game given on page 100 of Robinson’s book: White, to play, gives mate in how many moves? Solution.

From page 11 of Wiseman’s Chess Primer by Paul Wiseman (Rothersthorpe, 2011): 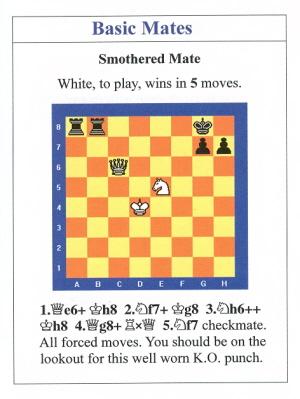 From Christian Sánchez (Rosario, Argentina) comes a combinational finish by Samuel Rosenthal which was given in the chess column of Gastón Pedro Dubox on page 52 of the 11 March 1939 issue of Caras y Caretas: This specimen is supplied by Eduardo Bauzá Mercére (New York, NY, USA), from page 2 of the Washington Post, 28 May 1916: