‘Is it known when Verdoni died, or where he was buried? Jacob Sarratt made a pertinent remark on page xxii of the first volume of his 1808 work A Treatise on the Game of Chess. Referring to the Traité des Amateurs, he commented:

“The principal players who assisted in compiling that treatise were Carlier, Leger, Bernard and Verdoni. The latter died at his apartments in Panton Street about four years ago; he was incontestably a player of the first order.”

This could be taken as indicating that Verdoni died about 1804, but it assumes that Sarratt wrote those words in 1808, the year his treatise was published. Is there any other evidence of Verdoni’s existence in England after, say, the year 1800?

Panton Street lay in the parish of St Martin in the Fields, Westminster. It is not far from Parsloe’s in St James’s Street, where Verdoni had moved the pieces for Philidor in a blindfold game on 20 June 1795. He was described in a newspaper report as “Mr Vardoni”; see page 37 of my 2014 book Historical notes on some chess players.

George Walker referred to him as “Signor Verdoni”, and it has been suggested that he was Italian by origin. The chess world knows so little about the life of this important player that his forename has not even been determined.’

Below is the entry on Verdoni on page 562 of the Dizionario Enciclopedico degli Scacchi by A. Chicco and G. Porreca (Milan, 1971): 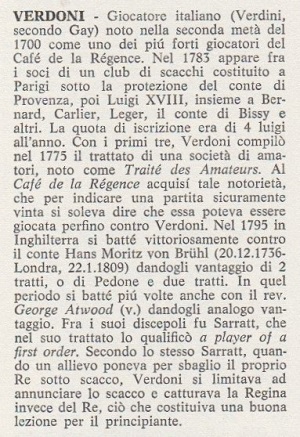 In reply to a correspondent, ‘L.D.’, the chess column by Löwenthal on page 14 of the Era, 23 November 1862 indicated that Verdoni was French:

Jerry Spinrad (Nashville, TN, USA) points out that a death-date for Verdoni (25 January 1804, in London) was given in The Georgetown Chess Club Almanack for 1868 (Demerara, 1868) and that a footnote described him as ‘a player nearly equal to Philidor’: 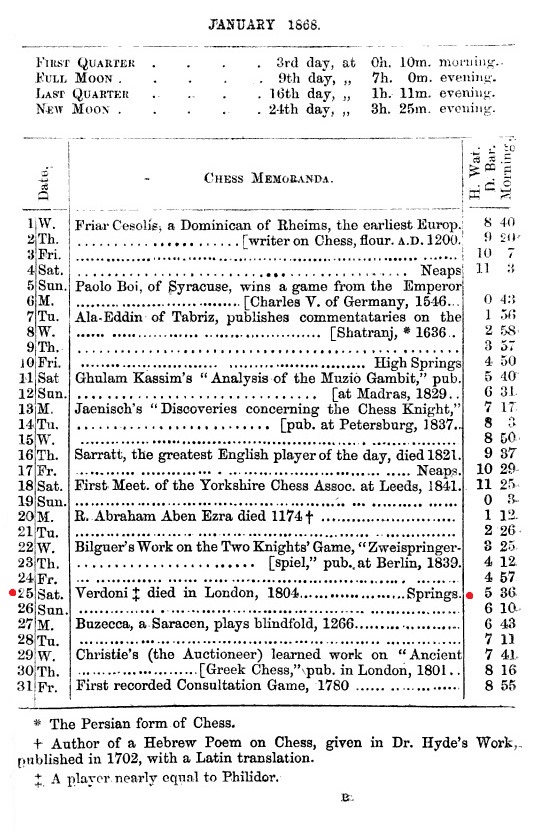 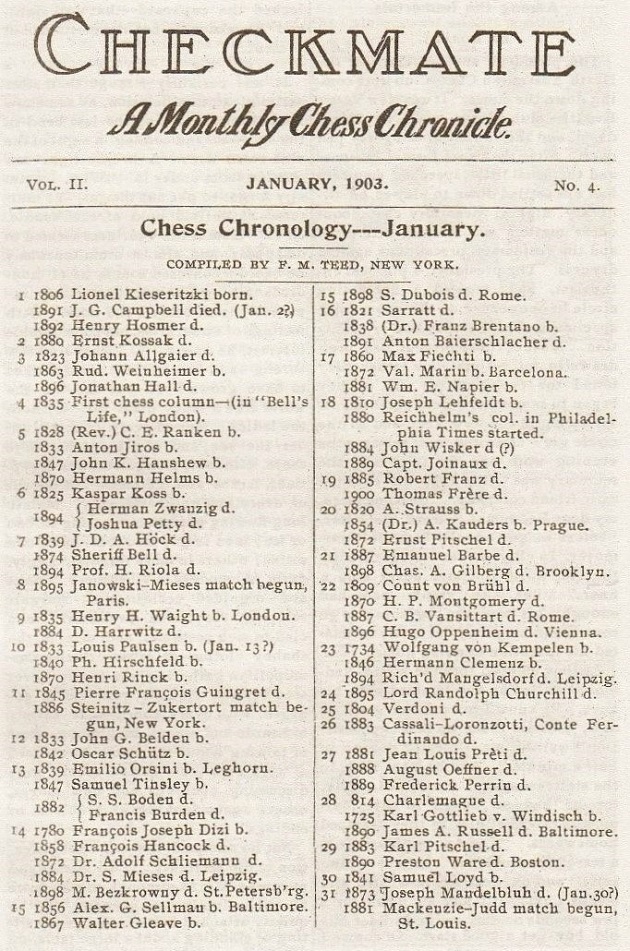 John Townsend points out that both The Georgetown Chess Club Almanack for 1868 (C.N. 9570) and the list by F.M. Teed on page 73 of the January 1903 Checkmate (C.N. 9574) gave the death-date of J.H. Sarratt as 16 January 1821, whereas it is known from contemporary newspaper reports that he died in November 1819. Consequently, the unsourced statement by both publications that Verdoni died on 25 January 1804 cannot be taken on trust, and further investigation is required.

‘C.N. 9565 mentioned Sarratt’s remark that Verdoni died in Panton Street, London. Below is a document (reference WR/A/035) in the London Metropolitan Archives from the Westminster Quarter Sessions records regarding enrolment, registration and deposit:

“In pursuance of the powers vested in me by his Majesty’s Proclamation for registering of Aliens, dated at Saint James, the Fifth day of July One Thousand Seven Hundred & Ninety Eight, I do hereby grant to Carmine Verdone an Alien, A Provisional Licence to reside in this Kingdom Viz. in the County of Middlesex for one Month from the date hereof.

Given under my hand & seal at Marlboro’ Street in the County of Middx. this 23d day of July 1798.

These are to certify the above Carmine Verdone is an Italian and has Lodged with me from the 15th of Decr. 1796 to the present time 30th July 1798.

I have also found the following entry in the burials for March 1804 in the register of the parish of St Martin in the Fields (which includes Panton Street):

“M” denotes an adult male, and Carmine is a male forename in Italy. It remains to be shown whether the “Carmine Verdone” referred to by John Maynard in 1798 and the “Carmine Vendane” in the 1804 register were indeed the chessplayer Verdoni.’

‘I have been trying to add to the facts known about Carmine Verdone which were discussed in C.N. 9595, with the increasing feeling that my conclusion beginning “It remains to be shown ...” is rather too cautious. Although there has been no proof that Carmine Verdone was the chessplayer, it seems almost inconceivable that such is not the case, taking into account the extreme rarity of the surname in London, the Panton Street link between his lodgings and the “apartments” referred to by Sarratt in the same street, and the burial in the year 1804.

However, it has not so far been possible to find further mention of him either in London or national records.

As regards Paris, where Verdoni is stated to have resided prior to his arrival in London, there was a mandolin composer and teacher by the name of Verdone, sometimes referred to as “Signor Verdone”. In the Calendrier Musical Universel, Volume IX, Paris, 1788, page 317 contains a reference to him in which the Café de la Régence is given as his contact address:

As the Café de la Régence had such strong associations with chess, and various writers state that Verdoni regularly played chess there, I would like to establish whether Verdone the mandolin musician was, in fact, Verdoni the chessplayer, and I would welcome any assistance in building on this possible clue, especially from French sources.

The musician was Italian and had previously been in Lyons in 1768, as is affirmed on pages 45-46 of Paul Raymond Sparks’s A History of the Neapolitan Mandolin, Volume 1, 1989 (submitted for the degree of Doctor of Philosophy to The City University). There is also an advertisement for his services (published in the Affiches de Lyon, 14 April 1768):

The author also notes that Verdone was later in Paris and mentions him on page 35 as one of the “Maîtres de Mandoline” in Paris, 1788-89.’