This position (White to move) comes from the 1942 correspondence game Wade v Bennett:

This game (for which page 29 of Chernev’s Combinations The Heart of Chess incorrectly put ‘London, 1943’) gives rise to many complications.

Walter Korn provided the complete game on pages 162-163 of the July 1943 CHESS. The additions within brackets in the game-score are by us.

Bob Wade (London) has informed us that, as stated on pages 27-28 of Neishtadt’s book on the Queen’s Gambit Declined (Moscow, 1967), the entire game was already known from analysis by Kopayev and Chistyakov dating back to 1938 (exact source not given by Neishtadt). Below is part of Neishtadt’s account, of which an English translation has kindly been supplied to us by Ken Neat (Durham, England):

‘How then should Black defend against the threat of 18 Rxg4?

But perhaps the retreat of the bishop to h5 was not a mistake. Let us analyse other replies by Black, apart from 18...Bg6, which leads to a catastrophe.

But instead of 21...Nxh5 the “quiet” move 21...Qd5! gives Black the advantage. Therefore the old recommendation of Kopayev and Chistyakov should be considered: 19 Rc1, and if 19...Bg6 20 Qxg6, as in the variation examined earlier.

Thus Kopayev and Chistyakov convincingly showed that the immediate manoeuvre of the bishop to g6 is impracticable. And yet against the threat of 18 Rxg4 there is a defence. In the game Boleslavsky v Moiseev (Odessa, 1949) Black went in for this entire variation, which was considered unfavourable, and after 18 Rh3 he made the unexpected move 18...Qb4! By attacking the rook and saving the queen from the terrible fork with which the combination of Kopayev and Chistyakov concluded (Nxf7+), Black completes the bishop manoeuvre: 19 Rhe3 Bg6 20 Qb3 Qxb3 21 Bxb3 Rfe8. Black has avoided the dangers. After 22 Kf1 Kf8 the players agreed a draw.

It may be concluded that the seemingly formidable move 17 Rg3 is not so fearsome.’

Neishtadt also referred to Kopayev and Chistyakov’s 1938 analysis when giving the Qxg6 line on pages 129-130 of Queen Sacrifice (Oxford, 1991). [Walter Korn, for his part, returned to the Wade v Bennett game, mentioning the Kopayev and Chistyakov analysis, on page 106 of Chess Review, April 1967.] In both his above-mentioned books Neishtadt noted that the Qxg6 line subsequently occurred in the game Marović v Chagan (World Student Team Championship in Cracow, 1964). On page 96 of the Lachaga book on Moscow, 1935, Becker said that the 22 Nxf7+ 23 Nxd6 version was also played in Maccioni v Letelier in Santiago de Chile, 1945 and that the 1964 game brought White a brilliancy prize.


On 28 July 1995 we received the following from Robert Wade: 
Regarding the Wade v Bennett correspondence game (1942) and the prior appearance of 19 Qxg6 in analysis, below is an article on pages 183-184 of the September 1939 Chess Review: 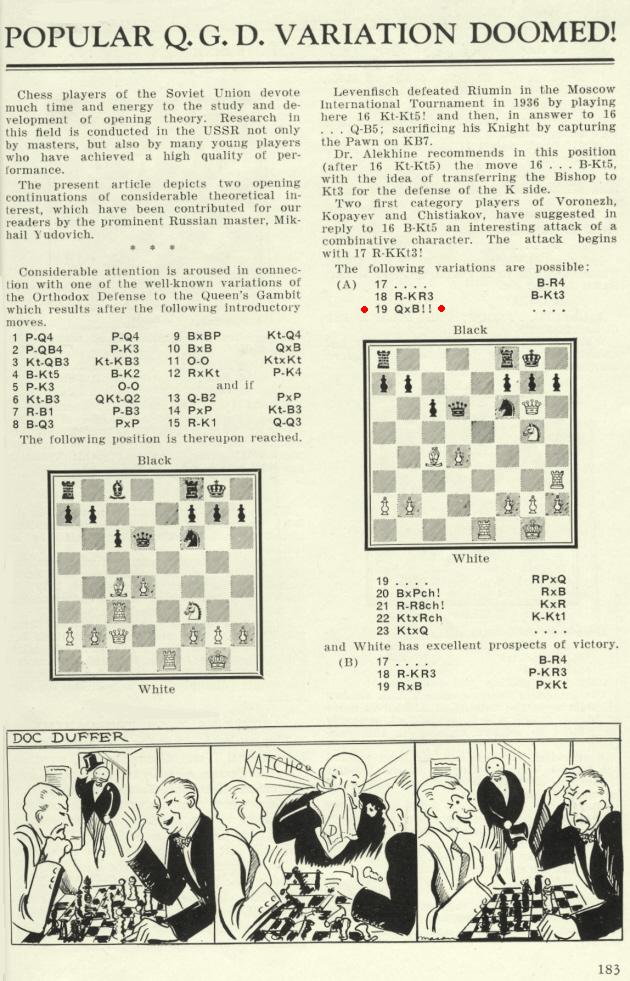 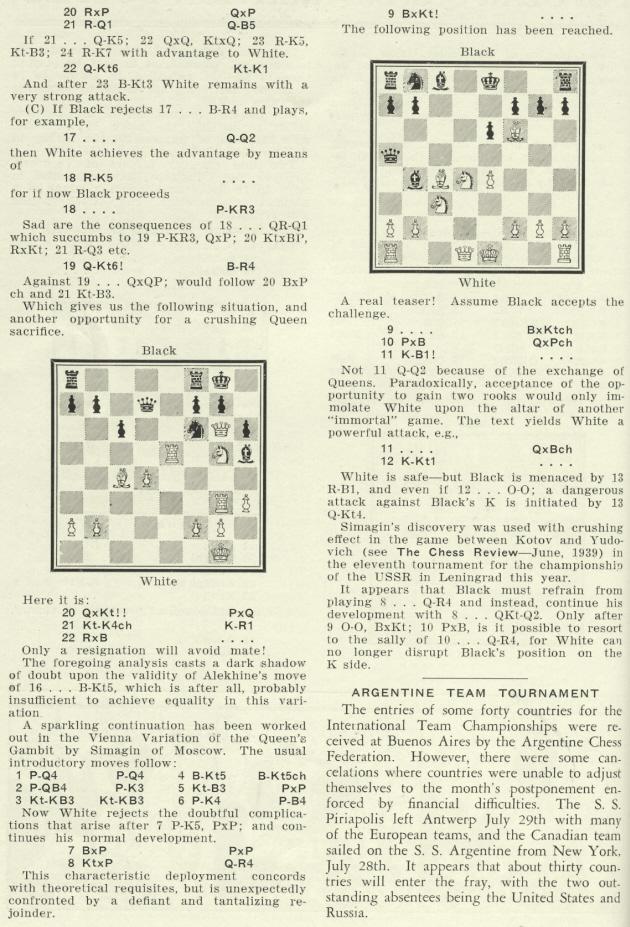 
Afterword: For further information on the Qxg6 sacrifice see pages 214-219 of Kings, Commoners and Knaves, as well as The Fox Enigma and Marshall’s ‘Gold Coins’ Game.