‘Nothing is harder than to win a won game’ is a famous maxim, attributed to various writers. It appeared on page 9 of Schach-Aphorismen und Reminiscenzen by A. Albin (Hanover, 1899):

A curiosity is that although it is customary nowadays to refer to ‘Adolf’ Albin, the title page and Introduction of the above work (Albin’s only chess book, and a self-publication) gave his forename as Adolph.

The description of the above work as ‘Albin’s only chess book’ is incorrect. Writing about Manolache Costache Epureanu (1823-80) in C.N. 5580, Olimpiu G. Urcan (Singapore) noted, inter alia, this contribution to chess by Epureanu:

‘His assistance to Adolf Albin to publish his primer in Romanian Amiculǔ’ Joculǔ’ de Schach. Theoreticu şi Practicǔ (Bucharest, 1872). On the front cover Albin made it evident that there was a special relationship between them, as he dedicated his work to Epureanu.’

Inscription by Albin in our copy of Schach-Aphorismen und Reminiscenzen

‘This game is a further illustration that, as Steinitz says, “the most difficult part of chess is to win a won game”.’

Can other early instances of the remark be found, in the writings of Steinitz or anyone else?


So far, the earliest known first-hand occurrence of the saying ‘Nothing is harder than to win a won game’ is on page 9 of Schach-Aphorismen und Reminiscenzen by A. Albin (Hanover, 1899): ‘Nichts ist schwerer als eine gewonnene Partie – zu gewinnen.’ It received the page to itself: 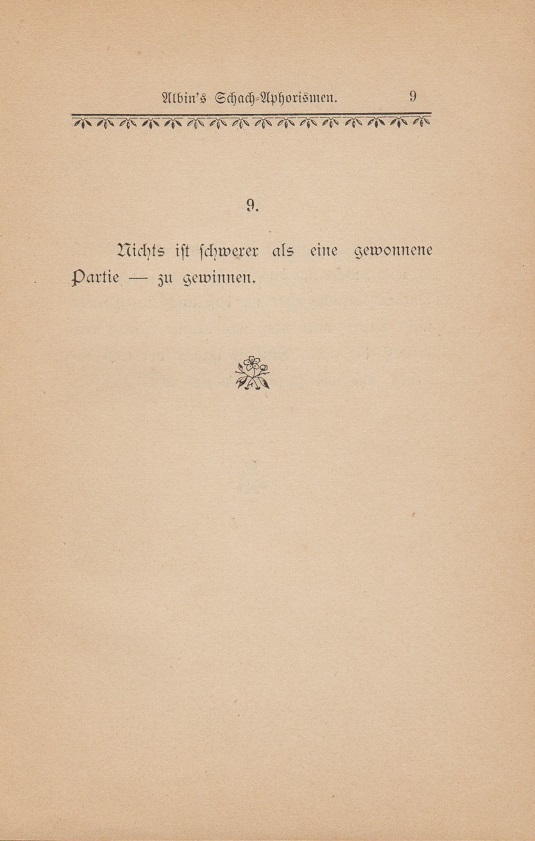 The English version was on page 220 of Checkmate, July 1903, in a feature entitled ‘Albin’s Aphorisms’, whereas the previous year (November 1902, page 30) the Canadian magazine had referred to ‘Tarrasch’s well-known saying that nothing is harder than to win a “won game”’.

As mentioned in C.N. 2424, the maxim has been attributed to a number of writers. They include Lasker, as shown by page 179 of Master Chess by Lodewijk Prins (London, 1950): 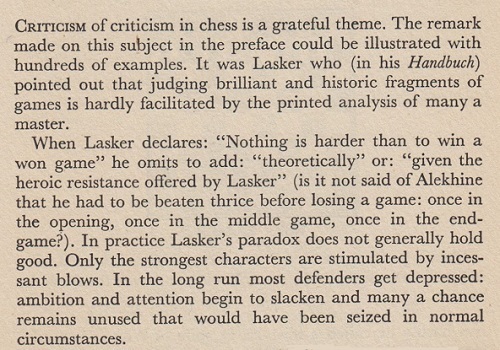 Two further sample pages from his 1899 book on chess aphorisms:

Courtesy of Olimpiu G. Urcan we add from his collection this fine version of a familiar portrait of Albin: