An interesting article appears in the October 1982 issue of the Yugoslav magazine Šahovski Glasnik (pages 363-364).

We learn that after the London Rules for world championship challenges had been agreed in 1922, Capablanca went to Monte Carlo ‘to relax’. Also there at that time was Erich Hagenlocher, a German from Stuttgart who in the 1920s was the unchallenged billiards champion of all cafés and casinos in Europe. Since each of the champions could play the other’s game, somebody had the idea of a contest between them. Billiards came first, with a match for the first to reach 100 ‘Karambols’ (forgive our lack of billiards terminology) with Capa given a start of 75 and the right to play first. The Cuban in fact reached 94, but then Hagenlocher struck back with a run of 23, thereby gaining victory by 100 to 94.

And so it was that the first, and no doubt last, chess-billiards double-bill ended in a 1-1 draw.


We hasten to invite readers to draw a thick red line across C.N. 318. It now appears that Capablanca never played any such chess-billiards match.

Gunter Müller (Bremen, Germany) has sent us a considerable amount of information, based on the writings of Hans Klüver, that indicates that the Capablanca-Hagenlocher episode is pure fiction. Apparently Die Welt published the story as a joke towards the end of the 1950s. As often happens, a subsequent correction/confession was ignored and the account was republished elsewhere in German sources (Mr Klüver gives chapter and verse). Šahovski Glasnik, our source, may have picked it up from one of the German versions.

We learn that the original version of the hoax had it that the game was played on 31 December 1922. There are some discrepancies over the billiards, with the German versions saying that the run of 23 that Hagenlocher achieved brought him up to 92, and that it was Capa who won, by 100-92. Information on Hagenlocher would be welcomed – did he exist? The chess game itself, our German colleagues tell us, was actually played by Hoffer at the turn of the century. Presumably it was an off-hand game – can anyone identify the occasion?

Such hoaxes in chess history must be very rare.

‘After giving six simuls in England in October 1922, Capa left for the USA, arriving there on 12 November 1922, staying about five weeks, and then going home to Cuba for Christmas. Capa often left the USA to arrive in Cuba on Christmas Eve. He could hardly have been in Monte Carlo on 31 December.

If people are going to fake things they should at least get known facts correct, so that the event is plausible. Contrary to your view, I am of the opinion that many games are faked.’

In defence of our own original publication of the hoax, may we point out that our source, the Yugoslav magazine, made no mention of 31 December 1922, but merely stated vaguely that Capa went to Monte Carlo after the London tournament – which was quite plausible.

‘There’s an interesting postscript to your Nos. 318 and 368 which makes it all the sadder that the story wasn’t authentic. During the Phillips & Drew tournament in London, 1982, attempts were made to arrange a snooker/chess match between Karpov and Steve Davis. Only the fact that no date could be found on which both gentlemen were free prevented this from taking place. Each is very keen on the other man’s game, and serious efforts were made to arrange a meeting (mainly for publicity purposes, of course).’


Ken Whyld (Caistor, England) has found the Capablanca-‘Hagenlocher’ story and game on page 66 of the December 1951 Deutsche Schachzeitung, the source being given as H. Klüver’s Die Welt column. This means that our correspondent Gunter Müller was wrong in C.N. 368 to speak of ‘the end of the 1950s’. The next stage is to find out exactly when Die Welt published the hoax, and when, if ever, it owned up. In late 1951, presumably. Can one of our German readers do some hunting?


Hans-Georg Kleinhenz (Stolberg, Germany) answers C.N. 1425. A collection of Hans Klüver’s columns was published under the title Faschingsschach der Welt (Siegfried Engelhardt Verlag, Berlin-Frohnau, 1963). This book (pages 14-15) indicates that the original hoax (with the game-score given in C.N. 318) appeared in Die Welt on 30 December 1950. A retraction was published in Klüver’s column of 20 January 1951.

There remain a couple of loose ends:

a) Klüver states that the game was actually won by Hoffer at the turn of the century (see C.N. 368). Can anyone find its original publication?

b) Did the billiards world have a Hagenlocher? (Incidentally, our initial source of the story, Šahovski Glasnik, said his forename was Erich. We note that Klüver gives Gustav.)

‘There are numerous references to Hagenlacher in the New York Times of 1925-1927. The name is always spelled “Hagenlacher”, though the first name is occasionally given as “Eric” rather than the correct “Erich”.

Some references are: 1926: 13 March, page 13:3, for a summary of Hagenlacher’s career up to that point; 1925: 4 December, page 28, where the headlines of adjoining columns are “Hagenlacher Balks at Billiard Deal” and “Bogoljubow Wins Again at Moscow”; and 1927: 23 September, page 25:2, where one can read about Hagenlacher’s exhibition match versus Willie Hoppe, then turn to nearby pages for accounts of Tunney-Dempsey or Capablanca-Alekhine (Match: Game 3).

According to the New York Times, Erich Hagenlacher was born in Stuttgart, Germany, on 25 July 1895. He won the world championship at 18.2 balkline billiards by defeating Jake Schaefer in March 1926 and lost the title to Willie Hoppe in January 1927.’

Congratulations to Jack O’Keefe, who has discovered that the fake Capablanca-Hagenlacher game was Hoffer-St..... ‘played a fortnight ago at Simpson’s Divan’ (Chess Monthly, May 1880, page 276). Ellis’ Chess Sparks (page 86) gives the date as April 1880.

Slowly but surely all the key facts about this matter now seem to have come out.


As noted in C.N. 3939, on pages 273-274 of The Batsford Book of Chess Records (London, 2005) Yakov Damsky related the Capablanca chess/billiards yarn, unaware that the whole thing was a hoax. Capablanca’s opponent was named as Hagenlohen.

‘During the decade 1830 to 1840 it was considered mean and somewhat analogous to “potting” one’s opponent at billiards to adopt the Queen’s Gambit.’


A well-known chess-billiards anecdote may be recalled, concerning a person who claimed to have beaten leading exponents of chess and billiards, albeit defeating the chess expert at billiards and the billiards expert at chess. Virtually mirthless, the story nonetheless occupied much of the section on Kolisch on pages 40-44 of Chess Life-Pictures by G.A. MacDonnell (London, 1883). The book stated that in Marseilles in 1867 M. Belvoir claimed victory over Berger and Kolisch at chess and billiards respectively.

On pages 220-221 of the July 1889 Deutsche Schachzeitung the tale received 38 lines, Marseilles becoming Paris. The French capital also featured in the lengthy rendition on page 192 of Capablanca-Magazine, 15 October 1912. The following year, a version appeared with Steinitz and Roberts representing chess and billiards respectively. The person who defeated them was named as George E. Walton, the President of the Birmingham Chess Club. See ‘Billiards and Chess’ by Robert J. Buckley on page 90 of the April 1913 American Chess Bulletin.

The yarn is, though, most commonly associated with Kolisch, and it appears on page 37 of Ignaz von Kolisch schackmästare och mecenat by Sthig Jonasson (Stockholm, 1968). 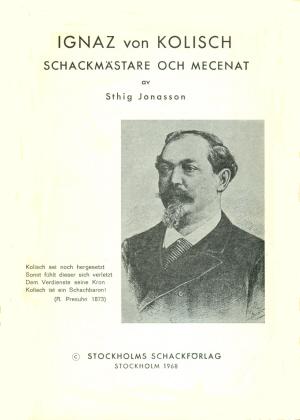 Three further references to ninenteenth-century items on chess and billiards: 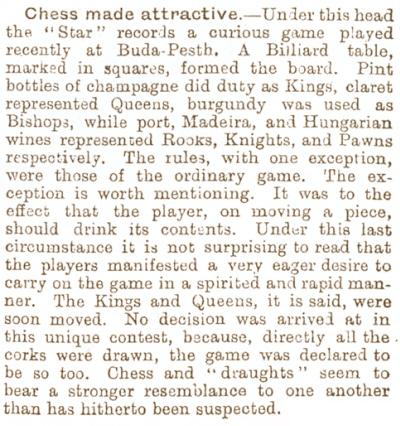 
From page 173 of All Things Considered by Bernard Levin (London, 1988) comes another (‘once’) example of how tinkering with chess can make an ‘intellectual’ writer seem anything but:

‘Fischer is not known to have done, said or thought anything at all other than about matters pertaining to chess, and once, when he gave up chess temporarily, he did nothing but play billiards for a couple of years.’