In this odds game between James A. Leonard and his brother, White’s play was ‘a text-book example of the power of the double check’ (Kurt Richter):


Below are two specimens in which a dragnet is set up by the move Qxg7+, followed by a powerful double check: 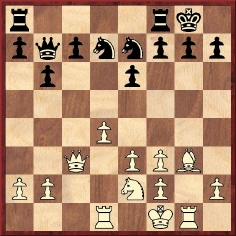 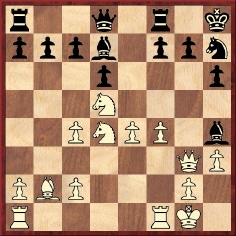 
Defining double check is tricky if all eventualities are to be covered. Some attempts are quoted here.

‘Of all the different kinds of discovered check, the double check is the most dangerous and the most menacing. For here the ‘discovering’ piece not only uncovers a check; by moving, it gives a direct check.’

‘A simultaneous check from two men. This occurs only when one man moves and checks at the same time uncovering a piece which also gives check …’

Wolfgang Heidenfeld, writing on page 88 of The Encyclopedia of Chess by Harry Golombek (London, 1977):

‘A discovered check in which both pieces check the hostile king …’

Nathan Divinsky, on page 56 of The Batsford Chess Encyclopedia (London, 1990):

‘A discovered check in which both pieces check the enemy king …’

‘This is a special version of the discovered check. It occurs when a piece moves off a line (a file, rank or diagonal) to give check, uncovering another check from a different piece behind it on the same line.’

Readers are invited to consider those passages in the light of White’s second move in the position below (which was discussed by D.J. Morgan on page 203 of the August 1957 BCM – see also Chess Life, 20 March 1954):

A further definition comes from page 248 of The Chess Player’s Bible by James Eade (Hauppauge, 2004):

‘Double check A discovered check when the moving piece also delivers a check.’

On the same page of the magazine the task of constructing a double-check position without any move by a checking piece was described by Wolfgang Heidenfeld as follows: ‘This is easy by using the e.p. capture and has been shown frequently.’ Nonetheless, as noted in C.N. 3138, Heidenfeld himself wrote on page 88 of The Encyclopedia of Chess by H. Golombek (London, 1977) that double check was ‘A discovered check in which both pieces check the hostile king …’ 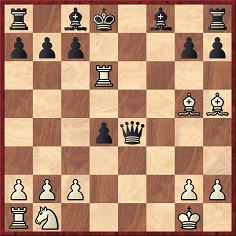 A very similar game (won by Ossip Bernstein at queen’s rook odds in Paris, 1931 against an unnamed opponent) was published on, for instance, pages 111-112 of Chernev’s 1000 Best Short Games of Chess: 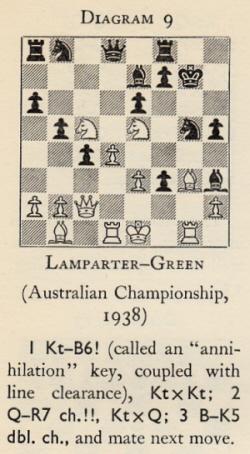 Further information is sought about this position, which was also shown by Irving Chernev on pages 12-13 of Combinations The Heart of Chess (New York, 1960): 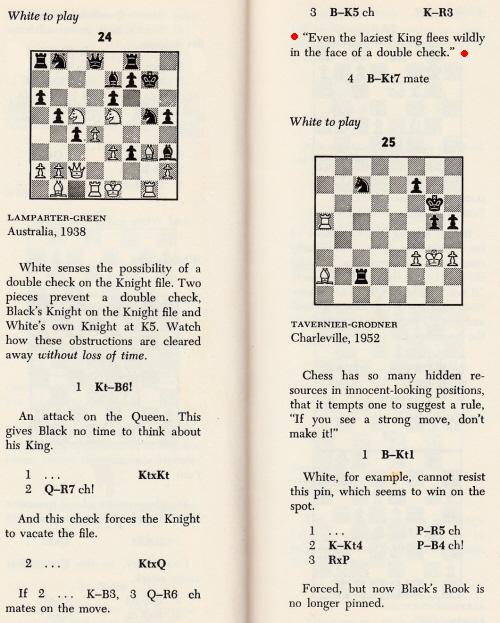 Concerning the note after 3...Kh6, it is unclear why Chernev did not mention that ‘Even the laziest king flees wildly in the face of a double check’ was a remark by Nimzowitsch. Chernev knew it, having given the attribution in an article on the inside front cover of Chess Review, November 1954: 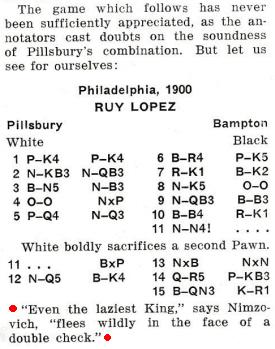 The full Pillsbury v Bampton feature was reproduced on pages 200-201 of Chernev’s book The Chess Companion (New York, 1968), and the position at move 13, when the black king flees from the threat of double check, may seem a better illustration than the Lamparter v Green position.

The remark appeared in My System, in the chapter on discovered check; page numbers vary according to the edition. On page 146 of the 2007 translation published by Quality Chess the text was:

‘Even the most sluggish king will panic – driven to flight after a double check.’

Whether a ‘perfect’ version of Nimzowitsch’s remark can be made is doubtful, but a curious point is that whereas the English translation from the 1920s (‘Even the laziest king flees wildly in the face of a double check’) is frequently quoted in books and articles, though usually without an exact reference, the original German text is seldom cited anywhere.

Christian Sánchez (Rosario, Argentina) has found the full Lamparter v Green game on page 50 of the 28 May 1938 issue of the Australasian: 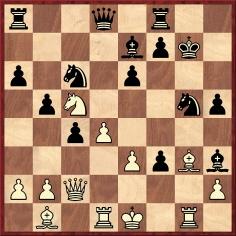 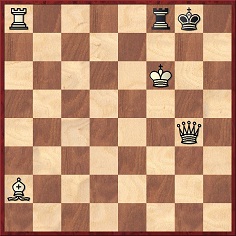 This is one of two compositions by Arthur John Curnock (‘one of the foremost Metropolitan amateurs’) on page 538 of the December 1902 BCM. The solution was published on page 141 of the March 1903 issue:

‘It is obvious Black has just played an illegal move. White compels him to retrace his move in order to comply with the rules of the game. It will be seen that as White is in check, Black’s rook must have last moved, and also as Black is in double check the king also must have moved, therefore Black must have illegally castled. Replace the pieces and it is found that Black is mated without White having to make a move.’