Gaffes by Chess Publishers and Authors

Such an oversized chess board is, of course, far less common than an incorrectly-placed one, and it would be pointless to try to record all front-cover boards with a dark square at h1. However, C.N. 4655 referred to Smart Chip from St Petersburg by Genna Sosonko (Alkmaar, 2006), which had a horizontally-reversed photograph of Tal and Spassky:

Sometimes it is the title that goes awry (e.g. with simple opening moves), as in a case discussed in C.N. 1963:

‘Grüenfeld is the novel spelling on the front cover. The back cover and spine prefer Gruenfeld. The Preface gives Grünfeld. The bibliography has Bruenfeld.’

That C.N. item noted too the book’s dedication (by Eric Schiller):

‘... in 1997 Batsford produced a reprint of Golombek’s book on Réti, putting “Golmbek” on the frnt cver.’

John Nunn gave an account of the matter on page 283 of his book Grandmaster Chess Move by Move (London, 2005):

‘David Cummings proudly gave me a copy of a book I had edited, Richard Réti’s Best Games (by Harry Golombek), which had just arrived from the printer. I pointed out that they had spelt the author’s name “Harry Golmbek” on the front cover. David Cummings, who did not come from a publishing background, had assumed that if you hand a cover designer a disc containing the cover text, it will come out correctly. Needless to say, the books went out with “Golmbek” on the cover.’

As mentioned in C.N. 2703, there was also a misspelling (‘Golembek’) on the dust-jacket of the first US edition of Capablanca’s Hundred Best Games of Chess in 1947. C.N. 3226 noted that the second edition of The Game of Chess by Harry Golombek (Harmondsworth, 1963) referred on its back cover to ‘Dr Golombek’.

With regard to the above Batsford mishap, C.N. 2397 added:

‘The company re-offended in 1999, with a book on the Two Knights’ Defence which named one of the two authors as Beliavksky.’

‘Gerard O’Reilly (Oxford, England) refers to volume one in the Pergamon Comprehensive Chess Endings series (on bishop endings and knight endings). On the front cover, back cover and spine (although not on the title page) Chekhover’s name is written “Checkover”. The latter spelling, our correspondent observes, “invites a poor pun on how the publisher could easily have avoided”.’

Another case regarding the author’s name is the title page of Gran Ajedrez:

Sometimes a publisher offers variety. International Chess Congress, London 1922 edited by David Regis (Aylesbeare, 2006) had E.R. Tinsley on the front cover, E.H. Tinsley on the title page and (accuracy at last) E.S. Tinsley in the Foreword.

A player’s name in the title may go wrong:

[In C.N. 6045 Anthony Wood (London) mentioned that the spelling ‘Trompovsky’ was deliberate on the part of Julian Hodgson, who wrote on page 8: ‘... the opening was actually named after Octavio Siqueiro Trompowsky, one time Brazilian Champion, who popularised it in the 1930s and 1940s. For simplicity’s sake I have renamed the opening itself phonetically Trompovsky ...’]

Here is the cover of a book published in Hungary in 2008:

Faulty titles in English and French

It is even known for a publisher to misspell its own name. As mentioned on page 288 of Kings, Commoners and Knaves, the following appeared on the title page of the 1973 edition of a Capablanca book, Lecciones elementales de ajedrez, published by Ricardo Aguilera:

Many books from India are devoid of effort. In C.N. 5658 Tony French (Worthing, England) referred to a volume published by Pankaj Books which named Philip Robar as its author, Important End Games in Chess (Delhi, 2002):

As shown above, on the front cover the book commended itself thus:

‘A Collection of must Common endings and how to Conduct through them.’

The above specimens have, alas, barely scratched the surface regarding the merchandise which some publishers invite the public to buy, and a later article will examine another aspect: the irrational praise which book covers sometimes bestow upon their authors. The gruesome subject of blurbs and hype will, for example, expand upon our reference in C.N. 2377 to ‘the self-glorification in which Cardoza Publishing has recently allowed its chess writers to indulge – dregs pretending to be cream’.

Concerning the billiards event, particulars from contemporary sources will be welcomed.

A new edition of What’s What, slightly amended, has just been published under the title Mr Hartston’s Most Excellent Encylopedia of Useless Information. 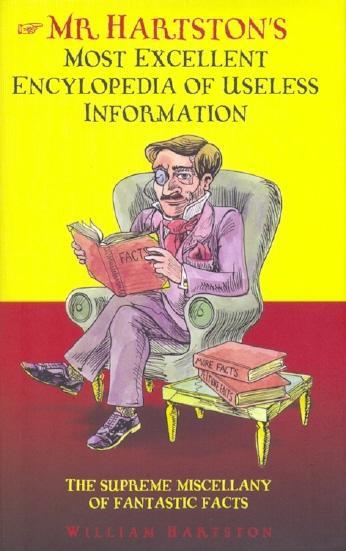 The fact that the title has the spelling ‘encylopedia’, and not encyclopedia, throughout (on the dust-jacket, the cover, the title page and the running head on odd-numbered pages) is likely to be regarded, in a Hartston volume, as an in-joke. After all, the back cover of his 2004 book What Are The Chances Of That? mentioned that his surname is often misspelt, whereas the title page appeared thus: 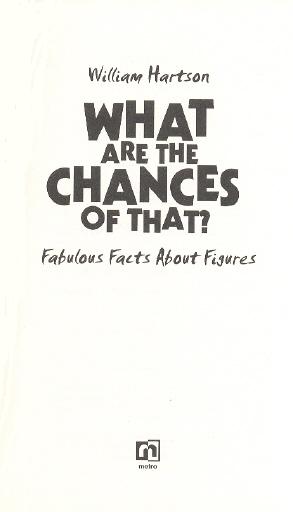 ‘The spellings were not in-jokes. The missing “c” in encyclopedia was just a huge blunder by the publishers. Anticipating questions about it, I prepared two answers: a) it’s the American spelling; b) it’s a deliberate misprint in order to make the first edition more valuable.

The misspelling of Hartston was just as accidental, and slightly less forgiveable. I never saw the title page of What Are The Chances Of That? pre-publication, so did not have an opportunity to spot the misspelt name. They did send me a copy of the jacket of the “Encylopedia”, but I suspect that I was so relieved at seeing Hartston spelt correctly that I did not notice the blunder.

If there is another edition of What Are The Chances Of That?, I shall include in the entries for the numbers 1 and 216:

1 – number of “t”s missing from Hartston in the title page of the first edition of this book.

216 – number of times “encyclopedia” is misspelt in Mr Hartston’s Most Excellent Encylopedia (sic) of Useless Information.

On the subject of spellings, I now understand that the French billiards player I mentioned was (Albert) Garnier, not Gamier.’


It was commented in C.N. 4389 that chessboards with a black square at h1 are too frequent an occurrence to be noteworthy, but how often has the mistake happened on the front cover of a chess book? The only instance that comes to our mind is ¿Quiere usted aprender á jugar al ajedrez?, an anonymous, undated volume published in Barcelona in the Willemanns collection: 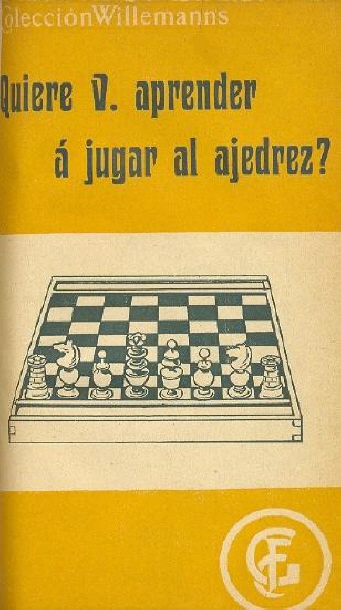 The faulty picture also appeared on page 8, but the text itself indicated that h1 should be a white square. However, the book’s only diagram with pieces was the following (on page 12): 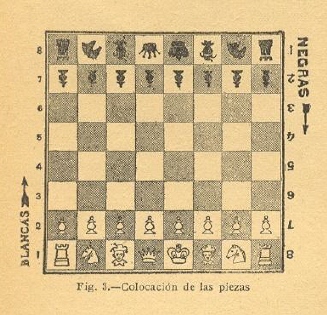 ‘By coincidence, the subject of chess book covers with a black square at h1 received a brief mention on page 38 of the October 2006 issue of CHESS. The three books mentioned there are Morphy’s Games of Chess (the Löwenthal edition of 1860), Bird’s Chess Masterpieces (1875) and F.V. Morley’s My one Contribution to Chess (1947). John Sexton’s suggested explanation for these oddities, that they arose through a misapplication of standard black-on-white print technology to the gilt inlay used on these book covers, is almost certainly correct. There may well be other examples.’

Looking further into the matter, we note that gilt inlay often resulted in the board error. For example, it occurred in subsequent editions of the Löwenthal book, including, even, the 1985 Batsford reprint. It is also worth comparing the front cover and the title page of another book by Bird, The Chess Openings, Considered Critically and Practically (London, 1878): 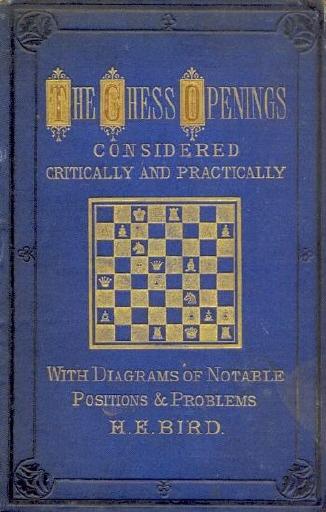 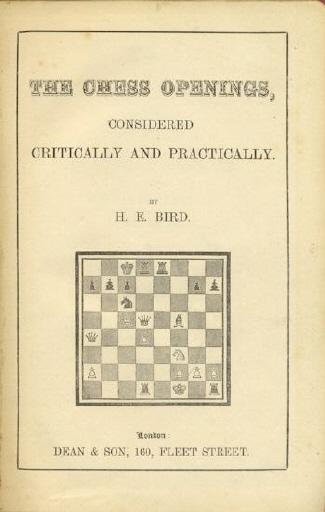 Further cases of a dark h1 square on front covers using gilt inlay include Chess: Its Theory and Practice by Captain Crawley, The Book of Chess by George H. Selkirk and Traité-manuel des échecs by Henri Delaire.

Another cover oddity concerns books by James Mason (The Art of Chess, The Principles of Chess and Social Chess). They had a 7x7 chessboard: 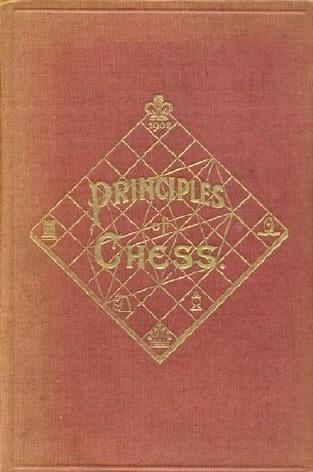 
In an item on page 8 of the Winter 1995 issue of Kingpin (see too page 280 of Kings, Commoners and Knaves and Chess Jottings) we wrote:

The ‘Champion Endgame Series’, published in the United States by Sergey Akhpatelov and Stephen Gordon, consists of monographs on Steinitz, Lasker, Capablanca, Alekhine and Euwe, with more threatened. Steinitz’s forename is misspelled (‘Willhelm’) on the front cover of volume 1. The other books have a few lines of career information, seldom accurate. Lasker's death date is wrong. Capablanca’s 1921 score against Lasker is incorrect, as are Alekhine’s birth and death dates. We learn that Alekhine ‘died March, 25 1946 in Portuguese’ and that he ‘won in 49 large toutnaments’ [sic]. Lasker ‘won in 13 large toutnaments’ [sic]. Twice in the Euwe volume (once on the front cover) the Dutchman’s year of death is given as 1986, instead of 1981. 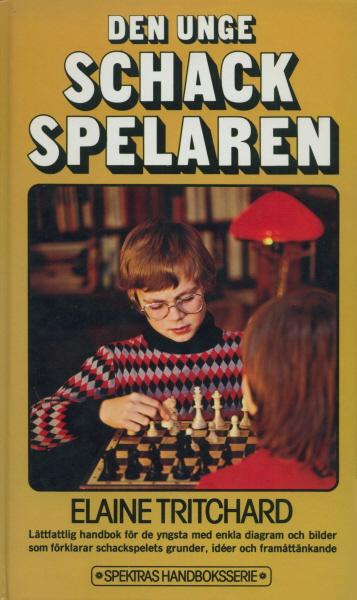 
Another case is Opening Tactics for Club Players by ‘Sergio’ Samarian (London, 1980). That was the misspelling of the author’s forename on the title page and imprint page, whereas the dust-jacket was correct: 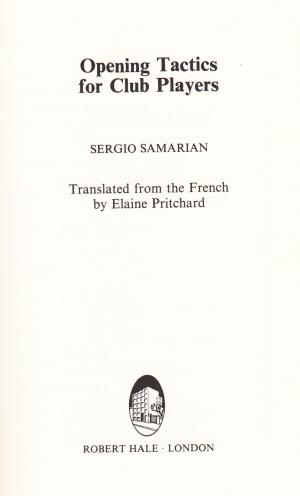 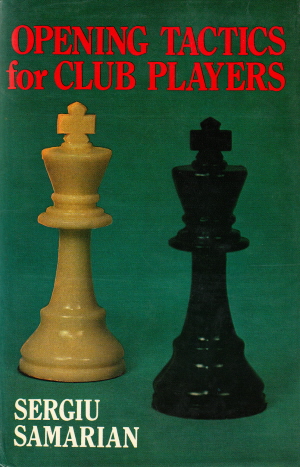 Wanted: information about the French text which Elaine Pritchard translated.

Below, from our collection, is an inscription by Samarian in one of his other works, Să învățăm metodic șahul (Bucharest, 1965): 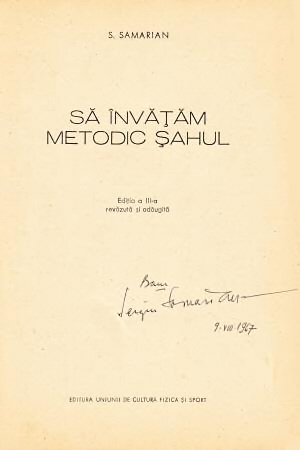 Sergiu Samarian (1923-91) was a prominent Romanian figure but had no entry in the country’s standard chess encyclopaedia, Şah de la A la Z by Constantin Ştefaniu (Bucharest, 1984). Has the omission ever been explained (e.g. on the grounds of Samarian’s emigration to West Germany)?


The mistakes in players’ names and game venues in Draw! by Leonid Verkhovsky (Milford, 2014) are so numerous and obvious that we do not intend to list examples unless challenged to do so. The imprint page states, ‘Editing and proofreading by Peter Kurzdorger’. A former Editor of Chess Life is Peter Kurzdorfer.


Capablanca’s book on Havana, 1913 (Torneo internacional de ajedrez) has been reprinted by Ishi Press International, though not from the original. As shown by, for instance, the handwritten markings on page 35, the Google scan freely available on-line has been used. The group photograph on the front cover is our scan from the original book, as given in the feature article on Juan Corzo.

‘This book is remarkable because is [sic] was unknown or almost completely unknown until it was discovered by Stuart Dill.’

The next sentence states that Capablanca also wrote ‘A Premier of Chess’.

Two of the three pages comprising the Introduction are merely about Abraham Kupchik. Then come two pages of biographical notes about the eight contestants (‘Compiled by crawfb5 Larry Crawford on chessgames.com’).

The back cover has a crass blurb in Spanish, with the accent on the -ish, which concludes:

To revert to the first quote above, the claim about Stuart Dill’s supposed discovery is inexplicable, as the Havana, 1913 book was already well known before the Ishi hash. The original Cuban edition has been reprinted in recent years by Moravian Chess (undated). In 1978 a reset Spanish version was published by Radio Rebelde, Havana. In addition to the 1976 English translation by Edward Invierno, there is an Italian edition, by Piero Angelini and Maurizio Martelli (Rome, 2003).


An addition has been submitted by Javier Asturiano Molina (Murcia, Spain): This translation of Steiner’s well-known book was published in Madrid in 2004.

Javier Asturiano Molina draws attention to the front cover of the Cuban edition (Havana, 1961) of a book by Benito López Esnaola: